My words for November

Hello and welcome to my 'November's words and photos' I hope you enjoy! 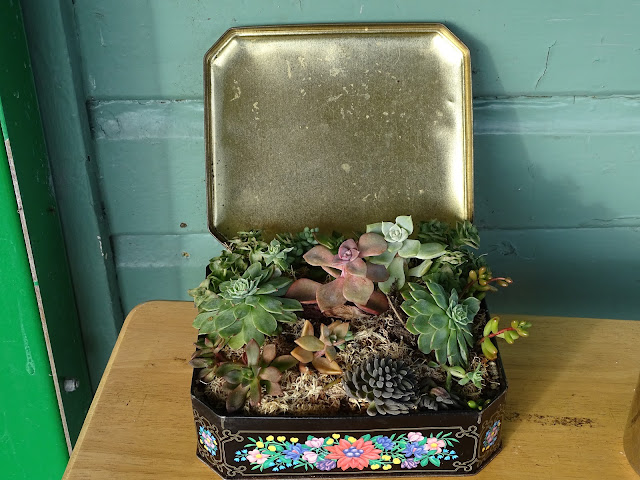 This is one of those ... you'll do nicely ... photos. This little biscuit tin of happiness is not one of mine but I think I would like to do something similar.
Let me explain - I walk (at the 'safe and recommended' distance) with a friend of mine as part of his support bubble. We try to get out once a week and walk and talk and set the world to rights. One essential part of our walk is to go to a cafe or two and purchase a hot chocolate as a take-away. He wants to make sure that they are still supported during the lockdown. This particular cafe is in a lovely Victorian style tennis pavilion on the edge of a beautifully maintained park. The masked customers have to queue outside at the regulation 2 metres apart and to keep them 'entertained', the owners have put up chalk boards with silly quips and quotes and this lovely little tin filled with succulents. It makes me smile every time :)
Ring/s 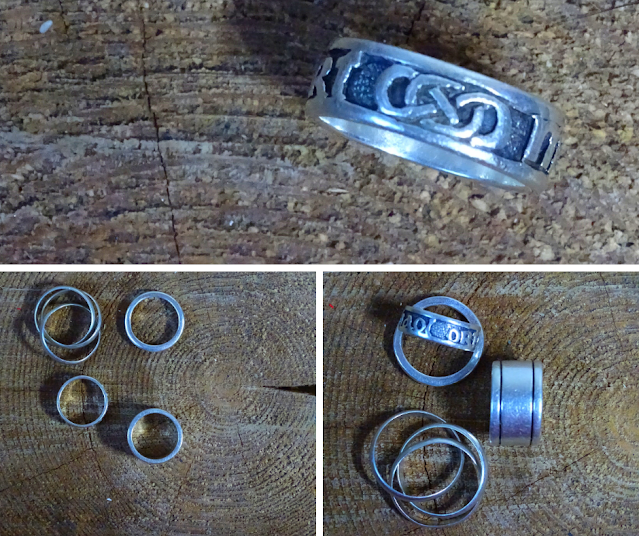 My go to rings - my core favourites, my armour.
A sterling silver Russian wedding ring also known as a triple rolling ring representing the past, the present and the future.
Next, the Hebridian Celtic wedding ring - Mo Ghaol Ort (pronounced mo gool orched as in 'torched') which translates as 'My love on you', bought for me by Himself a few years ago and worn as my main wedding band.
Finally the Mexican silver man's little finger ring and Mexican silver wave ring both bought because I love the strength they impart - like I said - my armour.
I do have others, mostly in silver, a few in gold, some inherited, some gifted. I try to wear them all over the course of a year but these four - these are part of me.
Harbour 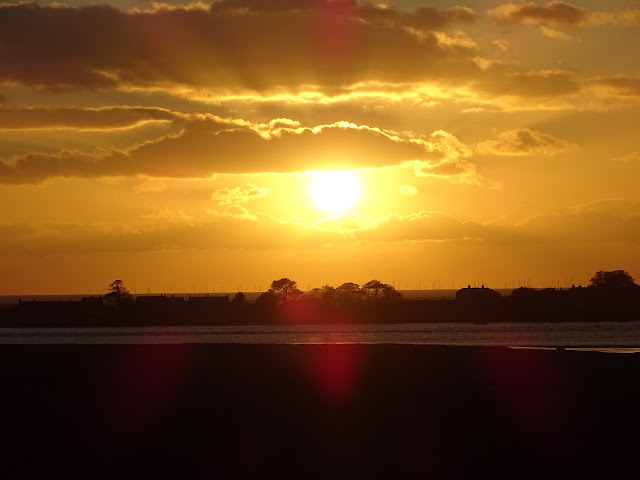 The small village of Sunderland Point on the Lancashire coast is a sleepy and rather cutesy seaside village with a dark history. It also has the strange accolade as being the only village on mainland Britain which has tidal access cutting it off twice daily.
In the early 18th century it was developed as a trade harbour for the city of Lancaster and the north west. Originally boats would come in on the tide, become moored then be off loaded, and when the tide came back in, the empty boats would leave. However as boats got bigger a new set of docks was constructed around the coastal corner nearer the sea. Leaving this little village to quietly fade.
It also had a rather historically nasty name as a good place to press-gang young men into the navy with local place names confirming this nefarious activity - Snatchems and Catchems ... yes, they really do exist.
Sunderland point also had an active hand in the slave trade being the third busiest port for this dreadful trade.
There is a small but lovingly attended unconsecrated grave for a young slave who died whilst waiting for his master to return from a business trip. You can visit this grave where it is adorned with painted pebbles and tributes to the needless loss of a stolen young life. 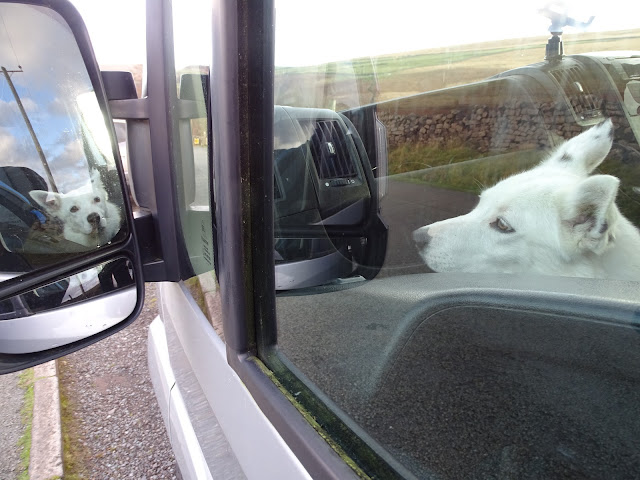 For this prompt, I did have in mind my front window as at the moment it pleases me greatly however, this quick snap pleases me more!
It is a silly dilly dog (in)patiently waiting for her walk. We, Himself and I, were booting up whilst sheltering in the lea of the van from a bitterly sharp breeze. I had put Moss's collar and lead on her and shut her in the cab so that I knew she was safe and would not wander off in her eagerness to get out on the hills. As I slung my camera around my neck I noticed she was watching me - through the window via the rear view mirror.  She had her slightly 'worried-ears' on when she thinks that we just might not take her with us as we go for that all essential dog walk! (Don't worry Moss - the clue is in the name!) 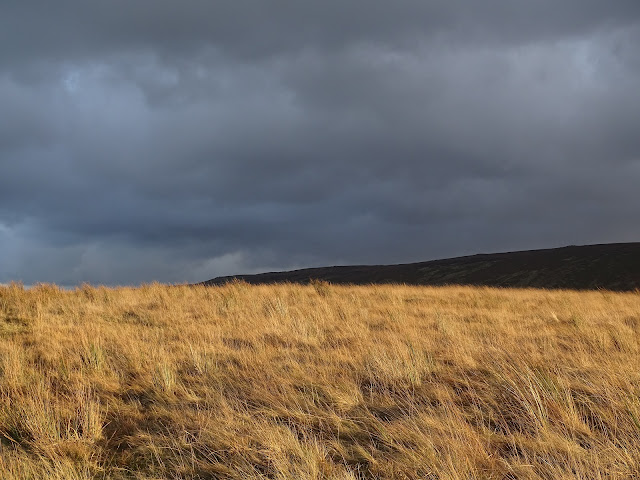 Last weekend, Himself, Moss and I decided to throw caution to the wind and just get out of the house and on to the moors. A week of rubbish weather and work had kept us inside longer than we really wanted to be, so all three of us were so ready to take (more or less) what the weather was to throw at us. The sky was a turbulent tumbling of sullen clouds being harried and hurried by a brisk and blustery wind. Showers flew around us and somehow we managed to avoid being doused, until we'd reached our furthest point . The sky was just too menacing to risk being out and exposed on the moorland meadows, so we ducked into a forest and only just in time - a heavy shower of hail pelted our shelter and despite the thick tree cover we were also dusted in icy pellets. We pressed ourselves against the trees and listened to the hammering above us - our eyes shined and we were grinning like loons - it had been the right decision to get out and get weather-beaten and that mug of tea and fruit cake waiting for us at home would be the nicer for our adventure! 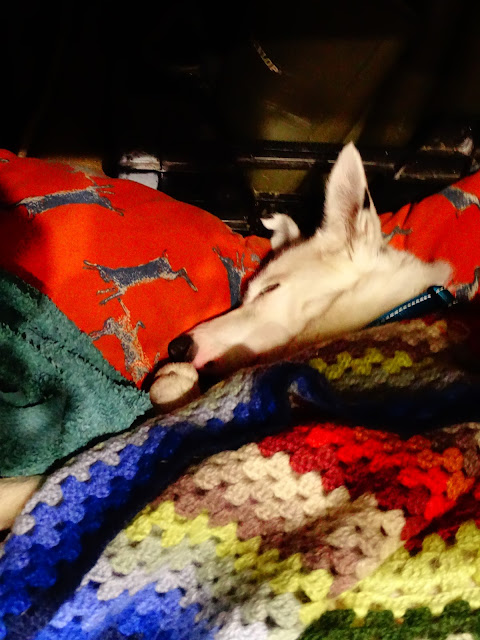 A very tired Moss, after a long and happy (read that as wet and muddy and stick filled) walk during one of our camping weekends.
She'd eaten her food and flopped into her bed in the van. She sleeps under our bed on her favourite cushion. I love the way it looks like she is sucking her thumb - but if you look at the second photo - that foot tucked up under her nose ... is her left BACK foot, her front feet are stuck forward across her bed! And yes she is tucked up under several layers of crochet blanket and dog towels - I didn't want her to get cold after all that running around - Himself hurrumphed at my 'fussing' but the dog did not move until the next morning - so she must have been so snug and warm. 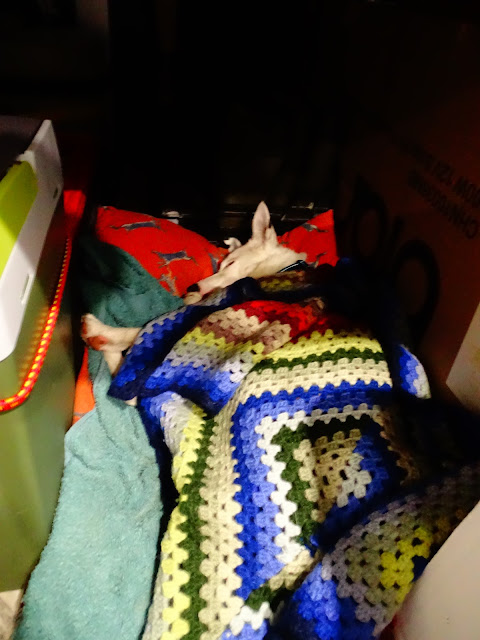 Thank you for reading my mini stories - now it is my turn to go and read yours ! Have yourselves a lovely weekend xx
PS I have just realised that all my stories are either walking or Moss related or both! Oh well, I suppose both of those feature greatly in my life :D
at November 26, 2020
Share