Down to the sea and the sky

The question is - how to top yesterday's walk? 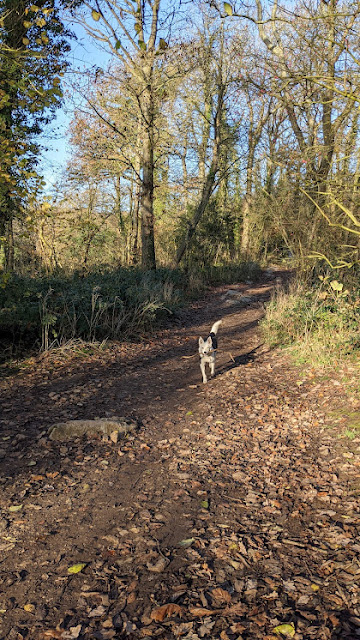 Well, that was easy - do another one, only this time add in the sea and the sky, include woodlands and monuments, count on the sunshine and top up with the freshest of fresh air and the best of company (oh yes and take a dilly dog!) 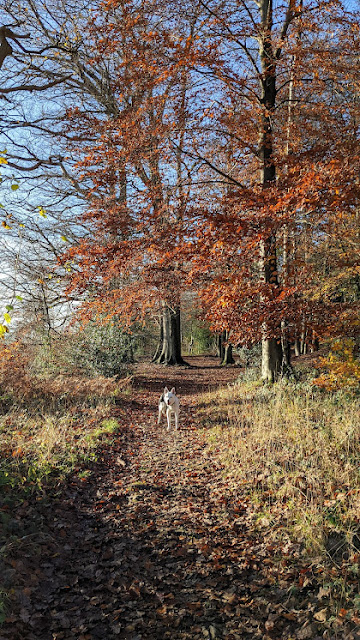 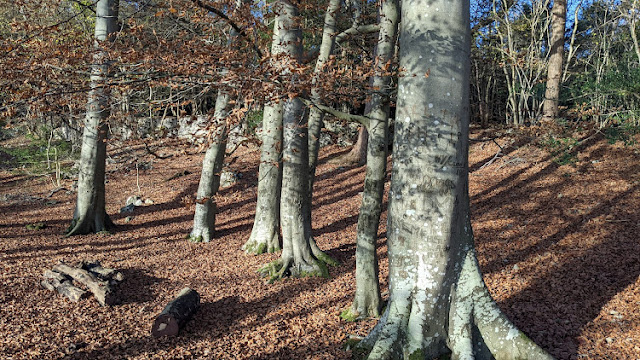 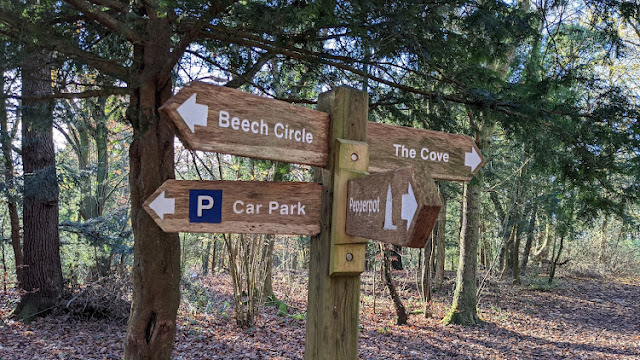 We started at Eaves Woods again except we turned left into the woodland - opposite to yesterday's path and meandered our way gently upwards to the summit where there is a monument for Queen Victoria's golden jubilee, dated 1887. 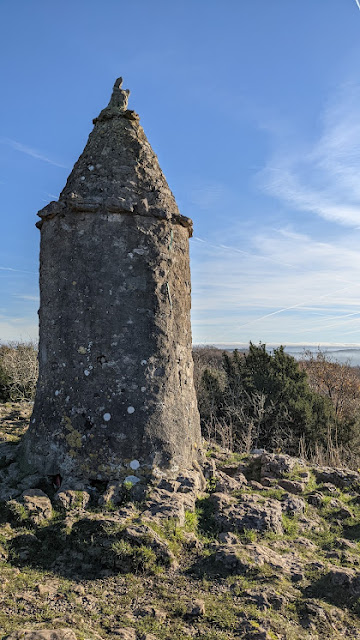 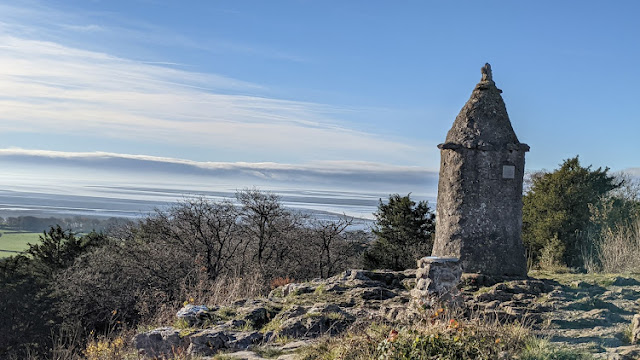 Despite several folk milling about, there was a gentle silence as we all appreciated the view over Silverdale and the sea. The crisp blue light filled the sky with silvery clouds drifting across the horizon. 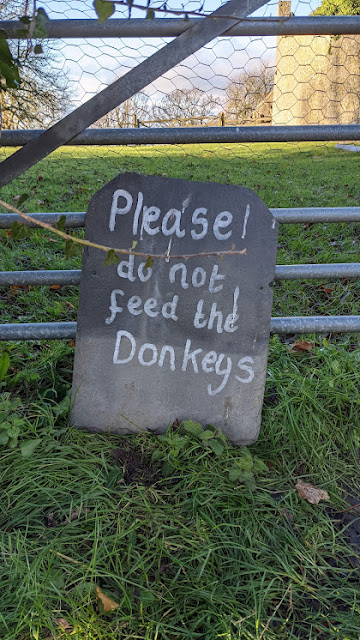 We dropped off the crest and back into the trees, following the path down to the coast. Meandering through pretty lanes and wistful cottages we stumbled on a long coastal stretch of open access - which to non uk folk means land you can walk on without restriction or pathways at your own risk but equally for your own pleasure. And what a pleasure it was. We found ourselves a limestone outcrop and sat down, poured a large mug of tea and nibbled - yes you guessed it - fruit cake. We gazed over the sea and watched Eider duck and cormorants bobbing on the gentle swell while the sun left the most glorious glittering light on the water. 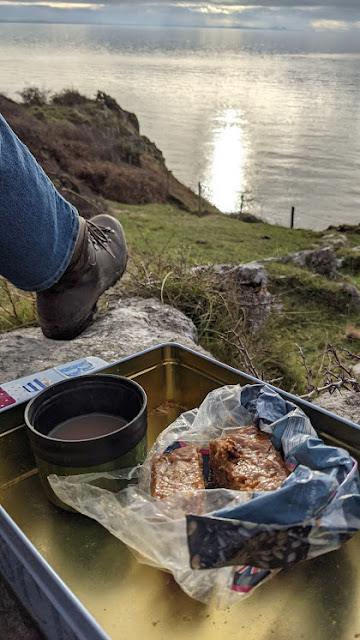 We lingered in the sunshine - on a surprisingly warm afternoon for November - for quite a while. Moss, muddy and happy was asleep leaning up against my back, it seemed a shame to move on, but we knew we must and besides there was so much more to explore and discover! 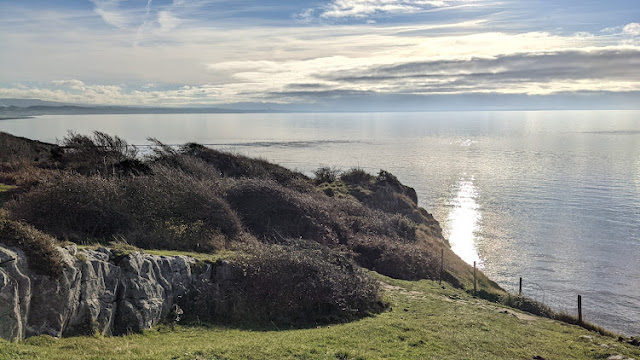 Around the corner the track dropped right down to the sea, past Jenny Brown's Point where Moss just had to have a dip which had the wonderful 'side affect' of removing most of the mud! 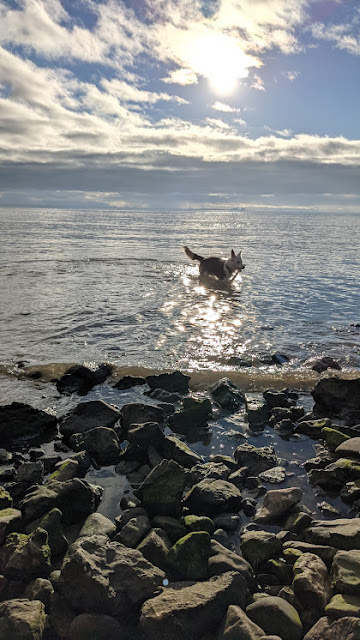 We returned to the track which lead to a set of pretty cottages known as Brown's Cottages. Just past them was a huge limestone chimney - which apparently was built (mistakenly) as part of a copper smelting mill in 1780. 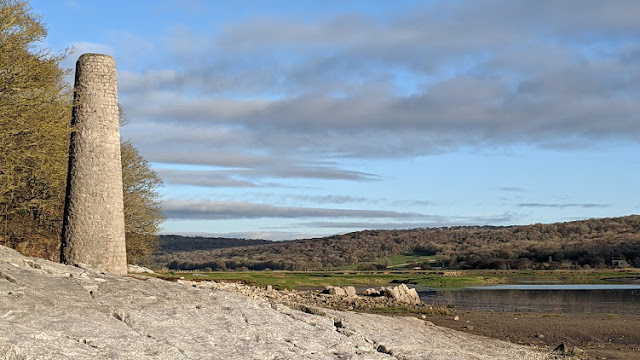 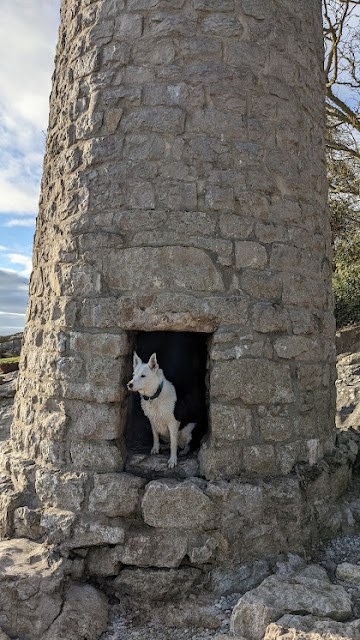 The path followed inland along the estuary towards the nature reserve we'd watched the murmurations the night before then it dipped back in and out of woodland and past more lovely houses and gardens. 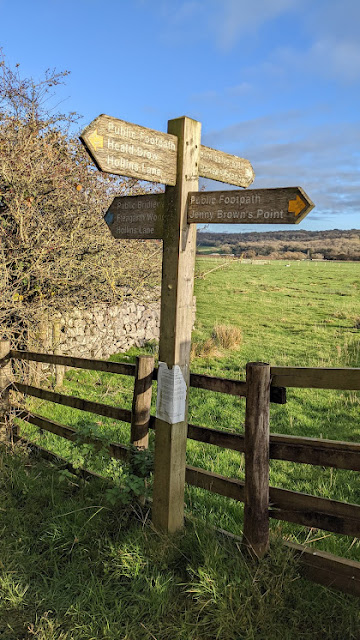 As we walked Moss dragged me over to a lady to say hello (not something Moss does normally) and we ended up chatting to a sweet old dear, for about 20 minutes, who reminisced about her dogs who'd both reached the ripe old ages of 14 and 15. 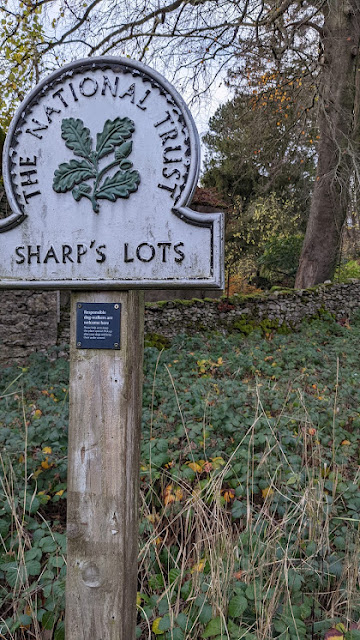 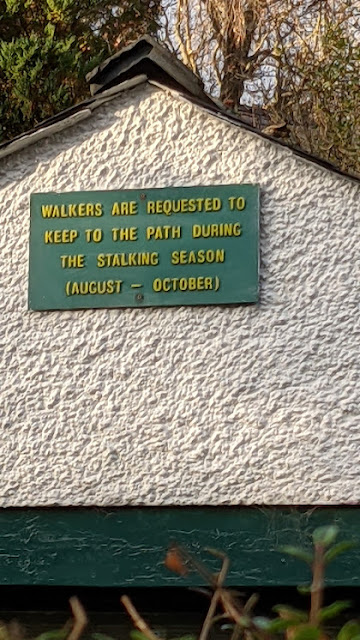 After five hours of glorious walking we finally returned to the van and guess who was there?!?!
It was only the robin - professing it's extreme state of starvation and that it had not EATEN for A WEEK! So I crumbled some cheese and fruit cake .. 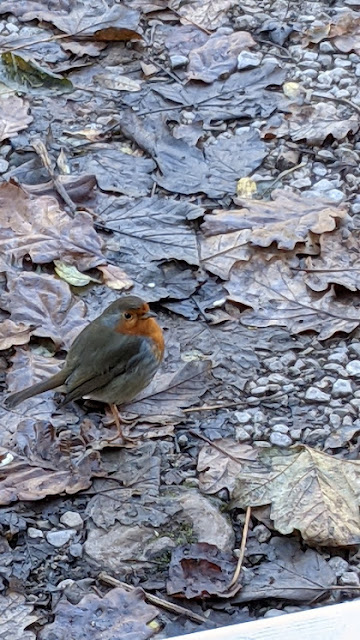 Regretfully but replete we set off back for home - we'd had an amazing micro adventure over the last couple of days, glorious walks, beautiful scenery and we left behind a rather well fed con artist!!
#moreblogvember
at November 25, 2021
Share