I thought you'd like a quick update on the saga of the squizzers.

The smaller one very quickly recovered himself and reverted back to being a wilding and kept a sensible distance, he still would still come for food from the shelf Youngest made and then after a day or three - was gone.

The larger lad (the one with the bloodied nose and suspect concussion) hung around, quietly hiding in the foliage, following at a safe distance and quietly appearing and asking for something to eat. He struggled to get up the tree without slipping.

As he healed, his bravado blossomed - considering we wanted him to follow his brother and skip off to pastures new - he chose to stay.

I was concerned that as he now was conditioned to think humans = food = kindness etc that he would assume that all humans were 'safe'. So we kept him fed so that he would not go off and ask some one else while I thought how we could get him to 'rewild' safely.

Then I had an idea - if we had a way of feeding him where we, the humans, were not involved then hopefully he would not come to us when he was hungry but choose to 'feed himself' in safety... 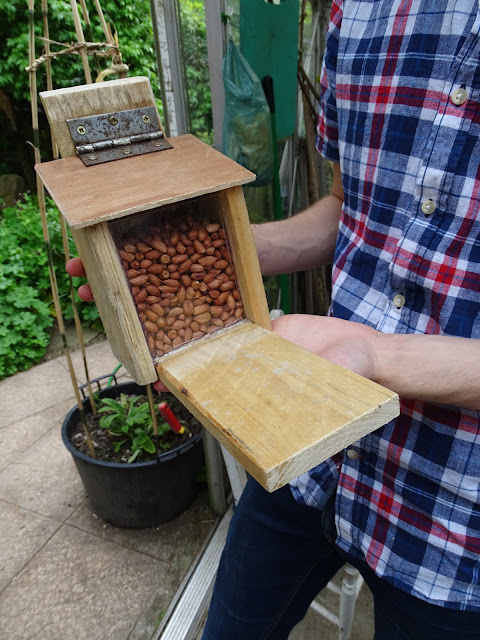 And Youngest made it beautifully! 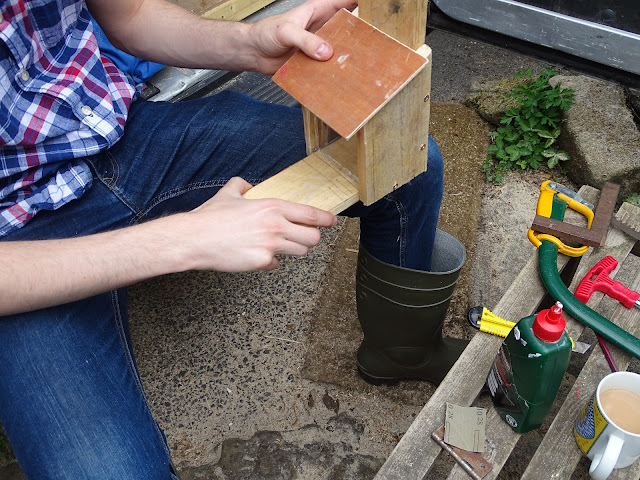 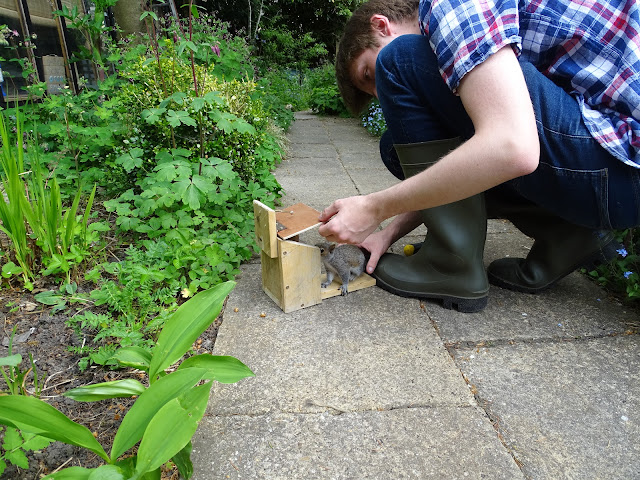 A wee beastie who once he'd inspected the nutstore, 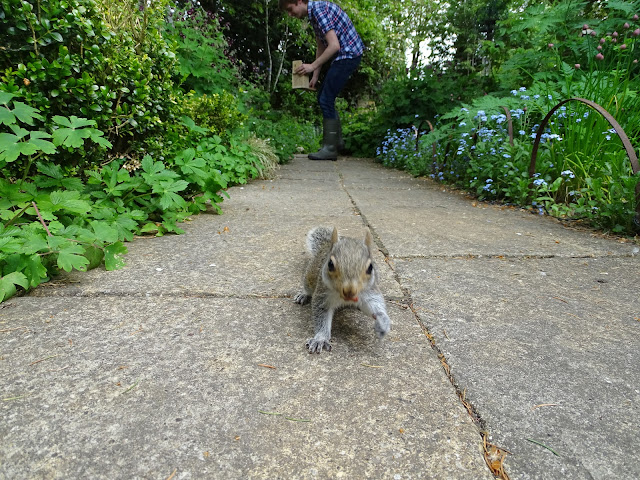 helped himself to one and scampered over to me, 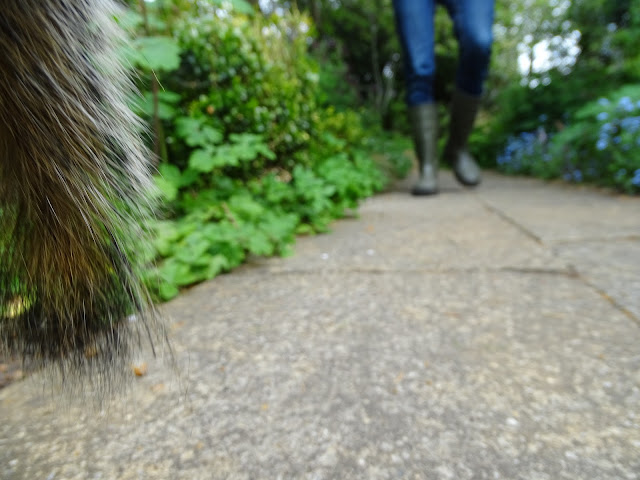 Jumped up on my camera and nibbled to his heart's content! 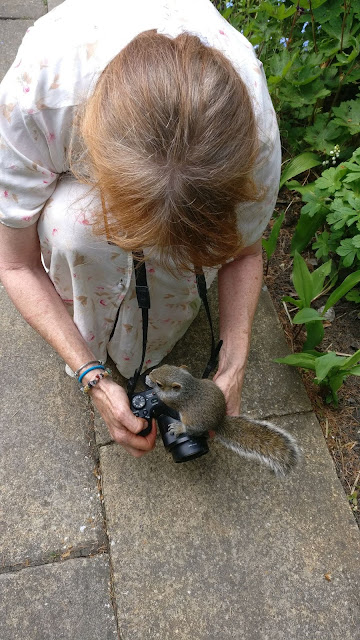 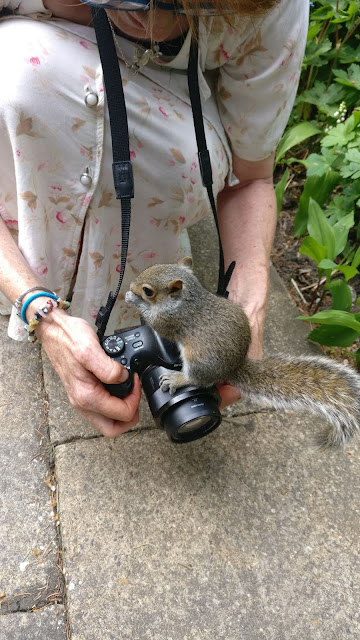 The last three days have been lovely - he has 'fed himself' without having to find us, he has started to explore the garden and seems to be ranging further and further and being 'all grown up and brave'. 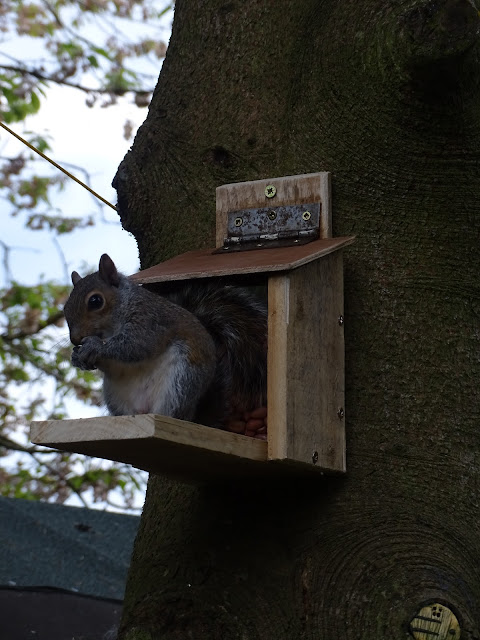 There has been one lapse in that transition into being a wild squirrel and that happened today....

We had a short sharp shower and the garden was wet with dripping plants hanging low. I was down at the end of the garden emptying a weed bucket into the compost when I heard a rustling in the trees behind our fence. I looked up and saw a small and slightly soggy squizzer. He sat up and put both paws up to me - ran up my arm and sat on my shoulder, holding on to my hair. He quietly chattered at me. So I walked back up the path to 'his' tree, lifted my hand up and pressed it to the bark. The little lad scampered up my arm and straight on to his nutfeeder - happy squizzer!  He did not want to get any wetter working his way through the garden!

One final photo - taken the day Youngest made the nutfeeder .... a small and rather warm squirrel having a peanut stretched out on his shoulder. The naughty squizzer was using his back feet to hold on to Youngest's collar to prevent slipping off! What a cheek! haha 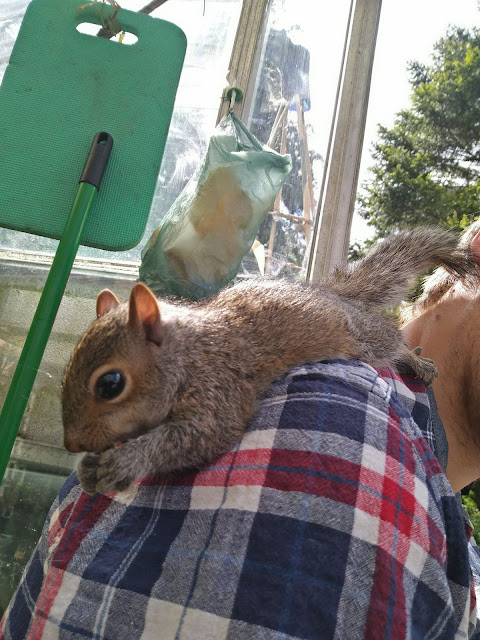