The door clanged open - it has a distinctive sound as it swings wide then clacks shut. I was in the dispensary completing a parcel for a farmer and could hear a gravelly voice speaking to my colleague. I continued with my task in hand when I heard my name being called....
I turned to see a grizzled elderly fellow with a scowly face leaning over the reception counter. His tweed cap and jacket having seen better days were now faded and tattered and his work trousers were covered in muck. I drew a deep breath and went to see if I could help.

The old chap frowned at my cheery greeting and sighed. He started again.....he needed  '  t noyst fer is effa t woon tha were tha green in. Tha wuld know it were t betterun than t newun'

I looked at my colleague who gave me a winning smile and completely confused eyes and said - that's why I called you - I knew you would know...... (great I thought). I turned back to the farmer and asked if he had had it before?

He gave me a long hard stare and said...'ay, t vit brung it round las wek an ee ad used it then but t effa were down agin'
(ok so that question didn't give me any clues as to what he needed)

Then he said.....t vit sed it were in t dispensy fer my an t make sure its t green in'

OOooooh I replied - I know what you're after, excuse me (so that's who the lump of metal equipment on the dispensary floor was for!)

I lifted up the cow hoist and yes it was the green one, the old one which works far better than the new one.  It was the one the vet had taken to the farm to help lift up a down cow and here was the farmer, to borrow it again....now why on earth didn't I get that in the first place?!

I struggled to lift the wayward metal hoist to the waiting man as I offered to carry it to his van. He, with a swing of one hand lifted if off me with ease. He must have been about 70 years old. His eyes deep in his creased tanned face twinkled at my girly weakness, the initially cross demeanour, ingrained with years of toil and hardship lightened up at my apparent ineptitude as he said..na then lass thy needs t git more muscle gi it t me befer yer ert yessel'

All the while I could hear my colleague trying to stifle laughter and failing dismally. Hmmmm. 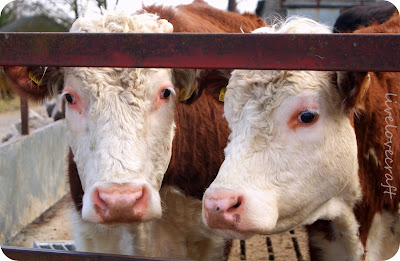