Wow - what a beautiful May it has been - so much sunshine (and not a lot of rain) my poor vegetables have regularly needed a good drink!

I am looking forward to seeing what everyone else has posted :) remember June's Scavenger Hunt words are 'going wild' themed and have now been added to the side bar - have fun with them!

Bark
Not far from us is a small nature reserve with a mixture of trees. I love the mature bark of the Silver Birch. The deep fissures and cracks in the silvery bark reminds me of Runic writing. The Silver Birch is also known as the Lady of the Woods and is a 'pioneer species' as it is one of the trees to first colonise sparse areas. It is such a tactile bark. Love it! Weave
A couple of years ago, during a particularly gorgeous early summer in June, we were on holiday and came across this little fisherman's cottage completely covered in fabric. We were stunned and just had to stop and investigate further. A number of other folk were doing the same. Standing around the corner and 'holding court' was the artist, who was dressed in the same fabric. She explained that it was an art installation to highlight the issue of both weavers and fishermen and their declining value in society with both woven cloth and fish being outsourced by a cheaper supplier. Although this installation was up in southern Scotland, the mill she'd commissioned to weave the cloth is not too far from us down here in Lancashire. 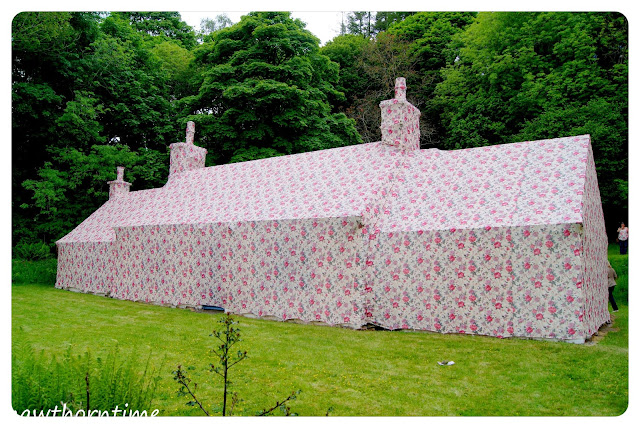 Vast
Last summer, the sky was filled with the most gargantuan storm clouds, they swirled and billowed and grew to astronomical proportions. I watched (with camera ready) to capture any electrical excitement ..... nothing. Pah.
The clouds then melted, almost like ice cream and drifted off - pathetic!! I had to put in two photos for this one, sorry - broke my own 'rules' but one picture didn't seem to give the sufficient effect of the vastness of tumultuous cloud activity. 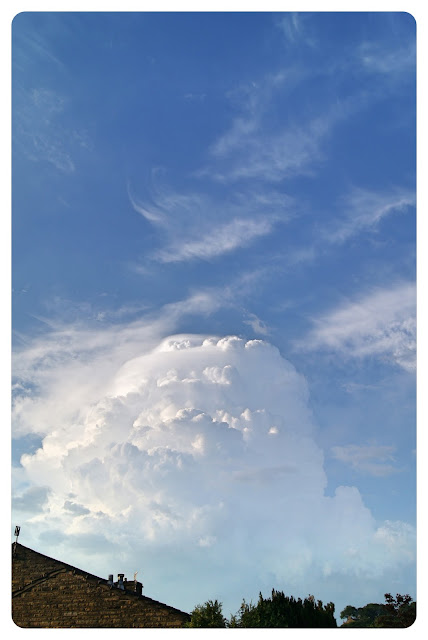 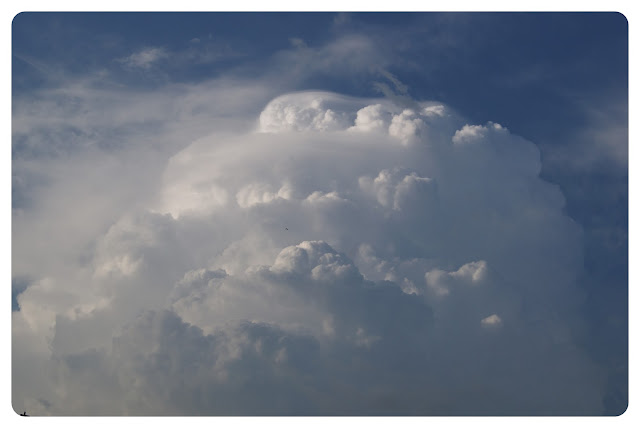 Lichen
We'd been walking in the Galloway Forest, the summer had been particularly moist (ok ok - it rained a lot!) and the trees were dripping wet but were draped in gorgeous curtains of moss, reindeer moss and swathed in lichen. Reindeer moss is also known as reindeer lichen, which is more correct as it is not a moss at all! 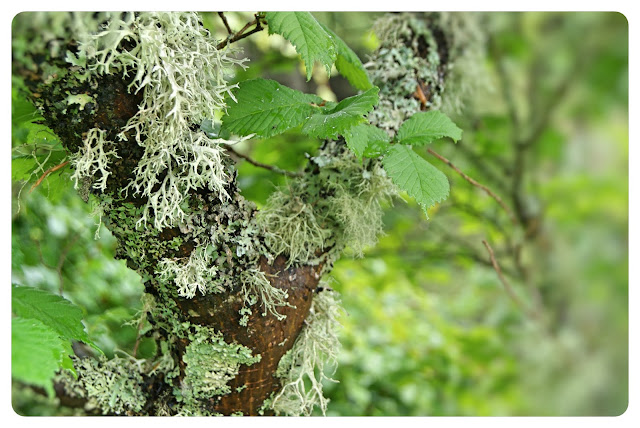 Silhouette
This silhouette of a man striding towards the setting sun on the longest day 2015, is my man.  We wild camped on the side of a hill that night, watched the sun set and the moon rise. Felt the downdraft of an owl's wing and watched the mist clear as the sun rose. My heart still aches at the beauty and the splendour of that night. 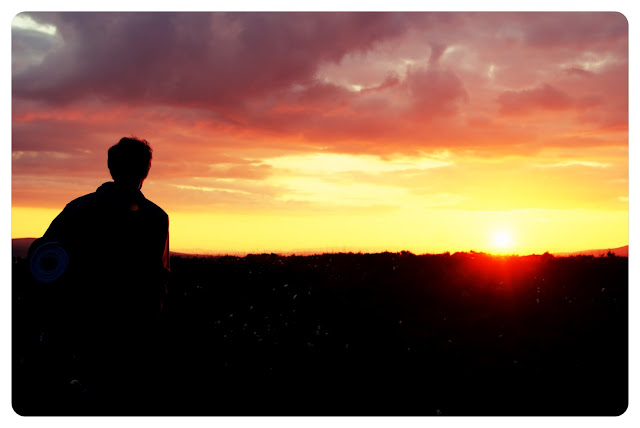 Glass
So many of this month's images are from the archives, this one is no different. In a small Scottish village was a secret garden where we sat and ate our lunch. We'd never have found it if the shopkeeper who we'd just purchased some bread from, hadn't given us directions. In the garden were a number of mosaics influenced by the area's industries and wildlife. I loved the irridescent glass used for the jumping salmon. And, when it rained (which it did a lot that holiday if I recall!) the glass shone out and sparkled beautifully. 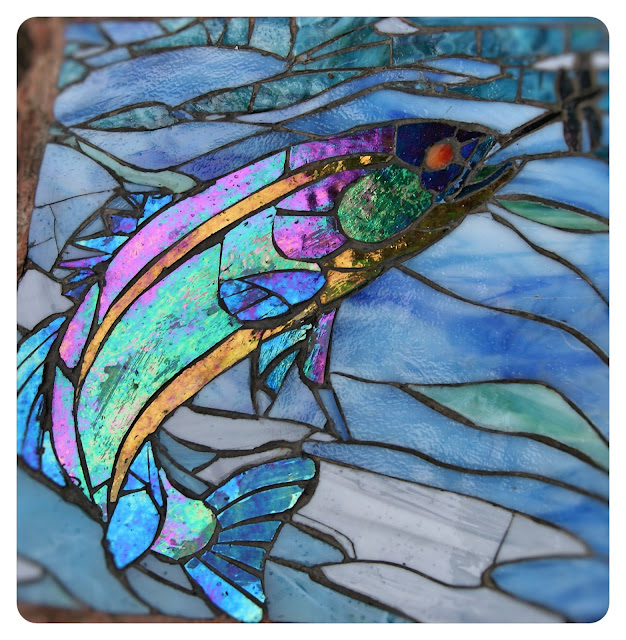 Wave
Last summer we went feral on a sandy slip of an island - North Uist.  The evening sunsets were heartbreakingly beautiful especially when coupled with the frothy sea. Most evenings the tide had been out, however over the week the tide times changed and by our last evening there and with the assistance of a brisk onshore breeze, the waves were foamy and bubbly. The sound as the bubbles burst and frothed on the beach sounded raw and primeval and oh so delicious.I left a sizable chunk of my heart there. 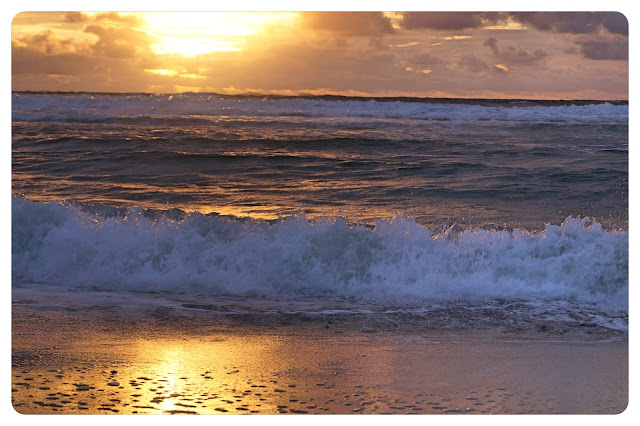 Long
My 'Margaret Dashwood' heartwarmer shawl - well, to be precise - slightly over half of the shawl. I love it. Youngest 'styled' this photo, providing the wooden stump for me to stand on, he then made me hold out my shawl as he draped it across the floor in front of me. A Lord Lichfield in the making? 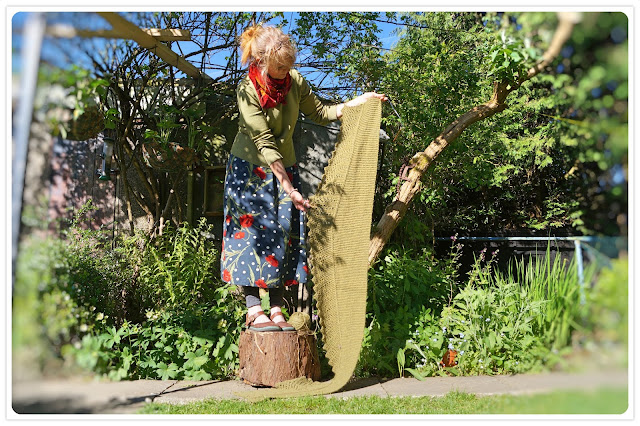 Green
On the Sunday afternoon after my folks had gone home from our birthday picnic in the garden. The sun was low enough to shine obliquely through leaves. I stood beneath them and watched the insects pootle about. There is something special at this time of year - the greens are so verdant, so vibrant, so full of promise and vigour. These are from my hanging basket strawberries and the small insect creating the silhouette is probably a 'Frit Fly' sunning itself in the last of the evening rays. 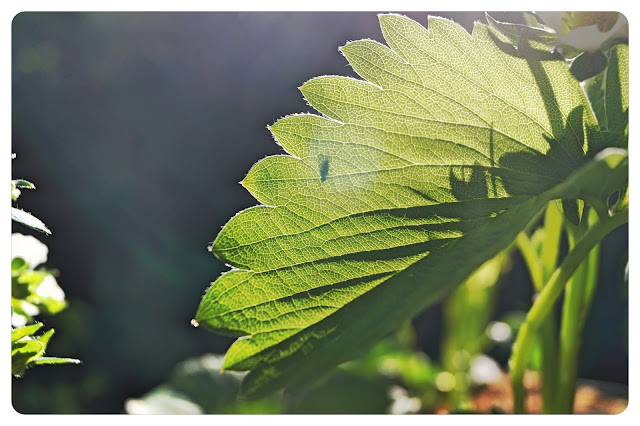 Chocolate cupcake
Not exactly a cupcake - but oh so chocolatey! Not far from the village is a small but wonderful nature reserve. Used by dog walkers, children, hikers, families and us. Moss loves it, there are spaces to run, rivers to swim in, fields to play and paths to follow, woods to explore and for us - a rather good and simple cafe. They are dog friendly, positively encouraging walkers and allowing dogs into the cafe.

And then, then there are cakes.... oh the cakes.
Eldest, Himself and I sat in the sun, Moss asleep on the grass beside us. We had large mugs of tea and Eldest had hot chocolate adorned with a huge froth of cream ....then there was cake.... oooh nom nom. 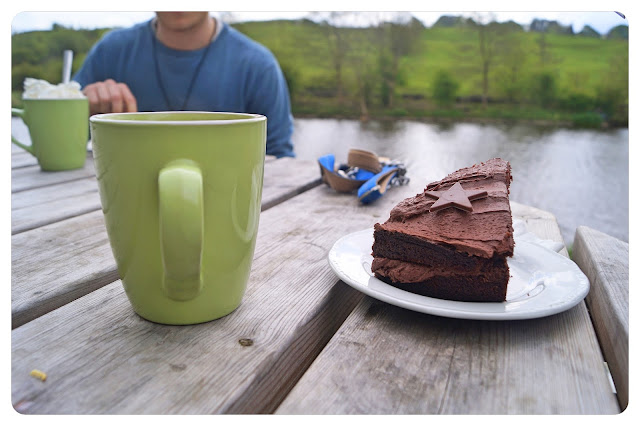