Let the music do the talking

On Sunday I had gone to the Harrogate British Wool Weekend helping on the Rare Breeds Trust stall. Well, I say helping, once I'd helped walk in (be dragged by) the 8 rare breeds sheep, all I really did was knit Himself's final sleeve (yessssss FINAL sleeve!!) and chat about the North Ronaldsay wool I was using to any one willing to listen.

For some of the time I wandered around chatting with stall holders, one of which was the Jamieson & Smith stall. I'd originally found out about this company when reading Kate Davies' blog - Needled. So I went over and chatted about their wools (gorgeous) about Kate herself (they adore her too!) and about needle felting (still not something I fancy - looks a bit too like self mutilation with the rather vicious looking tools!)

Any hoo - Jamieson & Smith buy their wool from Shetland crofters and farmers which helps support not only them but also the rare sheep that supplies the fleece.  They were such lovely folk, happy to chat and not try and push you into purchasing anything. They were more interested in 'selling' information and encouraging crafting - my kind of 'hard sell' :) 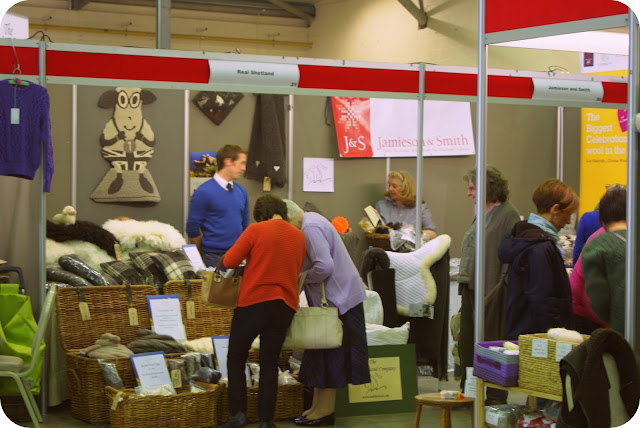 The Rare Breeds stall was diagonally opposite the 'Sheep Roadshow' stand, which for most of the day was quiet but would sporadically erupt into a noisy demo. A loud fanfare followed by music would alert visitors that a demonstration was about to start. A loud and cheerful farmery type came out and his patter would be relayed through over-loud reverberating speakers.....it went something like this.....

Tra la la (the final count down music) la la doo dit doo doo, trall a a a .....blah blah blah whoomwa hummmummubblah blah ha ha ha ha ha!
Then a large ram would come out to more fanfare followed by applause then the shearer boomed happily away explaining in a loud but completely unintelligible waffle about this particular animal. This continued until four rams were in place and then he would get a 5th animal - a female and chat away as he demonstrated shearing.

The rams, so used to all this activity, would just ignore this and cud away until it was their turn to shine.  Each ram then had a trick that it performed to music. One nodded his head in time with the beat, another would paw in time with the music, a third swayed from side to side and lifted each front leg and the final would do a sort of 'moon walk' - all to much applause and appreciation. On the second demonstration an hour later, I watched the shearer rather than the sheep and he was guiding their actions by either swinging a bucket of sheep nuts or by tapping his own feet then rewarding the animal with a treat. Clever. 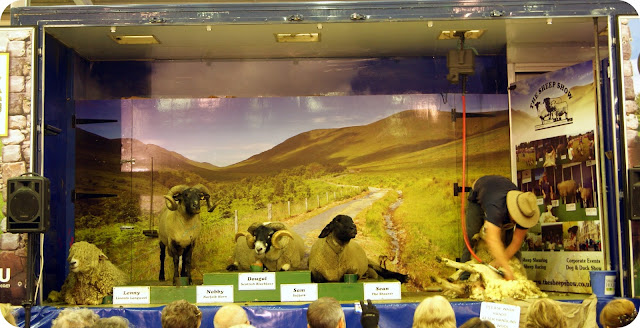 Yes, these really are real sheep -
From L - R: Lying down - Lincoln Longwool (he nodded his head to the music), Norfolk Horn (he swayed and tapped), Scottish Blackface (he 'counted' with his feet) and the Suffolk who did the moon walk and finally Sean the Shearer! 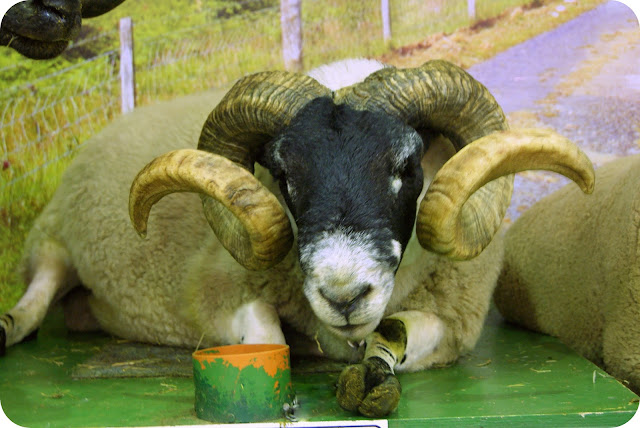 The Scottish Blackface was so laid back - I just had to photo him!

More woolly happenings will follow, once again, it is late and I am off to bed!