Storm Bella wore herself out by late afternoon - the screaming winds calmed down to a whisper and the sleet, hail and rain softened to the lightest feathery flakes of snow. Bella - who'd been screeching like a banshee all day had quietened and mellowed and was suddenly contrite. 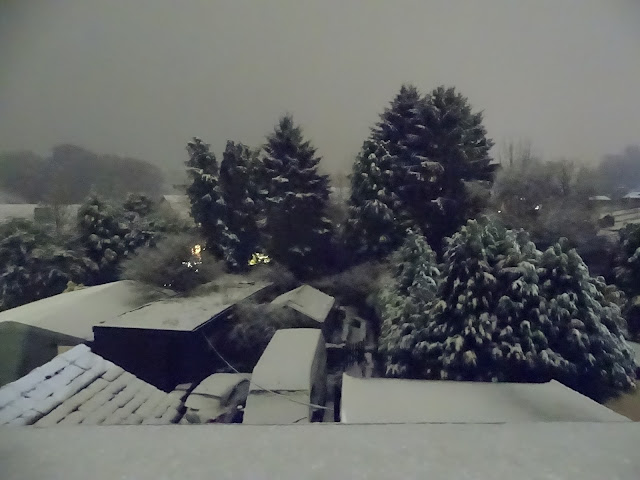 I took a photo from the attic window at the muted view and the strangely glowing grey sky. As I went back down stairs, I desperately wanted to get out of the house where we'd been holed up in all day and walk in the snow. Himself agreed as did Youngest and of course Moss would always be up for an adventure. So I finished preparing the evening meal which we soon scoffed, then wrapped ourselves up warmly.

Fancy coming along with us? Good - grab yourself a brew, make sure you are warm and here we go! 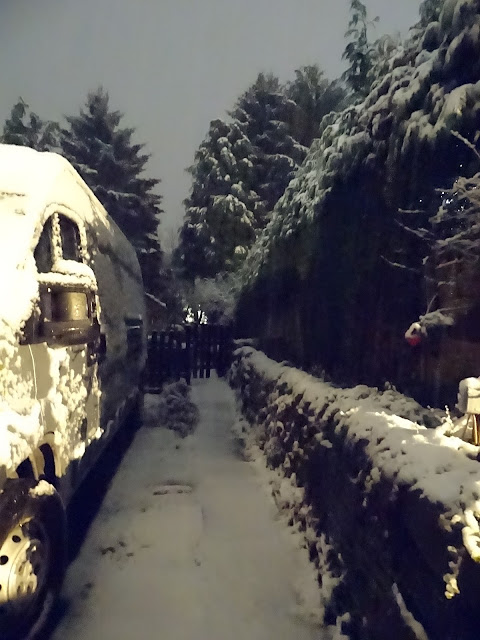 As we stepped out of our house, a neighbour returned home filled with stories of how he'd struggled to get back to the village 'over the moss' - a high moorland road. We listened and sympathised and nodded as the snow flakes - some as big as saucers floated down and started to coat us. Moss - ever ready for a walk - was impatient and pulled on her lead. We gave our excuses and set off through the soft wet snow - ankle deep in some places and slippery in others. 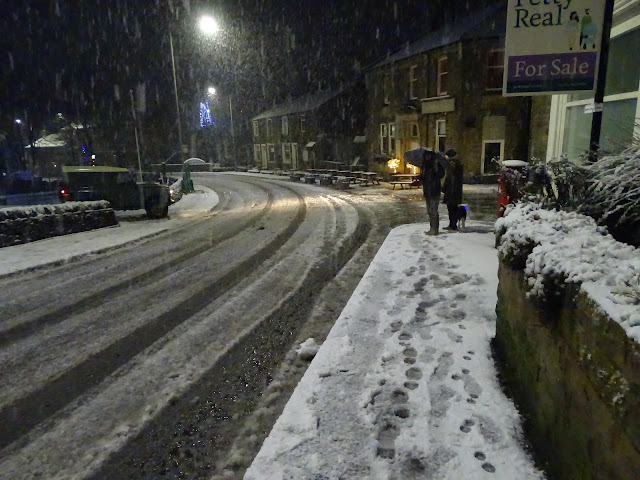 The roads were quiet bar one or two cars carefully returning home, gliding past slowly. We - Himself and I - had umbrellas and it was so quiet you could hear the flakes landing on the umbrella in a light little tick tick tick noise. Youngest - preferring a fleecy wool hat and heavy over coat was getting as white as Moss while they waited for me to take photos. 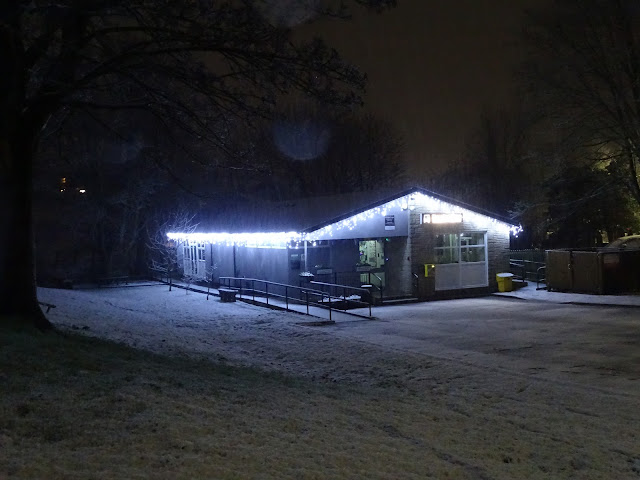 Our route took us past the community centre, resplendent in it's new festive lights - eerily glowing in the silvery gloom, the village tree which, not so long ago I derided at it's poorly lit decorations, now glowed magically through the snow covered branches. 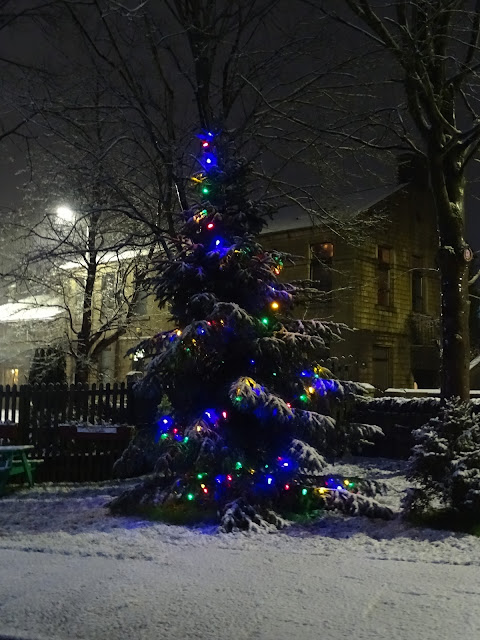 The village pub - closed due to the restrictions - looked oddly cheerful despite being shut, the little trees at the front door twinkling in a warm gold light in stark contrast to the wintery silvers, greys and white hues the village had taken on. 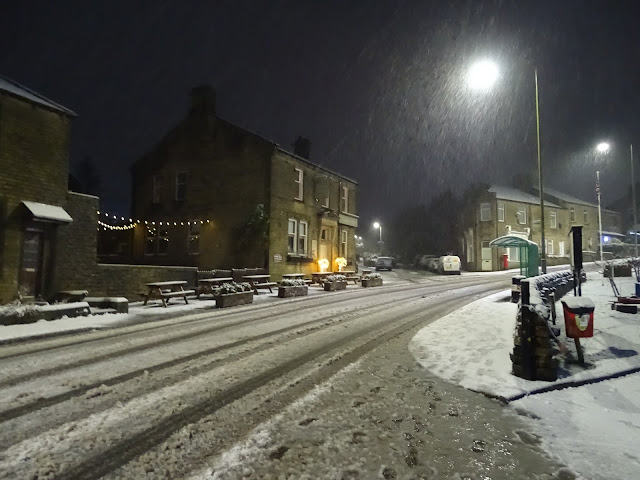 My booted feet made the most deliciously sloppy slap slap scrunch noise through the wet snow - not the usual satisfying crunch of crisp snow - more your slushy mushy splosh sound. It amused me greatly. 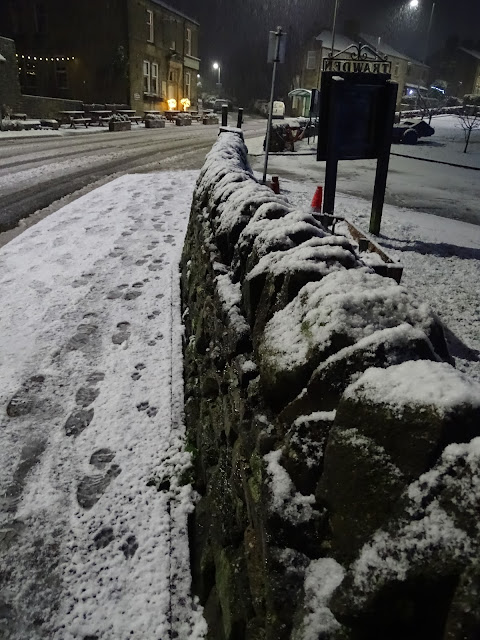 Further along the main street through the village,  more golden lights glowing through snow covered branches. 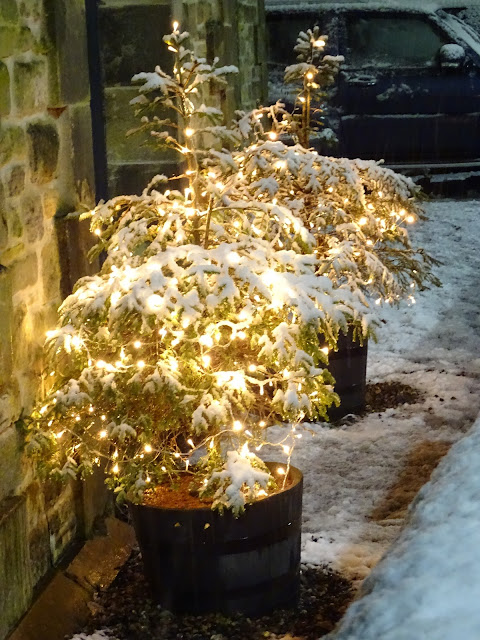 It seemed at first we might have been the only ones venturing out, but as we continued more villagers appeared, enjoying the relief of being able to get out. Children were attempting to shovel snow to make a snowman but it looked to be a lost cause, the snow although quite plentiful where they were playing, was too soft and too wet to hold any shape. 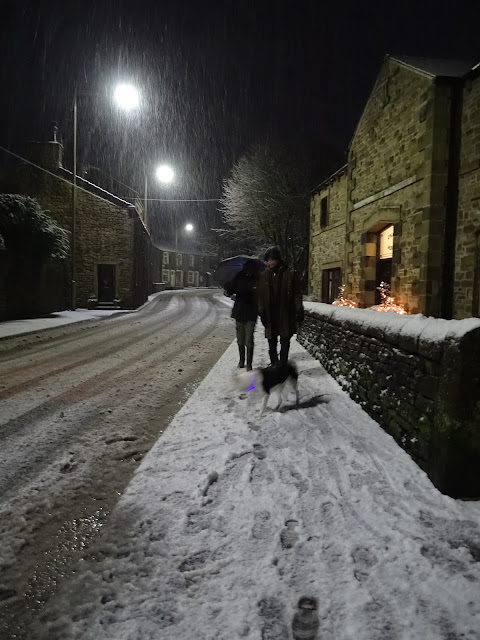 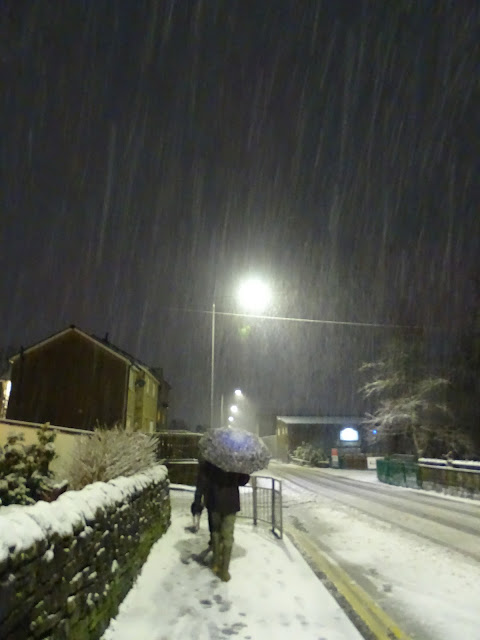 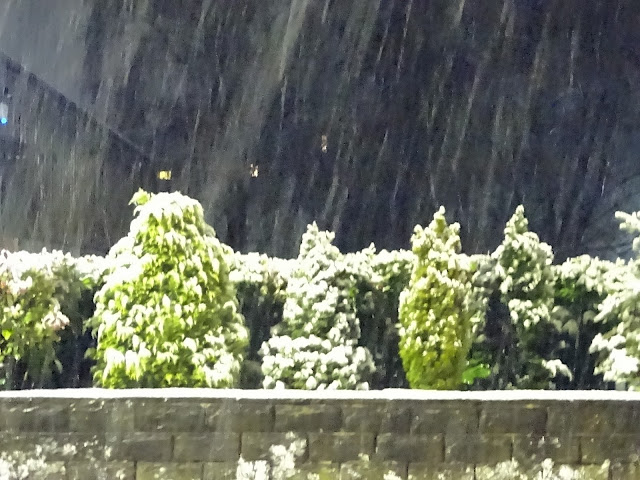 Festive lights, although twinkly and cheerful during the darker nightstook on a whole new atmospheric glow, filling the air with blurred radiance and smudged luminosity. 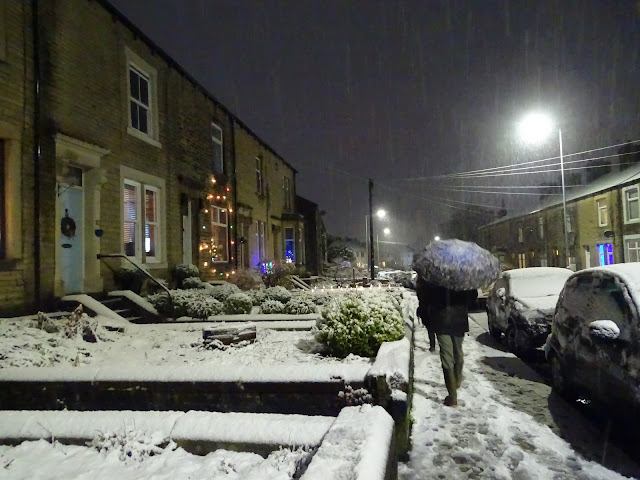 We turned off the main road on to a smaller road with less street lights, making the snow more enchanting. 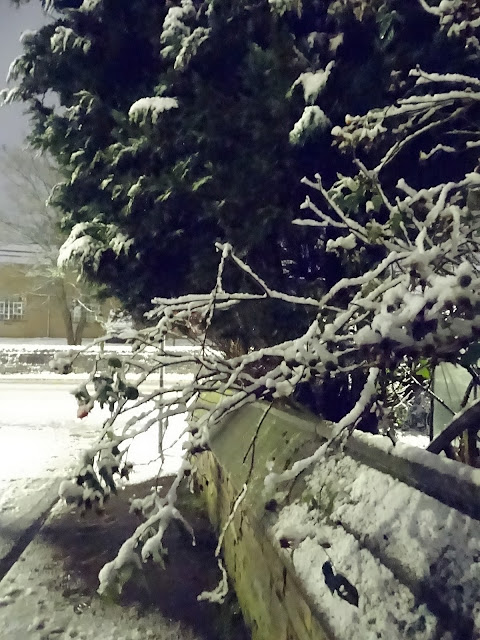 The trees and branches were plastered in piles of white foamy flurries and the lane turned into a track with slush filled puddles. Moss was in her element. This dog finds pleasure and fun in what ever walk she does. 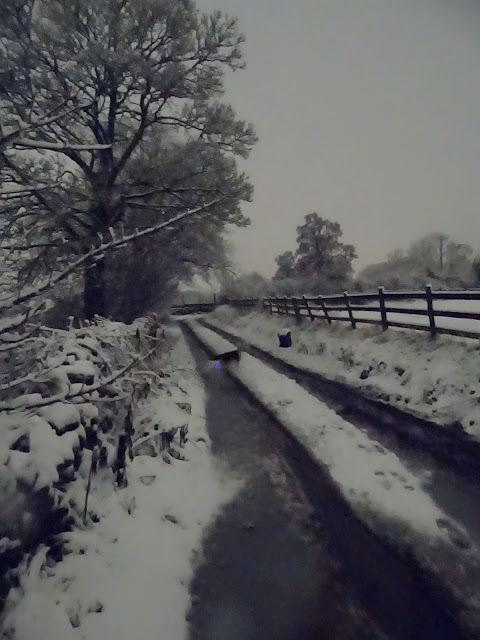 Our lane became darker and more secretive - more special, more magical. I could hear snow fall off the trees and slump on to the ground below. I could hear water creaking beneath our feet and the occasional bird chirp. 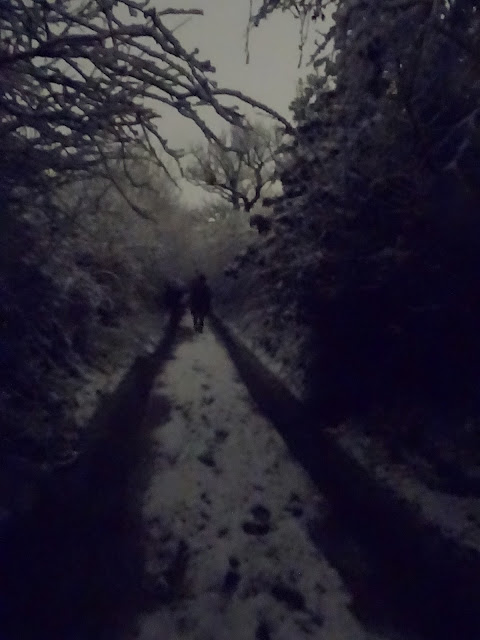 The village lights were glowed faintly through the silvery gloom, a distant dog barked and we could just make out the sounds of children's excited laughter. 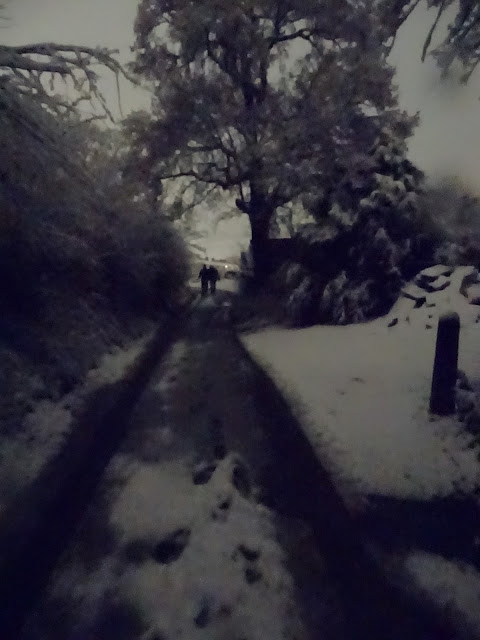 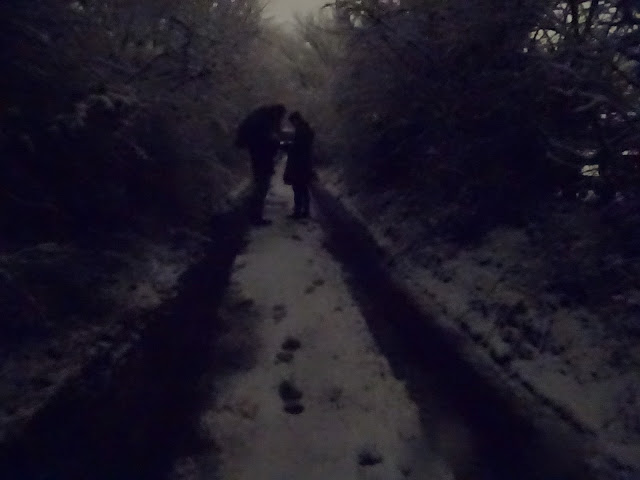 At the end of the lane we re-emerged back into the top of the village, houses were once again lit up and glowing, street lights reflecting brightly off the snowy street. 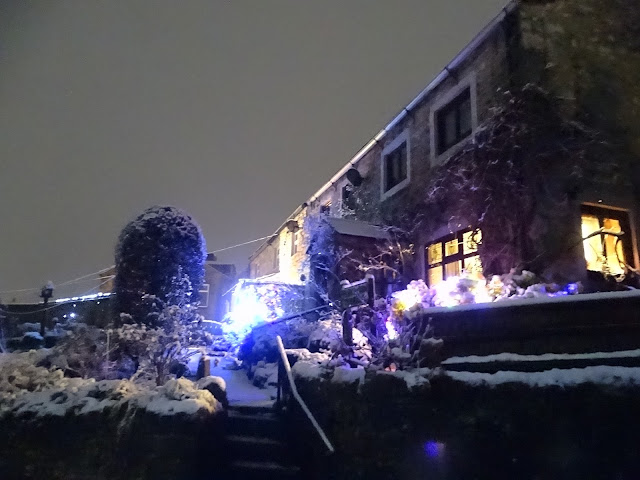 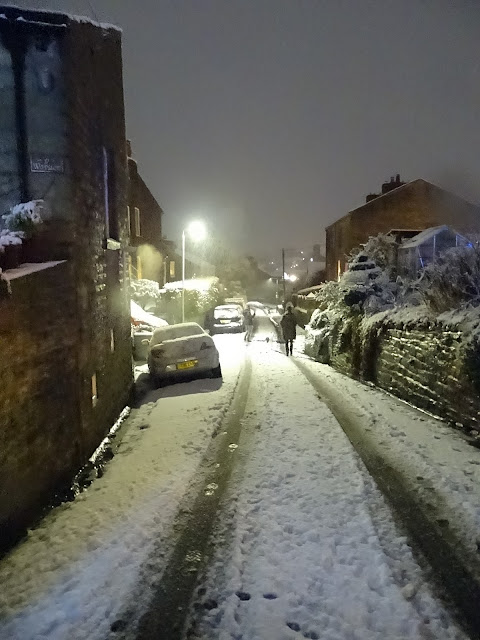 We headed for home, down a simple path, one we used for years to and from the junior school - pausing at a bench coated in white fluffy snow. 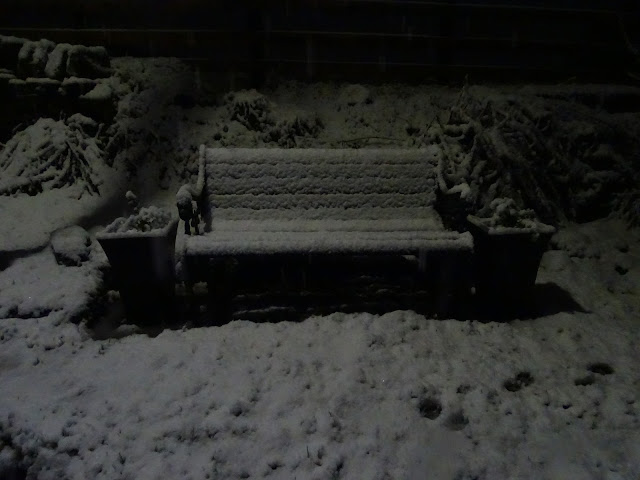 Then home. Moss was ruffled dry and sent to lie down by the fire, we shrugged off dripping coats and stepped out of wet boots. Time to put the kettle on and finish off the last mince pies and look at the photos.

We all felt a lot better for being out, our normal walks had been curtailed due to the weather and commitments and this evening walk certainly made a whole lot of difference :) and it was wonderful!