Excuse me mate - you ok?

Work has been its usual busy self - the phones trilled themselves off the hook on Tuesday and we were exhausted by the end of the day - the silly thing is - although we were tired it was a good  tired!

So, once home, after eating and a spell of kitten entertaining, I thought I would share some photos from a walk we have done recently.

Last Saturday was an AbsOlutelY gorgeous day and we collected our boots, the dog and a friend and head for the hills. Having parked on the side of a quiet country track we yomped up a huge grassy sheep filled field and having crested the brow, Youngest announced his need for lunch. We found ourselves a lime stone outcrop to stop at and we were surrounded by the most beautiful deep blue sky. 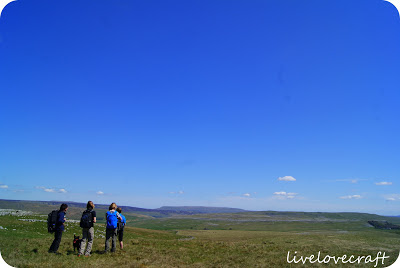 Having sated Youngest's (and our) appetites we followed an old bridle way over the hills. I love the names of the tracks and farms and often wonder where their names originate. Cowperthwaite, Tennant Gill, Bull and Cave, High Birk Knot. Some names I have investigated and have found some wonderful and convoluted derivations. 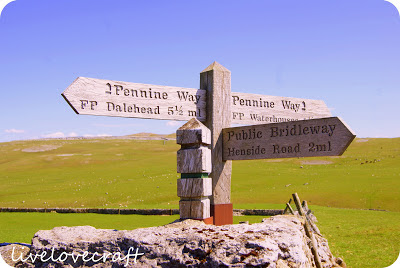 But I digress, back to our walk. As we came around a corner, we spied something orangey coloured ahead of us alongside the footpath. As we got closer I felt as if a bucket of cold water was thrown at me as alongside the orange emergency bivouac bag was a man's body lain in the recovery position. With my heart pounding I looked at Himself who also looked rather concerned. The three boys had retreated to a safe distance as we approached carefully. His haversack contents were spilled out all around him and his head and hands were blistering red from the sun. I noticed with a certain amount of morbid horror a single fly sunning itself on one of his hands.


'Excuse me mate' Himself said.
You ok?

I leant over him, his colour, apart from sun burnt red, was not of a dead person and I could see beads of sweat across his shaven head. I touched him as I asked him if he was ok.
Nothing.
I gave him a slightly harder prod and hoped that my cell phone would have signal in this isolated spot.
His eyelids flickered and his 'fly' hand lifted and vaguely waved.

'Yeah, yeah - I'm ok, ok' His eyes barely opened and he put his hand down and mumbled...'Just resting'.

I stepped back, as did Himself - neither of us sure what to do next, then the body mumbled again..Just resting'.
We resumed our walk on the path confused and relieved at the same time. The boys returned back to us, chattering nervously at the thought of finding this man on the floor, they too had been afraid of the worst.
I looked back, he was still lying down with all his belongings strewn around him.

About 50 - 60 meters along we met a group of three walkers and decided to prevent them going through the same confusion and alarm as we had just experienced and mentioned to them about the prone figure just ahead.

Aye, wi saw im an asked im if he were ok an he said he waz asleep leik, wi thowt t worst, ye knaa wat ah mean leik' said one man in a Geordie accent, it turns out they too had prodded him and expected the worst.

We chatted a few minutes more with the Geordie lads then continued on our walk.

After a while Youngest proclaimed once again, his need for a cup of tea and a biscuit....so once more a pit stop was the order of the day. Once more a beautiful spot was found. 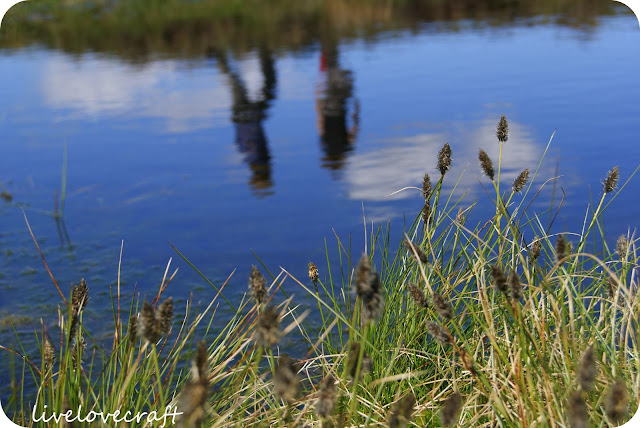 We sat alongside a small tarn and listened to the skylarks. The boys, much recovered post cups of reviving tea, explored and I just had to get out my knitting (which has reached a problem that I can not solve easily - need the combined knitting know-how of the knit and natter ladies on Thursday). 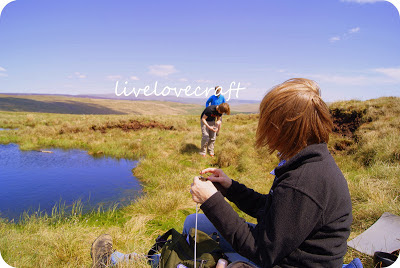 Despite the glorious sunshine, high up on the fells, a nippy breeze drove me back inside my fleece.

Much refreshed, we continued up on to Fountains Fell , so called as it used to be part of the Fountains Abbey estates in the 13th century. There is a lot of evidence of more recent mining activity on the tops from the late 1700s to the mid 1800s including mine shafts with large  SNOW lumps at the bottom. I managed to get a photo by holding my camera out over the shaft. 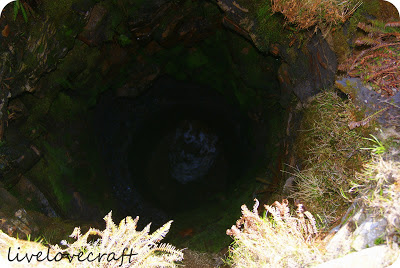 We explored the top, taking photos, finding interesting artefacts when suddenly ..... we saw 'our' body-on-the-floor-man, only this time he was walking around (with half a very burnt face...) phew. 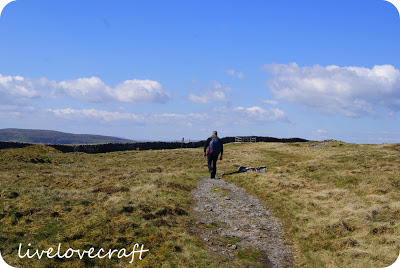 It was (on the whole) a lovely day out - just could have done without our moment of alarm! 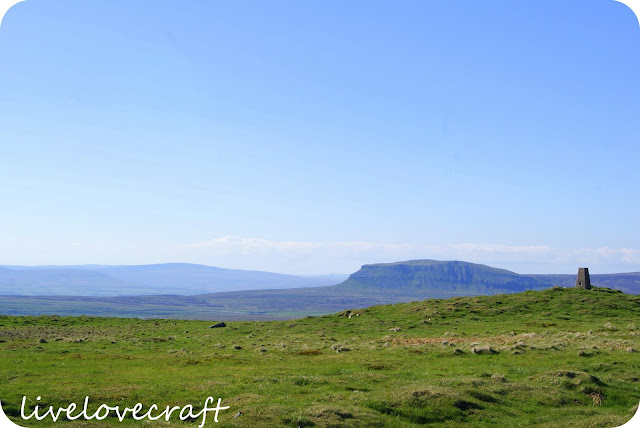 And you?
Did you get out in the sun shine?
Did you find something that was out of the ordinary?

What ever you got up to - hope you managed to out and about :)

Email ThisBlogThis!Share to TwitterShare to FacebookShare to Pinterest
Labels: Himself, random, snow, walking