Thank you so much for your very kind comments about my sheep-cake. It was very well received and there was much laughter and offers of putting the kettle on as soon as we started work! 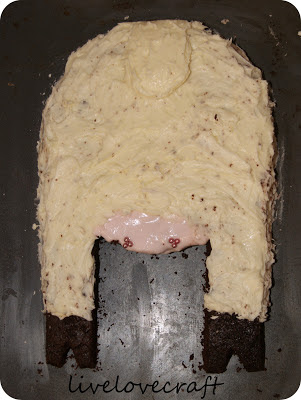 There was just the two cakes in the end for this year's end of lambing season cake-off,  as a third entry had a mini-family-crisis (a poorly coughing child) so cake decorating was put on hold - the vet (a huge rugby playing cow lifting strapping man) had made an extremely rich and tasty chocolate and Guinness cake!

He covered it with lashing of a cream cheese icing and I have to admit it was very yummy but very rich, not something you should have mid-morning at work - I did cheerfully comment on 'I don't usually drink during the day hic!'

We all chortled at his reasoning for his design...he said that he'd been looking at the back end of ewes for the last few weeks so it was the perfect choice for his cake!


Oooh ooh I just remembered I have heard some new farming dialect words - you were so interested last time I blogged 'Today' that I thought I would share!


A farmer rang to request a list of drugs and one of the medications he needed was ' fer 'is yow wi bad touch of t crambleys'  And not only was she suffering the interestingly fruity sounding 'crambleys' but she was 'alles had tiftin' too....

Email ThisBlogThis!Share to TwitterShare to FacebookShare to Pinterest
Labels: baking, thank you, work