Belinda from Mad Englishwoman and Dog asked for a reminder how to make paper snowflakes and while I was knitting and sipping coffee, I hatched a plan to do a quick tutorial once I'd cast off from the sleeve I had nearly finished.
Here goes!
* the usual T&Cs - be careful with sharp pointy things etc 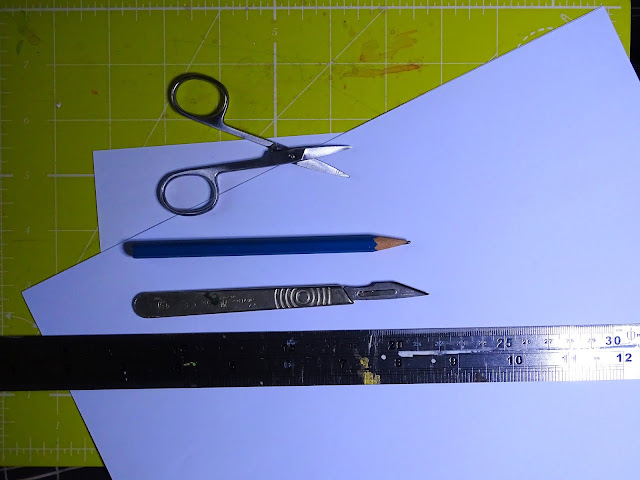 To make six sided star or flake, you will need to make your A4 paper into a perfect square.
Fold a top corner across until the edge is perfectly lined up with the diagonally opposite edge
and flatten the fold firmly down. 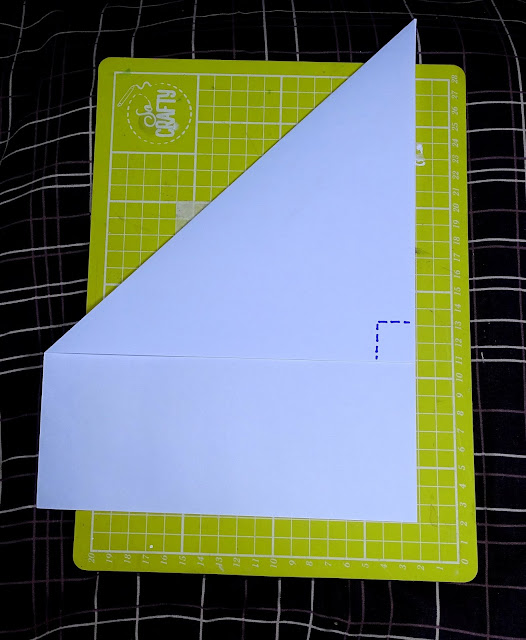 Draw lightly (I've used a marker pen to make sure is visible) where the lower edge of the square is above the excess paper. 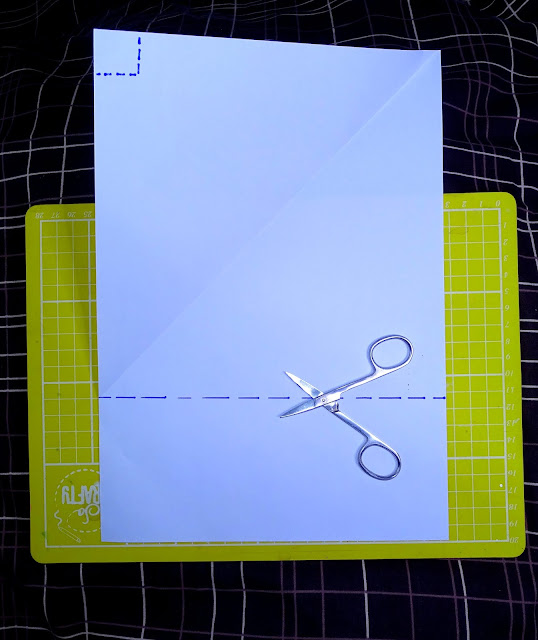 Cut off the surplus paper and save it for later. 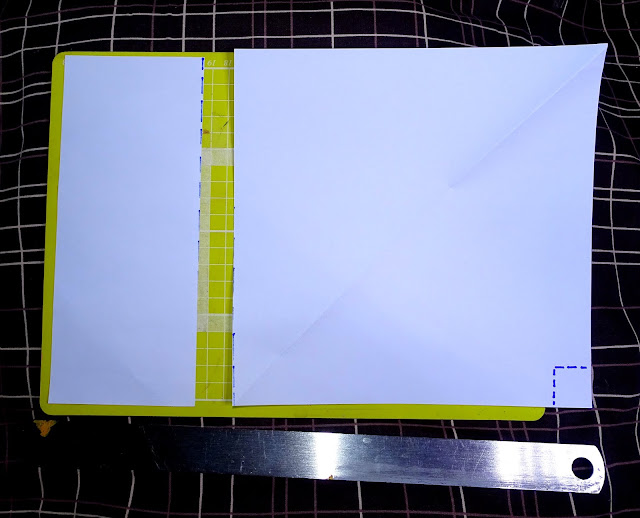 Refold your square back into a triangle,
then fold again into quarters. 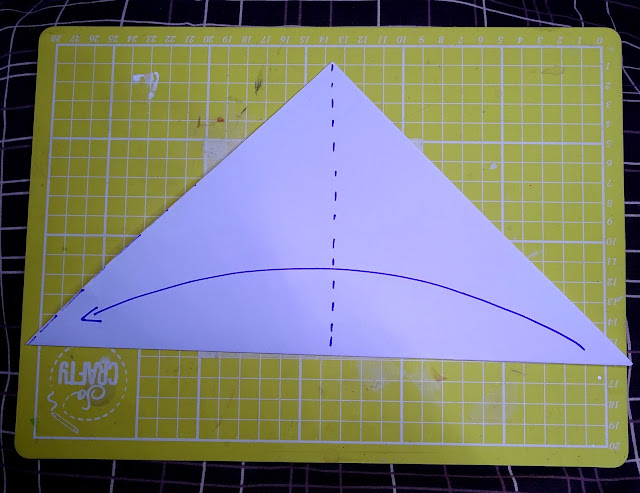 Once again, firm down the fold to make a sharp crease. 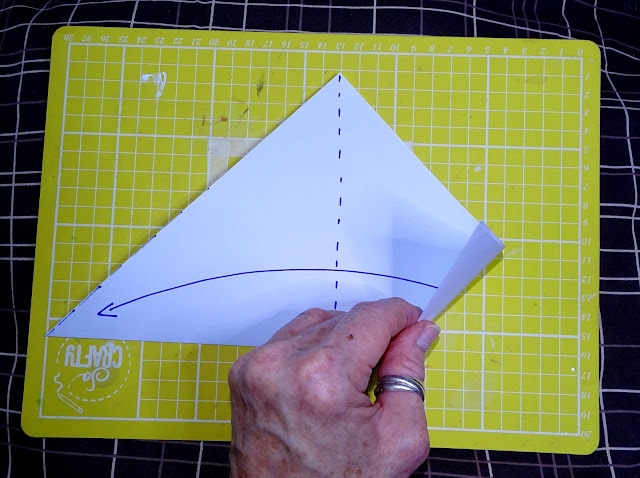 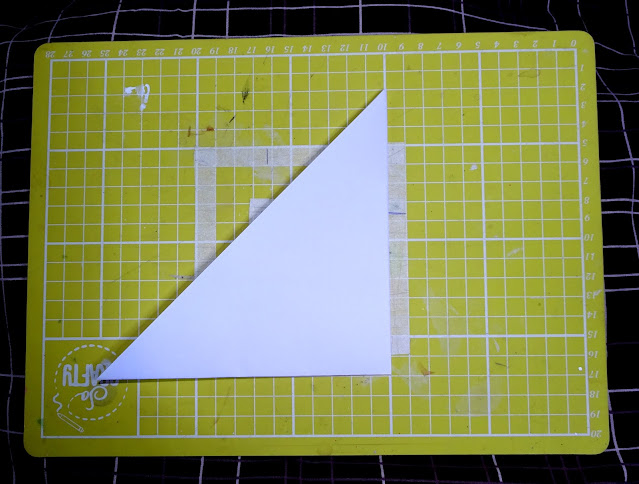 Now here comes (in my opinion) the fiddliest part of the process.
Turn your folded paper point down (the 90° corner)
you need to fold the triangle into three from this point.
I found the best way was to crease the very tip of the bottom point with my finger nail
to help the paper bend at this point. 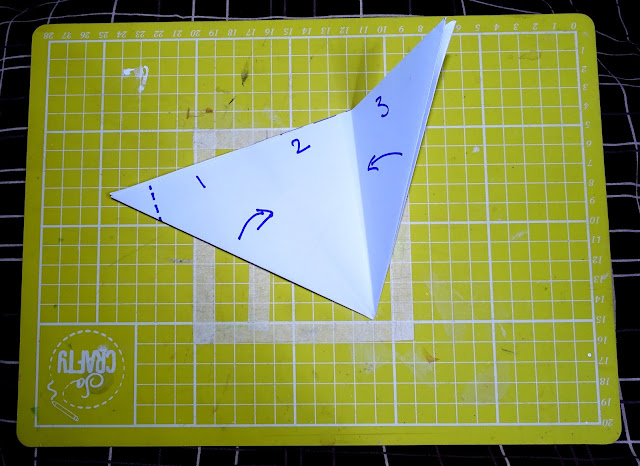 Then curl the paper as if making a cone.
Once it appears that the cone is equally curled to create three sections,
flatten it, again making sure all sections are equally folded
and the folds pressed down as firmly as possible. 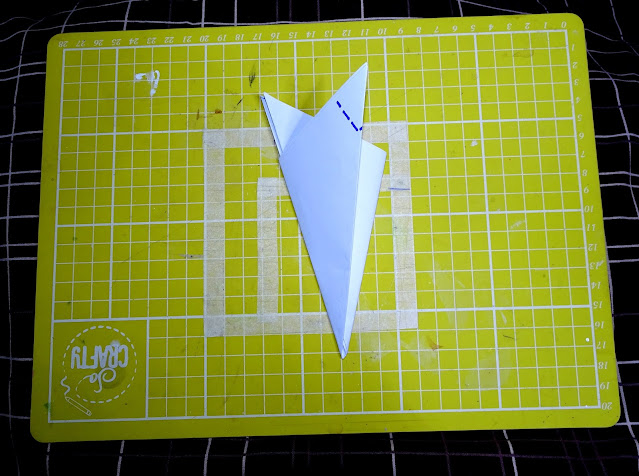 Turn your now flattened cone until the two upward pointed corners are at the back
and the flat edge is facing you. You need to cut off the pointed corners to match that edge. 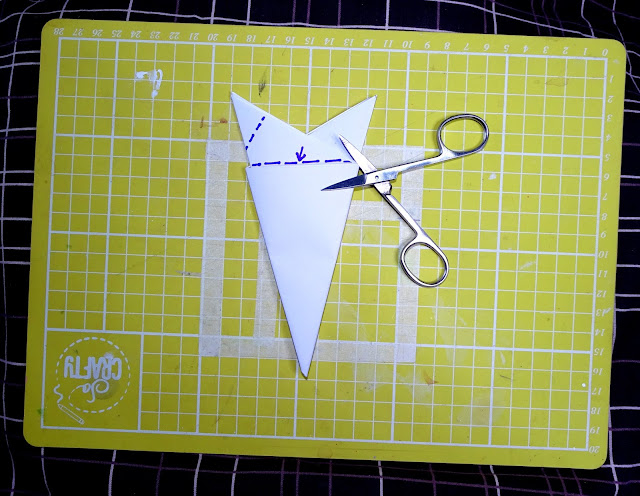 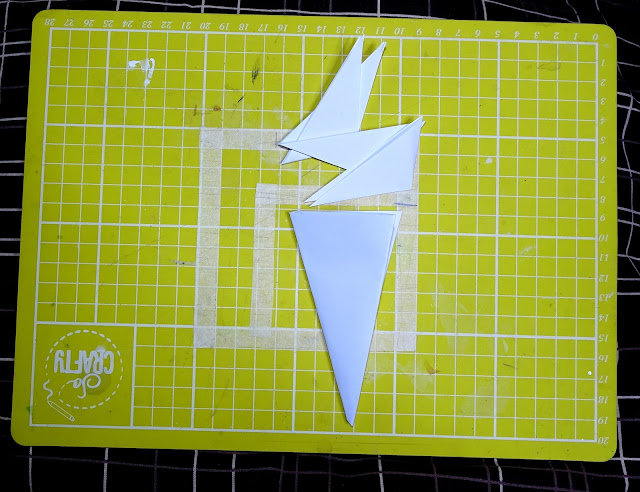 Now the fun part,
turn your triangle sideways so that the single fold is along the base
and the double folds are at the top. 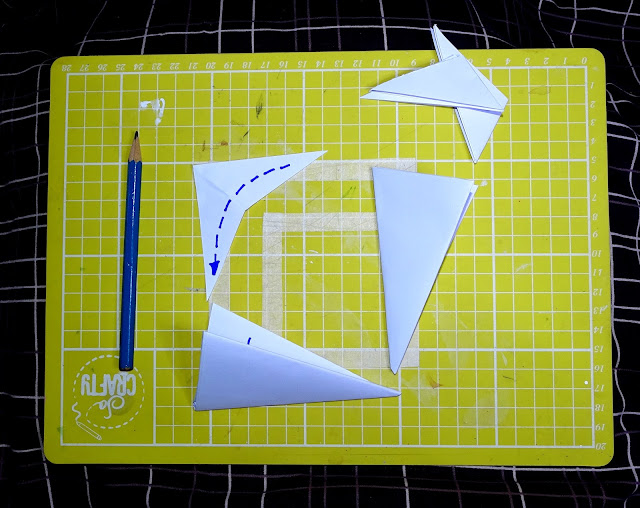 Grab your pencil and sketch out a profile - you don't need to colour in the sections to be removed,
I did at first and it made it easier to plan,
I have done it here to make it show more clearly.
Cut away the 'negative space' leaving your flake. 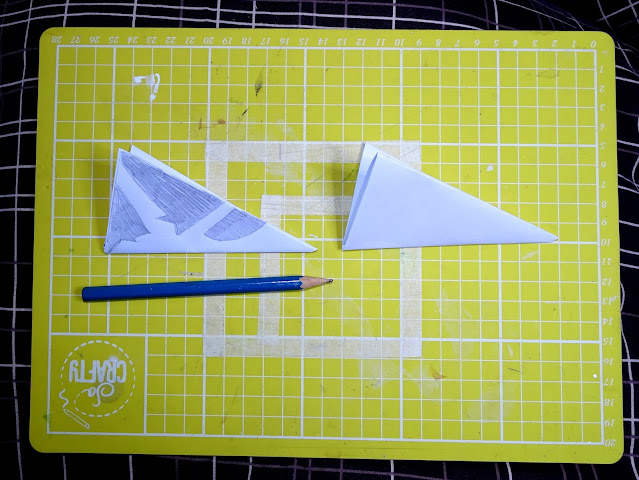 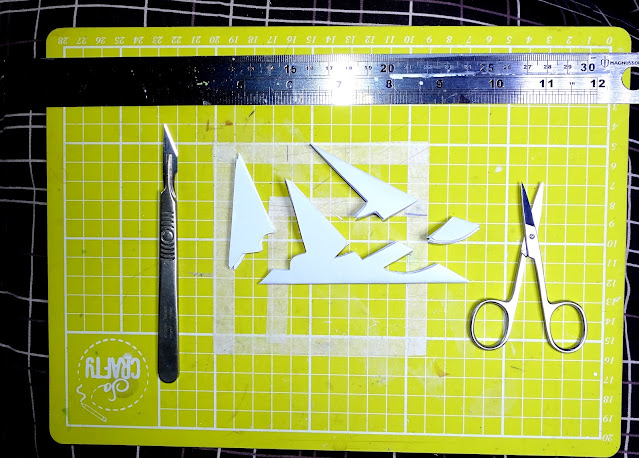 Which when opened will reveal your pattern! Voila! 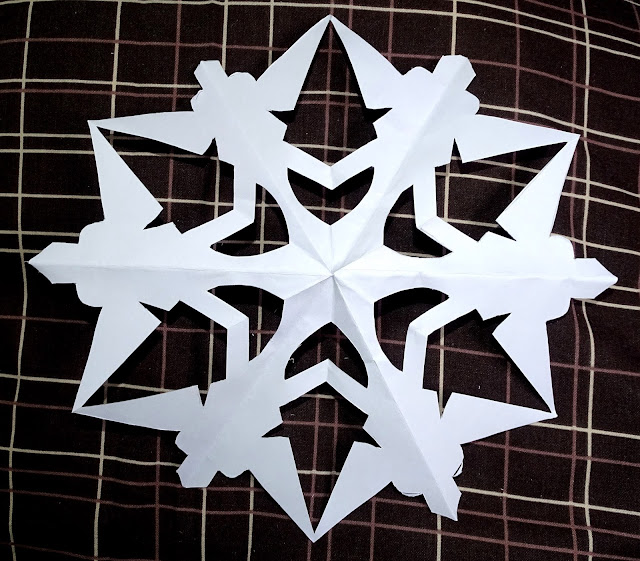 You can go as complicated or as simple as you fancy - this one is a pretty simple shape,
some I made became so intricate that I had to resort to refilling my coffee mug and falling upon a ginger and lemon shortbread to give me strength!
Oh yes ... remember that discarded and stashed for later piece of paper?
Well, just fold in half lengthways, then, as before, fold over the top corner to make a square. 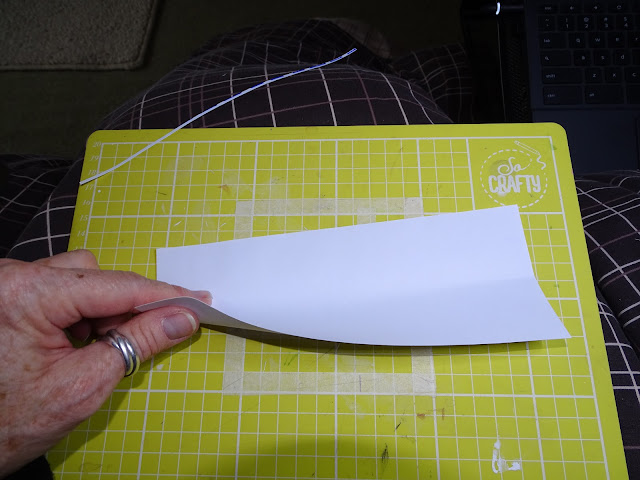 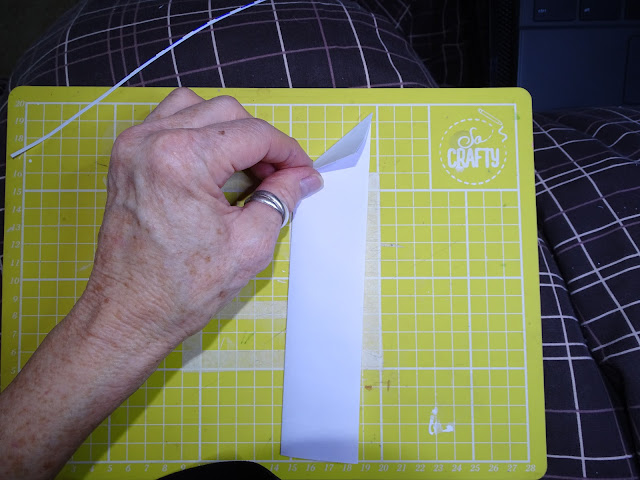 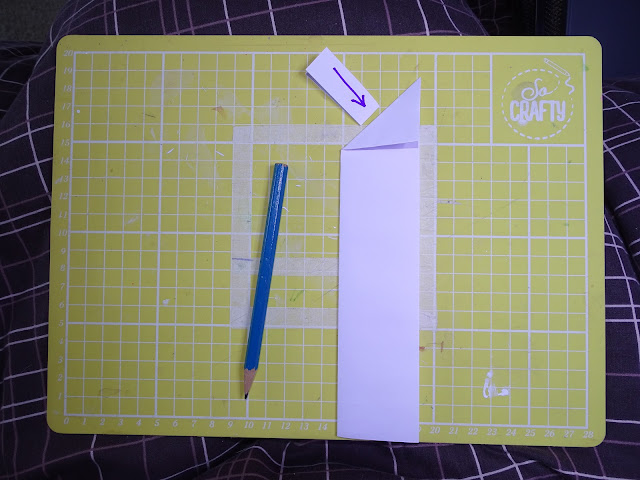 I just free cut with the scalpel blade - which is always a little risky as I can never predict the design - as it just 'happens' . 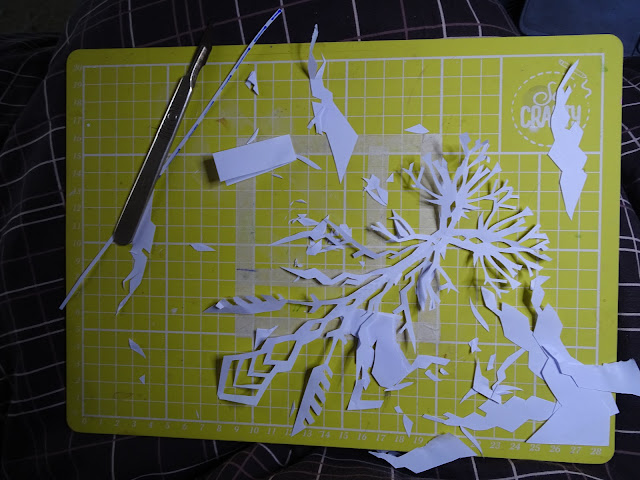 So, there you have it - this snow flake is less winter-wonderland and more snow sprite - perfect :D 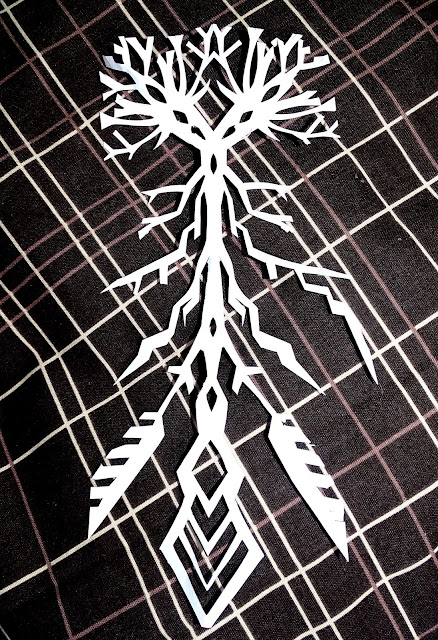 Hope this helps, and if you need further inspiration and certainly better instructions and more traditional finished snowflakes - have a look HERE and HERE and HERE!
Oh well, now to start the second sleeve, excuse my while I put the kettle on,
clear up the snow storm and cast on :)
at December 08, 2020