I started this before the sun came up, the sky was pewter and the snow covered rooves a soft pale grey. There had been a soft dusting of snow overnight and by the looks of it, it then froze into gravel hard pellets of glittery silvery white. And, although now that the sun is well and truly up - it is unseen as it hides behind the thick layer of pale grey-blue cloud drifting across the sky. Yesterday we walked up and over the moors to a favourite space of ours - locally known as Deerstones, it is a rocky outcrop facing the village with a bit of history.  It is near an old quarry which now has weathered into a protective space for grazing moorland beef or sheep. If you look hard enough you can find the old powder house, a natural cave beneath a large rock which has the remains of a concrete lining making the space as dry as possible for the explosives.

Local village knowledge talks of this powder house being a 'den of iniquity' during the days of the mills.  When the workers, having being paid on the Friday afternoon, traipsed up onto the moors and hid in there, where they'd gamble and drink all weekend only to return back down on the Monday morning worse for the wear, stumbling straight back into work. The stories go that the wives would have to go up as soon as they could and wrestle as much money as possible from their partners so they could pay the rent or buy food for the family. If they left it until the Monday evenings when their errant husbands would return home to eat and sleep - there would be very little if any money left over from the weekly wage.  Hard times ... 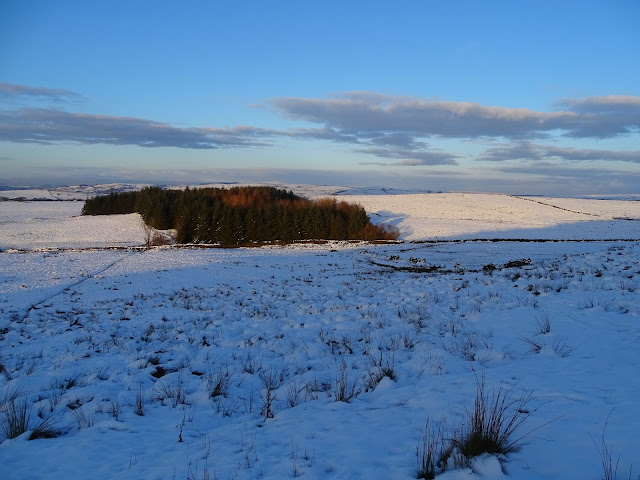 We often sit on the rocks above the powder house and let our eyes feast on the view - but yesterday was too bitter. The wind could slice through clothing with such an icy steel that we only briefly acknowledged our favourite stopping point with a cursory glance. 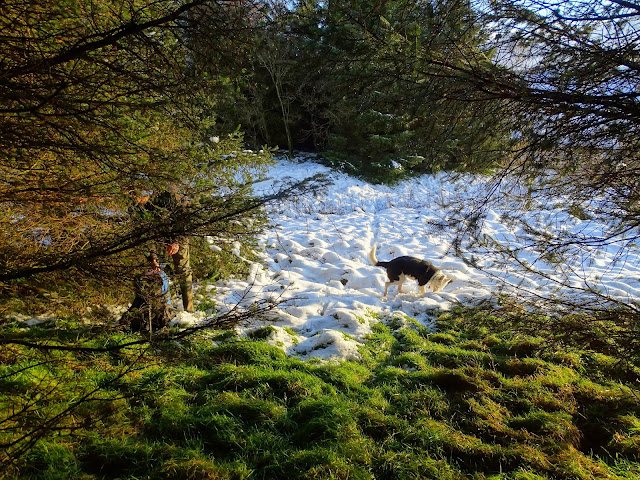 We'd stopped earlier, sheltering out of the cutting breeze in a wooded strip where the sun was a delight. Moss played and we drank tea as we listened to the drip of melting snow and the mewling of an unseen buzzard. 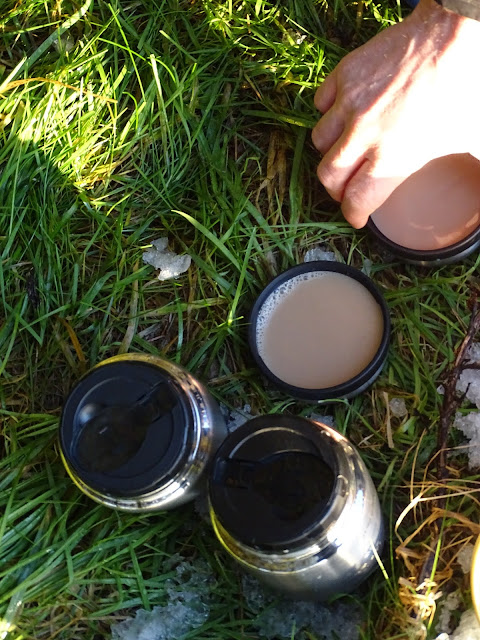 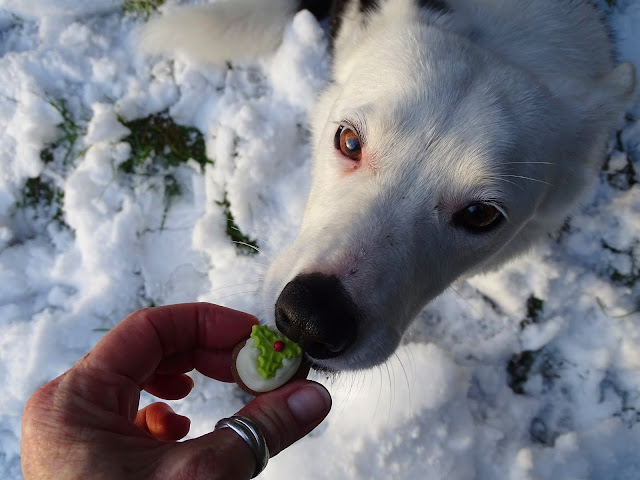 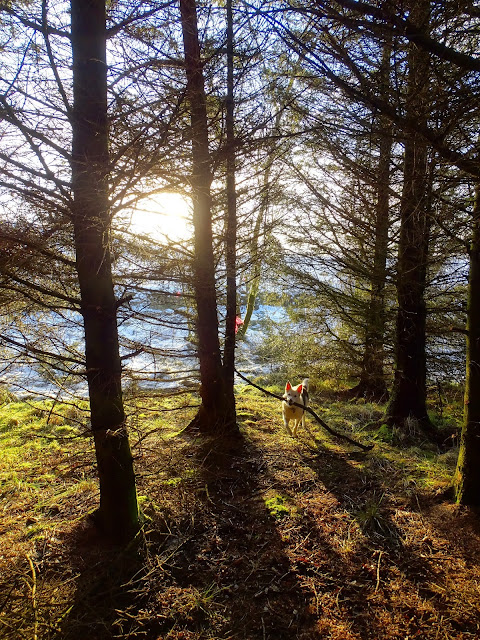 It was pleasantly (relatively) warm in the trees basking in the low sunlight - I could feel it on my cheeks and it felt wonderful.
As we packed away the flasks and dog treat remains, Moss collected herself a stick ..... she 'told' me that ... no stick left behind ... 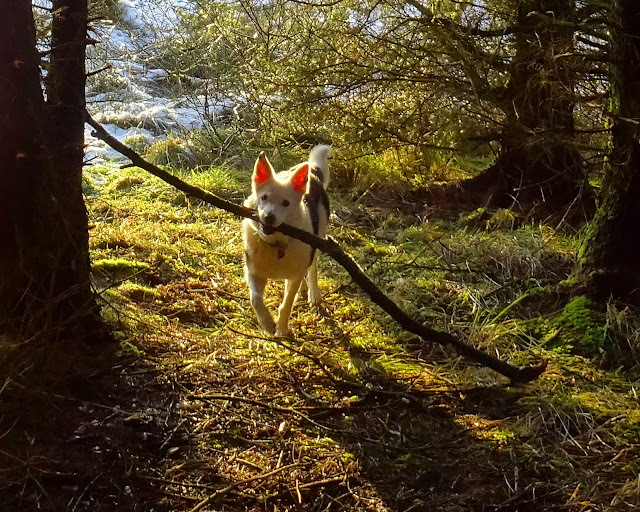 Leaving the shelter of the trees and stepping into the snow and wind was a sharp contrast to the benign sunlit mug of tea from a moment ago, but it did give the incentive not to hang around and to 'get on with it'! 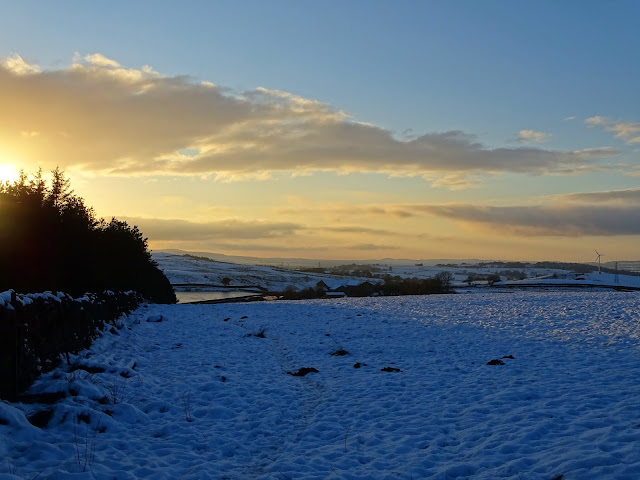 Up on the moors, the snow in places was nearly up to my knees and I was very grateful that I was wearing my welly-boots (a decision that I regretted a bit later though!) as we waded across the drifts. 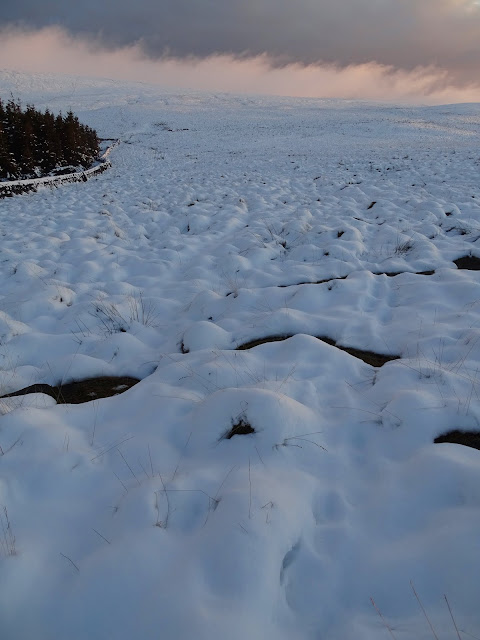 The sun slipped down below the clouds on the horizon, glowing and golden. Himself suggested we went up the moor road to the crest and capture the last moments of the light before we headed back down into the village. 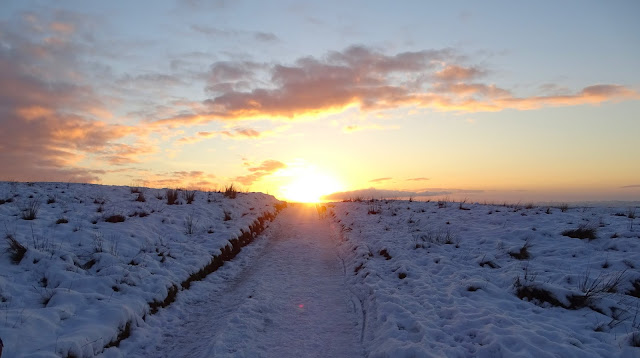 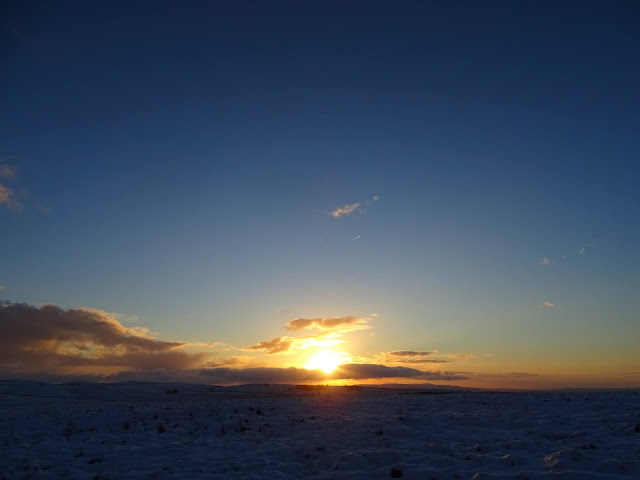 We only just caught the last of the rays as it disappeared and although the evenings have started to feel infinitesimally lighter, it was definitely time to go home.
The snow on the pathways then on the tracks nearer the village began to turn to ice making striding difficult and we began to tiptoe and shuffle carefully and despite the caution, I slipped and landed rather inelegantly ... I suspect I shall get a bruise on my left thigh as proof..... it was at this point I wished that I'd had my walking boots on rather than my wellies - hey ho, can't win them all! 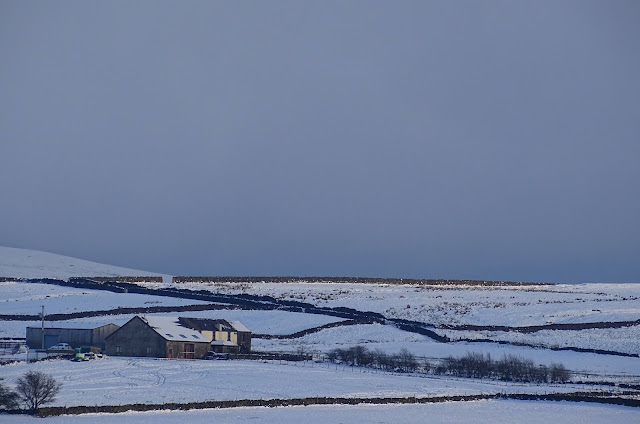 The final part of our walk, through the village, was accompanied by the remaining festive lights, the odd pumpkin, an ornamental witch draped in red fairy lights (!?!) and a few early evening dog walkers.  A good Sunday walk, time for a fresh mug of tea before I start cooking the evening meal.
I hope your Sunday was as good, that you got out as best you could despite the restrictions. I am so very lucky that we live in a village surrounded by the moors and it does not take too long to be out on the hills with only a dilly dog for company.
Have a good week and see you on the 8th with the first of January's words - gift/s, xxxx