A quiet, slow day - one made for curling up on the settee with a book. One for sipping mug-loads of hot tea and may be surreptitiously dunking a digestive or two. A day that might involve a bit of knitting, blogging and other wonderfully lazy-cat activities. 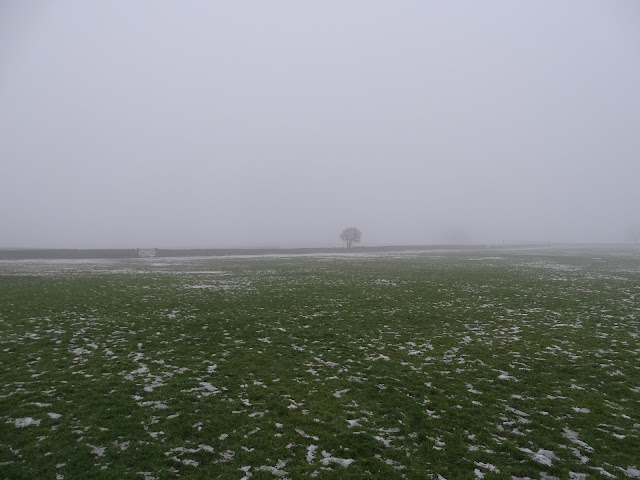 Or so I thought. I managed an hour or so of gentle nothingness and general sloth-alicious settee behaviour when Himself suddenly got up and, in his best rally the troops voice managed to peel the sloth (me) and her son (Youngest) off the settees and away from the fire. Moss, of course was in on this pressganging and bounced about like the dilly dog she is. 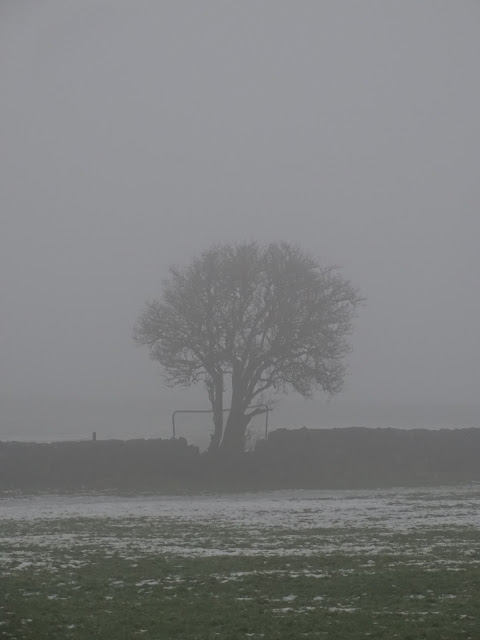 Wrapped up warmly we set off - I was not really in the mood for a walk, but knowing 'that it would be good for me' trudged along behind the other two. Well three really, Moss always out front 'scouting for sticks/rivers/mud puddles/slush and ice'. Himself and Youngest skated and slid rather joyfully along the icy patches while Moss joined in with happy circles. 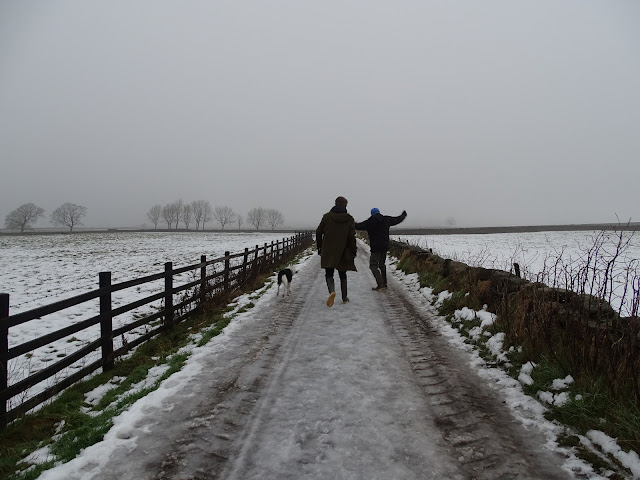 Despite the thick grey mist, there was a 'lightness' in the air. The fine misty rain constantly flickering on my face was more of a sensation than a drenching. The faint breeze swirled silently, barely perceivable until it found bare damp skin when it then became sharp and brittle. 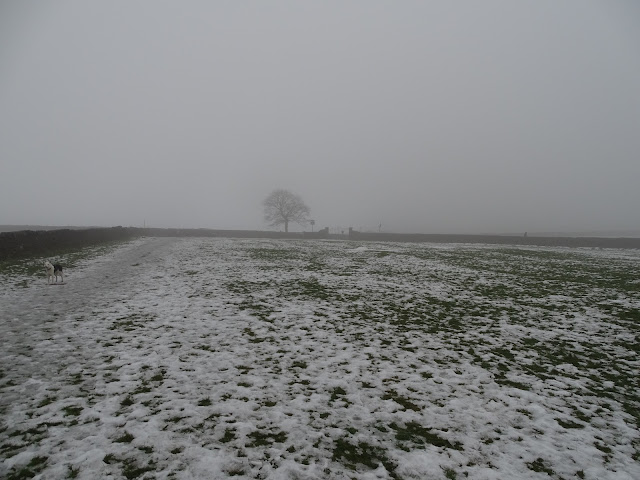 Distant trees faded in and out of view, large pale shapes in the subdued pewter grey sky. No bird song, no traffic, no dogs barking. Just our scrunching boots in sloppy, crunchy, muddy, icy snow. 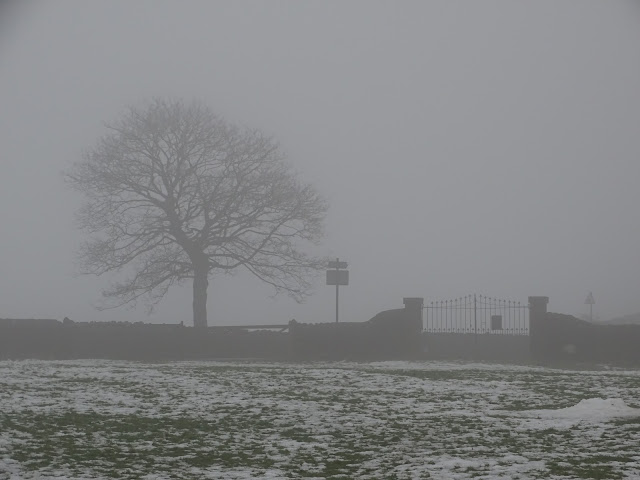 The faded splendour of the original Victorian gates perfect for the eerie atmosphere and with the crows flying silently over head adding to that abandoned Gothic mansion feel. 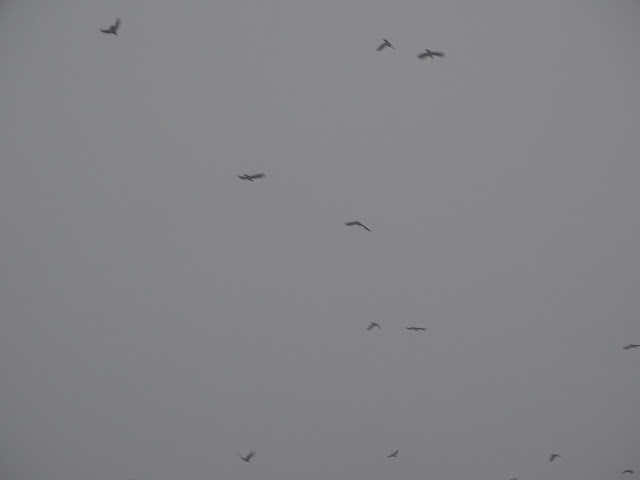 The next field was filled with sheep, not that you could easily see them, they were fleeting ghosts in the far distance. 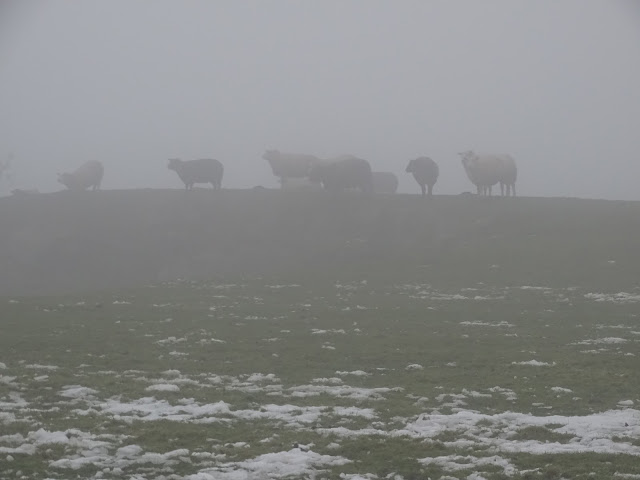 The only obvious evidence of their existence was the trail of trampled fodder, which despite it's bedraggled appearance still gave off that fruity sweet perfume of meadow hay so reminiscent of heady summer days. 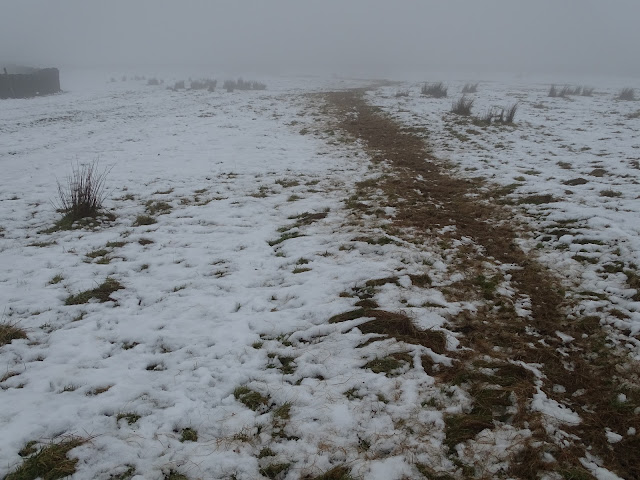 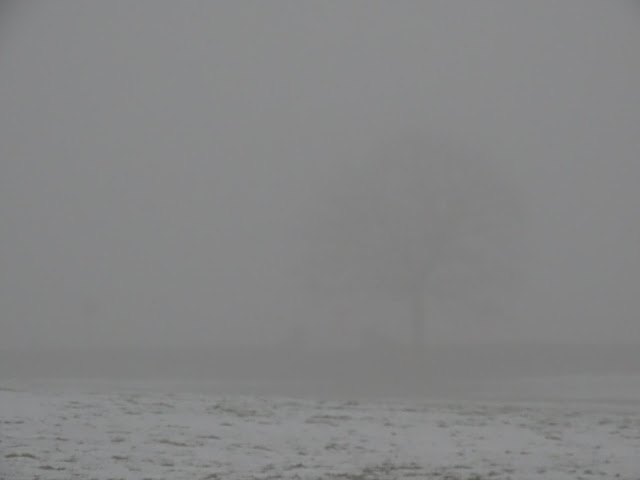 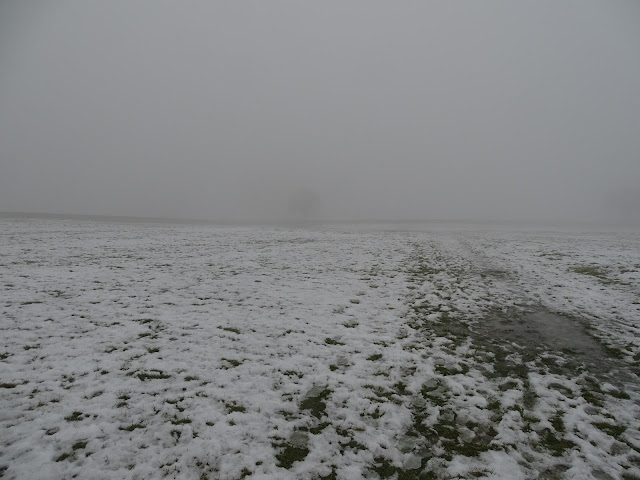 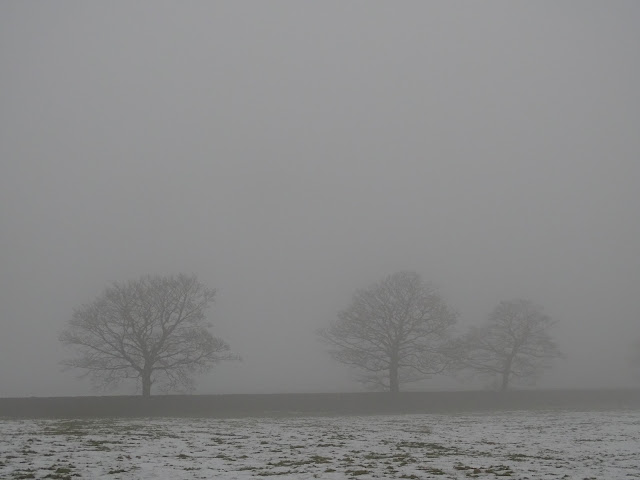 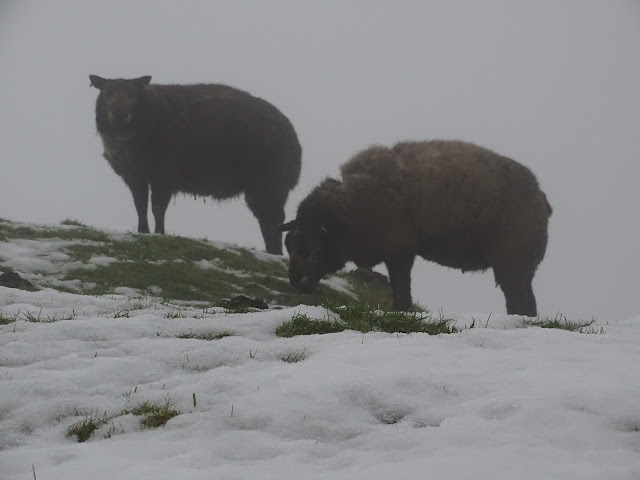 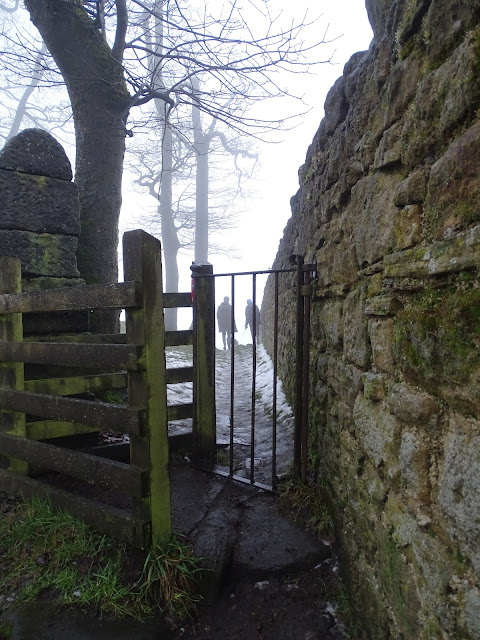 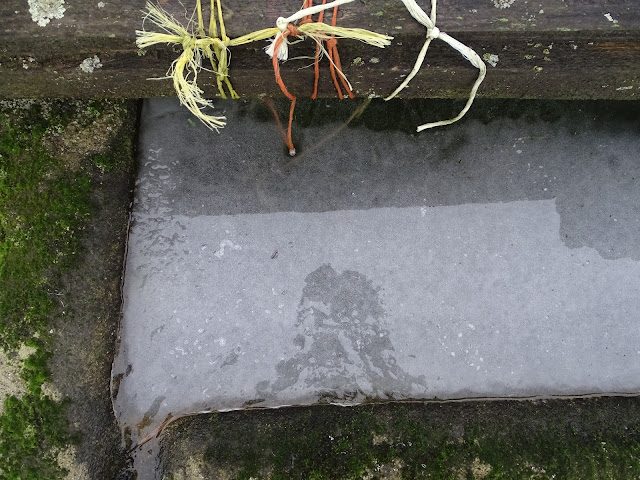 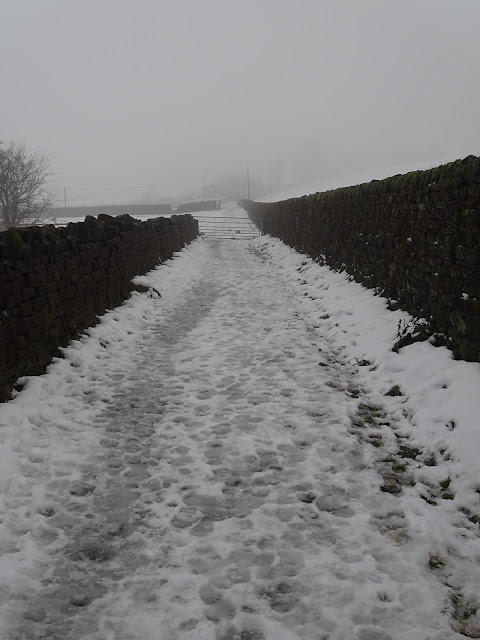 On our final return stretch, we could hear cattle bellowing raucously in the 'invisible' distance. As we approached we could make out a huge steaming mass of cows and calves with the one cream coloured bull squeezed into the middle. They had heard a tractor bringing their food and they bawled rather loud encouragement at their farmer. 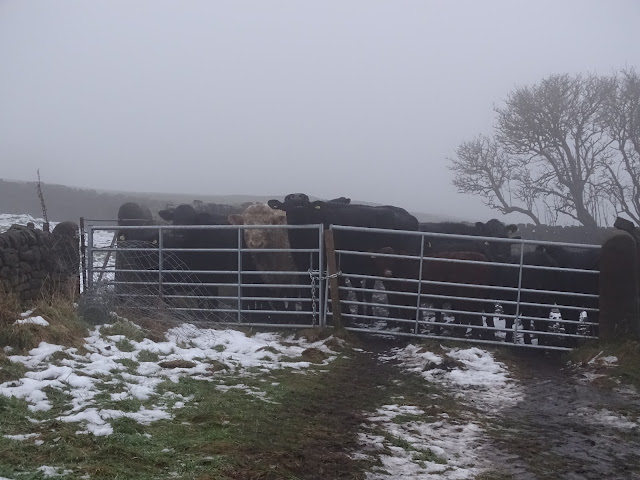 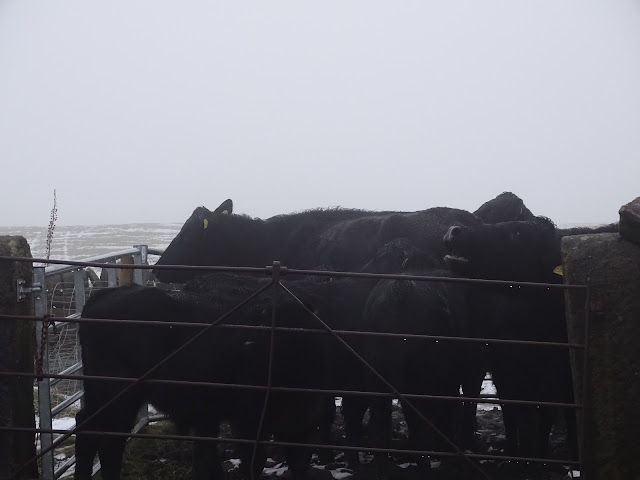 The matriarch cow, taller and certainly louder, reached up and managed to grasp a mouthful as the tractor approached. As soon as the bale had been placed in the galvanised feed ring, the bellowing and hollering stopped and all we could hear was the tractor trundling back towards the farm and the sound of satisfied chewing of fodder. 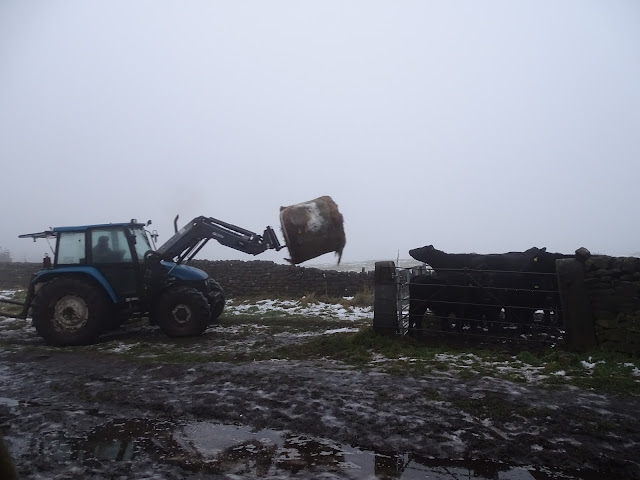 Then once again, the only sound was our boots slipping or crunching through the rapidly melting snow. 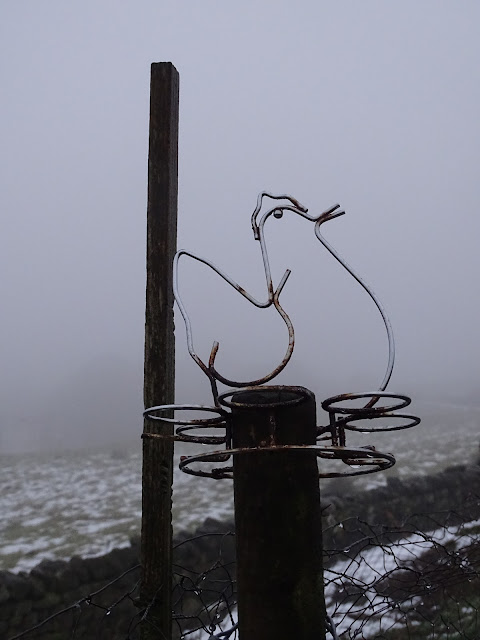 Although it was still raining, my initial reluctance to walk had all vanished, the air still damp and cold had been refreshing and invigorating,  now I was ready - as we all were - for a mug of tea. Time for one last run around, then home xx 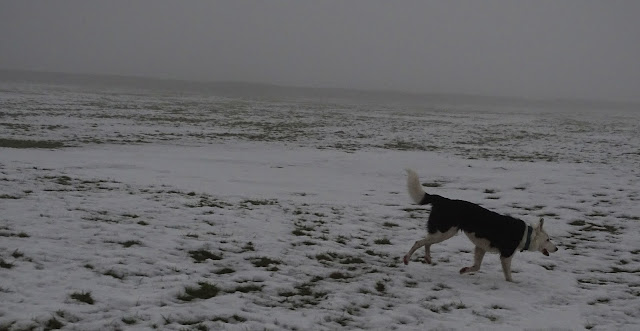 Thank you everyone for joining in with last Friday's photo hunt - a lovely selection of stories and photos. Here is to our next Scavenger photo hunt, Friday 15th January - this week's theme is NEW. Until then have a good week x
at January 10, 2021