Sunday started as an at-home-day, we had jobs to do, bulbs to plant, washing to work through, general tidying and house care, when we said, almost as one .... 'Why don't we go out in the van - TONIGHT?' There was a moment's silence as we stared at each other, then we sprang into action.

Clothes were collected, food sorted, boots, coats, hats and gloves found, camera and phone chargers switched on and the van packed. Within a couple of hours of sorting out the house and garden, we were driving off to the lakes. Darkness fell fairly quickly and although it was early evening when we arrived - it felt very late! 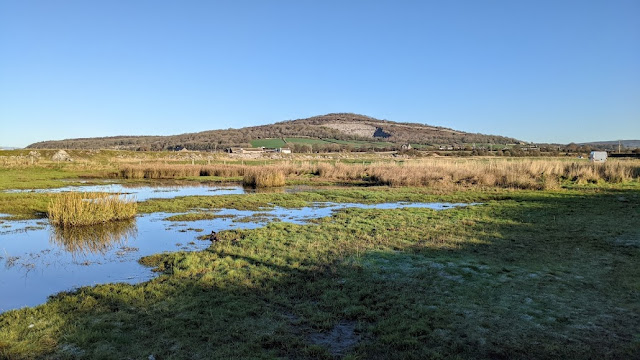 Our chosen spot for the night was a coastal road with permissible parking for vans and after we'd eaten, we soon fell asleep. In the morning our view was of the frosty estuary and the bluest of clear blue skies. 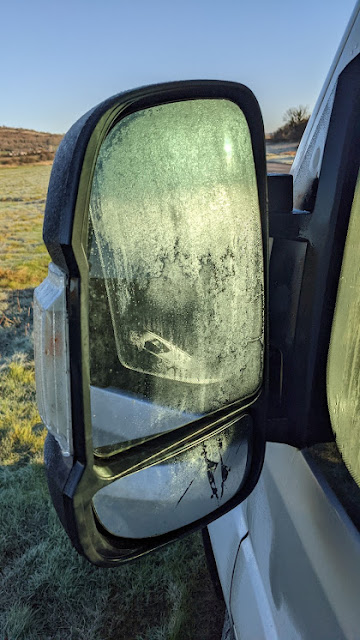 Himself brewed up mugs of steaming hot tea and coffee, we curled our fingers around them as we felt the early morning chill on our cheeks. I could smell the metallic tang of wintery air. After breakfast and a quick dog walk, we headed into Carnforth and spent a very happy hour or so in the bookshop. Himself could have spent a fortune but I was more intrigued by the architecture of the building with stairs that seemed to vanish or only go down a step or two then after one stride immediately come back up. There was room after room of books on shelves up to the ceilings with some of the rooms with the perfect chair for curling up and reading. Floors were on many levels and rooms looked like they had been added on as an afterthought! 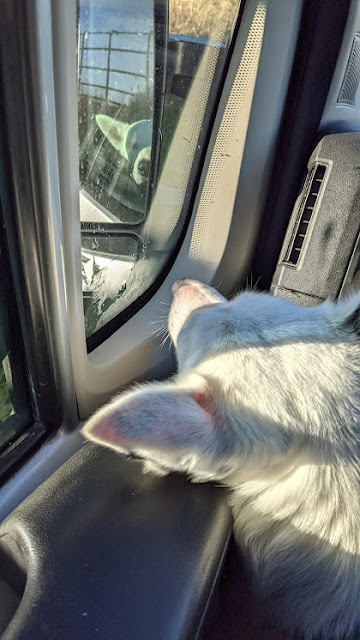 After a while we felt the pull to be back out and on with our walk and Moss agreed, so we drove to our chosen parking spot and as I made sandwiches and Himself sorted out maps and boots - a robin appeared and insisted that he'd NOT eaten A THING all week. We humoured him and I crumbled some cheese, raisins and bread on a tree stump. 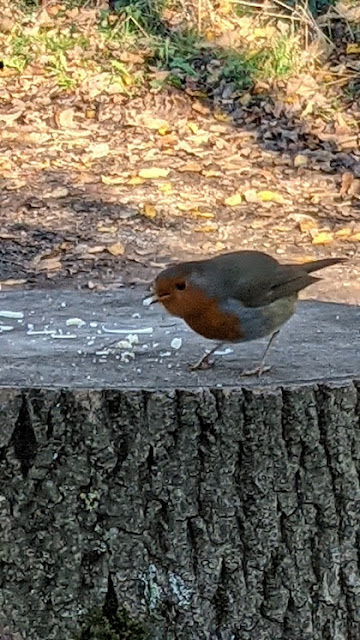 Robin fed, boots on, lunch packed and map at the ready we set off. As we left the car park we noticed the same robin had cornered another unsuspecting walker who had also fallen for the 'I've not EATEN for a WEEK' and was feeding his sandwich to it! 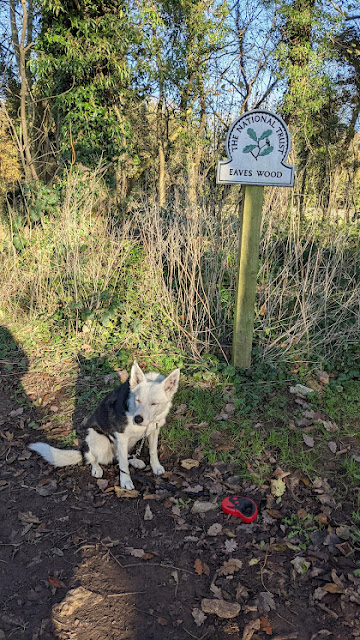 Our walk started in Eaves Wood - one of my favourite places but today's route only skirted through a small edge of it and soon we were heading towards Gaits Barrow. 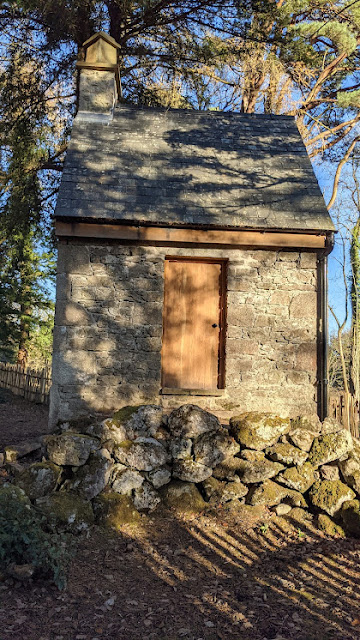 We have stopped at the little summerhouse before - about three years ago and it was barely visible from the track and having spotted it, we noticed it's rather dilapidated state. This time we could see there had been a lot of love and restoration lavished on it. The doors, soffits, roof, guttering and pointing had all been replaced with new and it was sporting several bat boxes and swallow and swift nesting points. 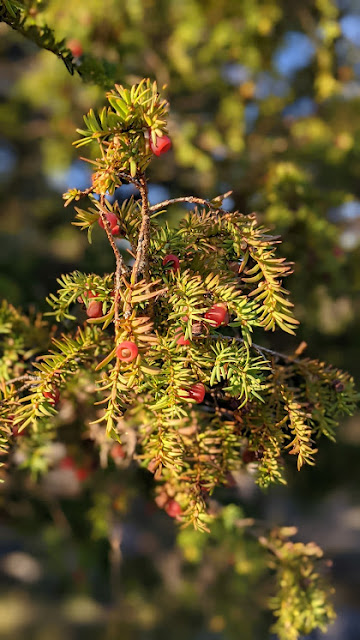 Our route took us through ancient tracks, alongside woodland, in and out of farmland, by streams and in the company of curious heifers who cautiously escorted us from one end of their huge field to the other. 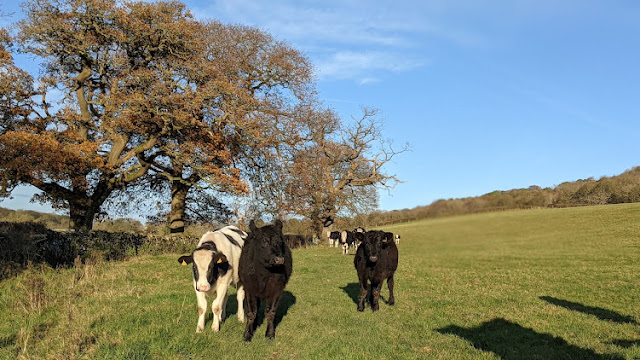 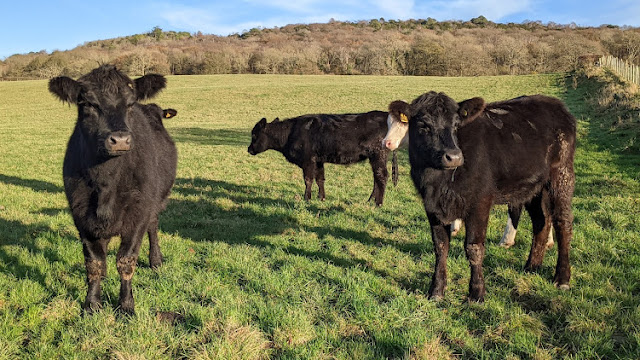 Suddenly we arrived at the nature reserve - far too early - I must be very much fitter than the last time we walked this way! So we made the most of the late afternoon light and took photographs of the amazing reflections. Looking at the water was like looking into another realm! 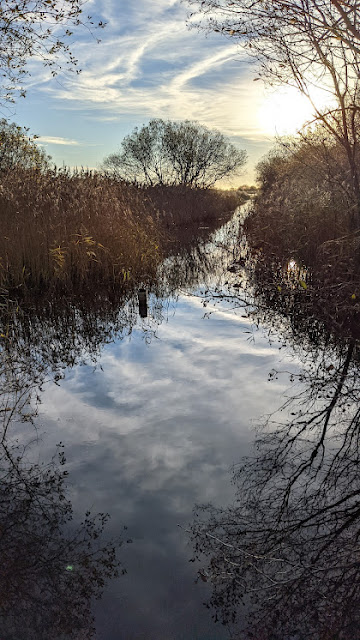 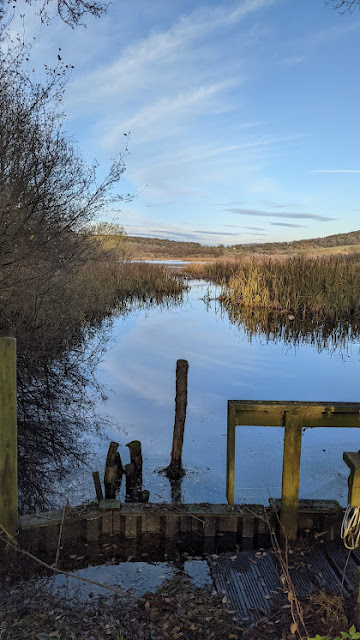 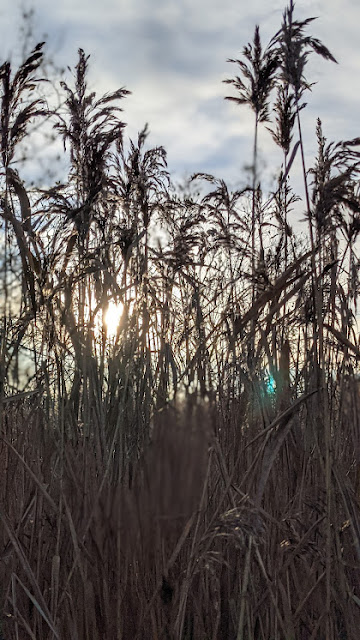 We then walked back to the van in the last of the afternoon sun, dropped off our bags and fed Moss, tucked her up in her bed and after a quick cuppa, set back to the nature reserve to watch the evening's entertainment - the whole reason why we were there! 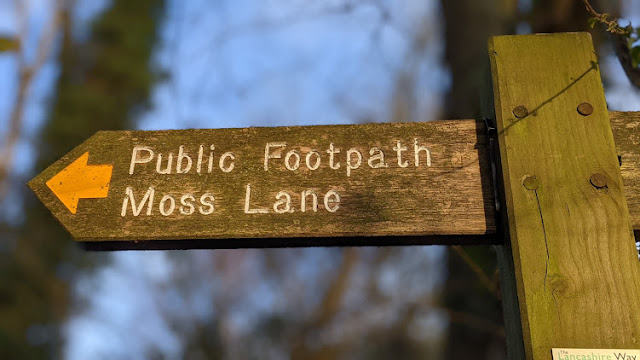 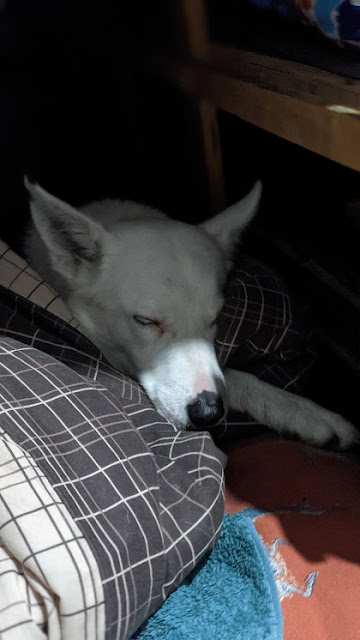 We stood on the nature reserve's causeway track which goes through the moss and reed beds, people were spread out all along, waiting and watching as were we. 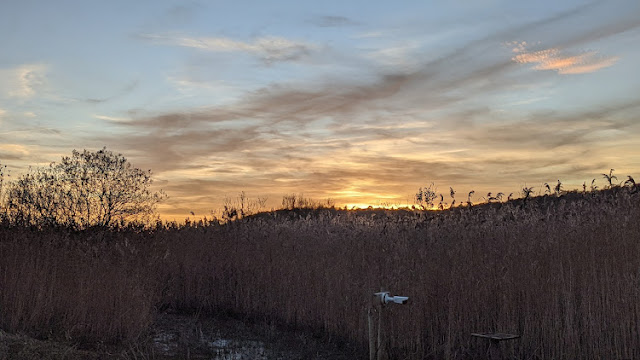 Then the starlings started to appear - first small groups of 50 to 100 birds. As they flew overhead we could hear a whispering woosh of their wings, then a millisecond later the split splat splot as their droppings hit the floor - a hazard of watching them!! I tried videoing them but my efforts do not do their aerial display any justice. 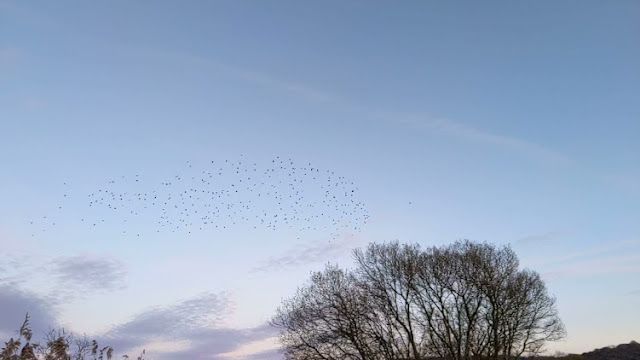 (I am afraid that blogger wont let me down load the videos - grrrr. So I have removed the link and added another image instead)
As a display it was not as monstrously magnificent as it had been last time we were there, however this year it was directly above us and although lots of smaller displays (hundreds rather than thousands) it was amazing to watch. We were so so much closer,  close enough to see that magical invisible chord the birds have as they twist and turn without so much as a peep of control. They twirled and swooped (and pooped!) over and over and around us then with a silent accord they dropped into the reeds. It was at this point there was a rallying cry and the birds twittered and chattered at an ear deafening chorus - it gave me goose bumps galore! 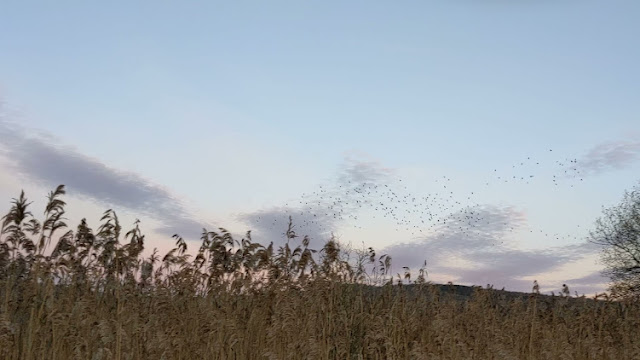 By this time it was almost too dark to see so we stumbled our way back to the van as did most of the other spectators. We were almost back when we were startled and in turned spooked a Roe deer and for a brief moment we stood staring at each other, then it silently vanished in the dark woods. Oh so spellbinding! 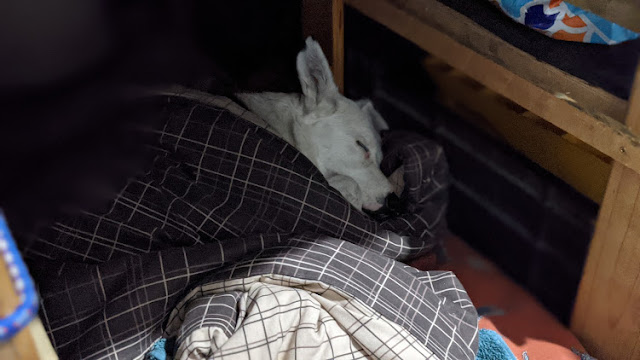 When we opened the van - our dear dilly dog was still fast asleep - full tum and warmly wrapped in her duvet - what a life!

We drove off into the night back to the shore road; there we had a mug of tea as I cooked, filling the van with a warming scent of our meal. Our conversation was of our day brimming with precious moments of magic. And tomorrow was still to come🐾💗