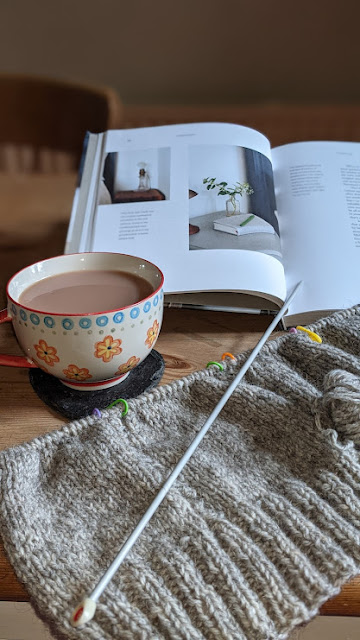 A day or two ago, whilst doing some valuable research (erm perusing Pinterest) I stumbled across a link (like you do) and followed it's enticing invitation which lead from one thing to another then suddenly I discovered I could time travel and had been missing in action for hours and hours and days and days (well - that last bit was a slight exaggeration) However, I did come across 'Simple Matters' by Erin Boyle. 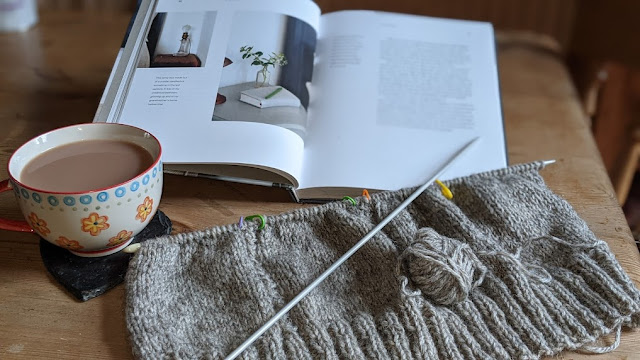 I did a bit more research and found a second hand copy from a smaller independent book seller and promptly bought it. Which, as I was reminded, was a bit of a contradiction - purchasing a book on how to declutter - hmmm - may have to think on that conundrum. Any hoo, it landed today and I decided that I would curl up with a brew, the book and some knitting and quietly read away. The weather outside was doing it's best to be dreary and I really wanted to get on and knit.

Because by page 20 I was up and in the bathroom going through the cabinet and sorting out the shelf of shampoos of doom (we have more than we need - I may have mentioned it before - there are spares of all shapes and sizes kept by both boys and their girls). I had not realised how many were half bottles of the same varieties, so they were all upended to reduce the quantity. Nearly finished tins of hair wax, old sponges and nearly empty shaving gel and deodorants (all the lads I hasten to add!) were sorted and thrown away, the shelves wiped and the few survivors returned trembling to stay another day.

While I was up there I changed the towels, chucked them in the wash and gave all the plants their weekly sauna (they all jump into the bath, have a shower then drain before being returned to their usual places).

I came down to take out the now washed towels and decided on a quick brew and another glance at the book - I devoured several more chapters and found myself taking all the 'stuff' off the dresser and dumping it on the dining room table. The dresser was given a good clean and each..and..every..item was given a good looking at before being moved either back to the dresser or into the paper skip (why on earth do I still have a catalogue from a company I don't use?) or in the recycling, charity shop box or bin. It felt rather cathartic.

I noticed that the carpet where'd I'd been sorting things out needed vacuuming as snippety bits of paper and fluff had been produced by my over enthusiastic tidying up. 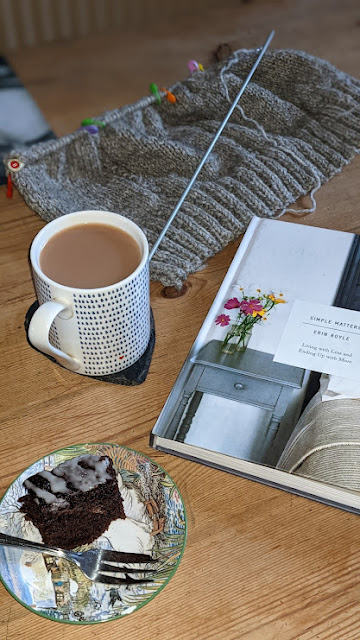 By mid afternoon - I'd decided that I was ready to stop, it seems that I once again I had been time travelling!
So I put on the kettle and rewarded myself with a few rows of knitting and a chunk of the softest fluffiest chocolate vegan cake. It is scrumptious and I shall share the recipe with you tomorrow - until then you can feast your eyes on this .... 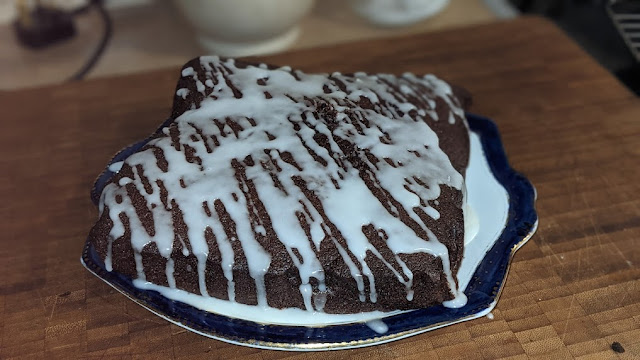 And know that each mouthful of chocolate cake is laced with the sharpest drizzle of lemon icing and the contrast is mouth watering!
I shall now go and walk off the calories with Moss - until tomorrow!
#blogmorevember
at November 08, 2021