On the way home from work, tootling along the motorway at a rather sedate pace of 60 mph, I was over taken by a small black rocket .... well it was a small black car - however it was going so fast that I felt my car pull towards it in the rush of air filling the 'vacuum' behind the rocket car.
Within moments there was 'beamer' (an undercover police car) screaming down behind it and although probably going as fast, it did not have the same wooshing effect however it certainly made my almost daydream driving wake up with a bit of a zing! Another minute or two when a second police car, this time a dog unit - flew by, but not quite as fast.
I still had about ten minutes of motorway driving until I arrived at the end of the road, went around the roundabout and turned off into the town. I was (as was the car both in front and behind me) almost hurled on to the side of the road as yet another police car screamed by. By now I was on super alert - watching both forward and back having been en route of something rather exciting and not really wanting to be any more 'involved' than I had already been.
I arrived at the next roundabout, turned off at the first exit where I could see a policeman rushing around with something in his arms - the traffic slowed down as there was obviously something happening - his car was abandoned up on the pavement with all it's lights flashing like Blackpool promenade. As I approached I realised what he was doing - he was about to set up a stinger - a trap to puncture tires of a moving car used to slow down a car trying to evade capture. It was at this point I realised that 'something big was going down'!
The line of cars going into town was quite slow, obviously everyone was being cautious as first a riot van then armed police flew by towards the stinger operation. I was glad to get home!
Then I heard the helicopter - I went outside and looked up and there was a police heat seeker helicopter hovering above my house - oh.
I went back inside and locked the door! Shot upstairs to the attic and opened the window and watched a full scale police search and capture unfolding in the fields in front of me! How exciting!
There were T-pac police cars (the cars used to trap escaping cars by boxing them in and pressing them into the side of the road), sniffer dogs and police running all over the hill side - and I had a ringside view from the attic window with a helicopter keeping me company as it circled and hovered above the village.
Once it had all quietened down, I checked our village fb page and found out that it had been a trio of drug dealers who'd stolen a car and tried to evade capture by bolting into the country side and into MY village - how very dare they!! But it was all in vain - they had their collar's felt and were banged up! woop woop!
After all that excitement - I had to sit down and have a mug of tea - aaaah that's better.
And today's photo? Three little 'Scandi-style' festive fir trees - part of our creative workshop today. 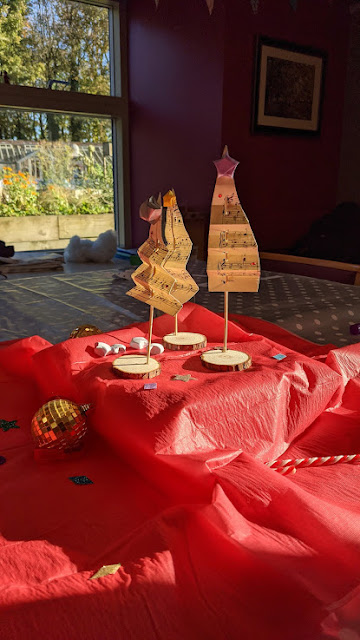 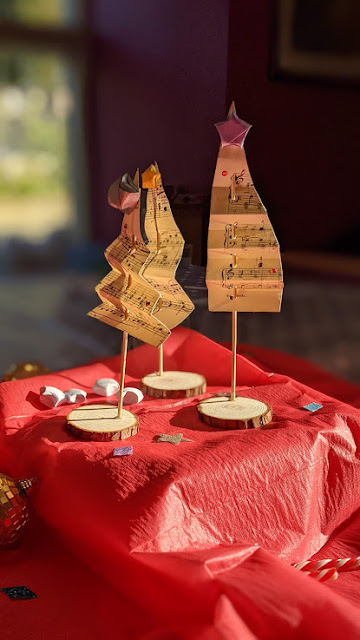