At the beginning of the year we attempted to cross the sea over a shingle rack during low tide to the island of Hestan. We failed miserably due the rather inclement and bad tempered weather and our insufficient planning.

Once home, we did a bit more research, studied the waxing and waning of the moon and the height of the tides and with a bit of wrangling of holidays - managed to get a long weekend when the moon was at it's most full. Talk about excited!

We drove up to Galloway on the Friday, planning our island invasion for the Sunday.

Sunday dawned clear but we knew we could not go too early as the tide would still be high, so we spent a gloriously sunny day at a classic car rally (which I will post about soon) then later returned to our camp-site to sort out our haversacks and pack ourselves a picnics.

To get to the end of the peninsula before we could cross the rack would take us about an hour to walk so we had to factor that in our timings too. 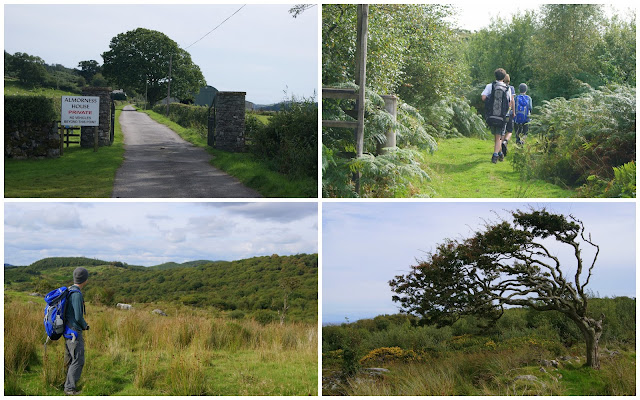 We set off, following the tarred road which dwindled to a stony track then a wild foot path, finally fading to a vague hint of a route over rough moorland.  Surprised sheep watched us as we trekked through their coastal grazing grounds. 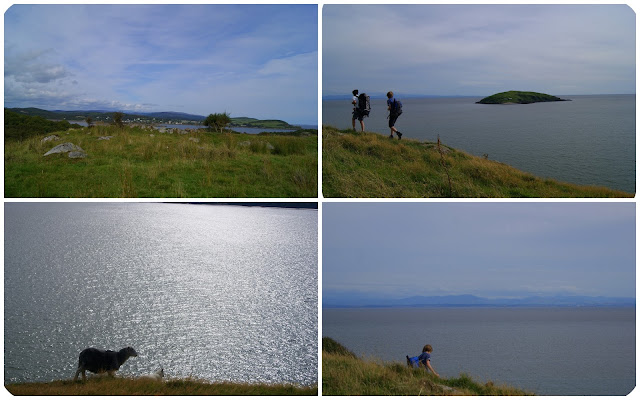 The sea finally came into view as did Hestan Island. Still cut off - still inaccessible. 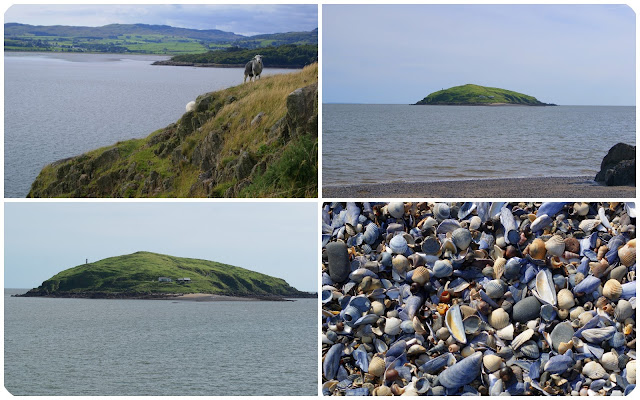 The beach was a welcome relief from the rough descent we'd had.  The boys muttered dark things about being ravenous so we cracked open our picnic and ate some of the most delicious pies ever. I'd bought them that morning from a local farmer's market as a treat and they were just perfect for our setting. 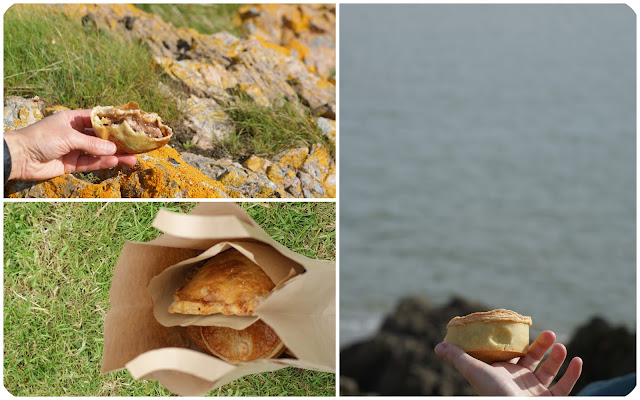 Slowly slowly the tide began to recede and the rack started to show. Exposing the changing beach and revealing seaweed and a mermaid's purse. The boys explored and splashed in the sea while I managed to knit and take in the view. 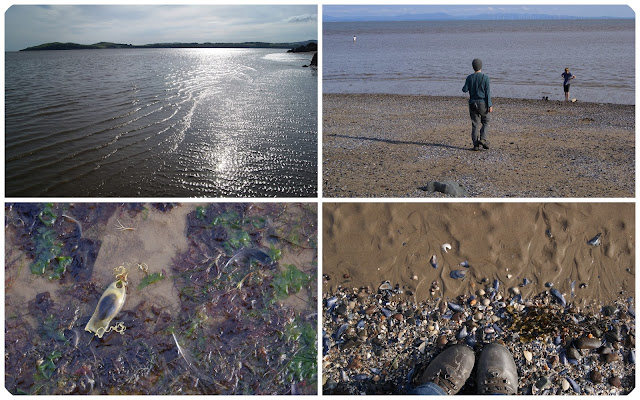 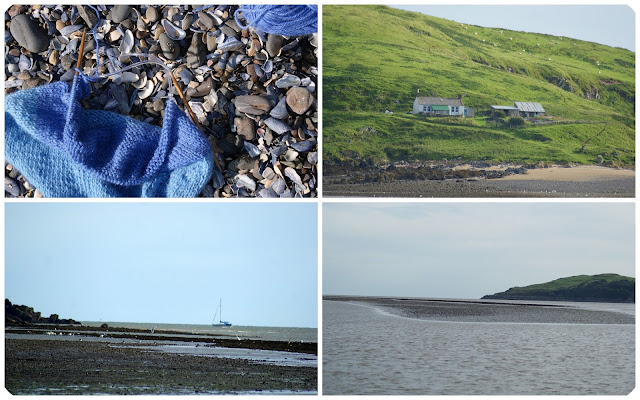 The boys became impatient and tried to wade out across the waters to the start of the rack. I was not so impetuous and waited and watched as they forded and returned. Himself pronounced it safe and gathered his haversack and slung his shoes over his neck. Youngest did the same.  However Eldest and I watched as they set off, struggled a little then returned....they would try further to the left. They set off again and returned as the waters seemed higher than they anticipated. 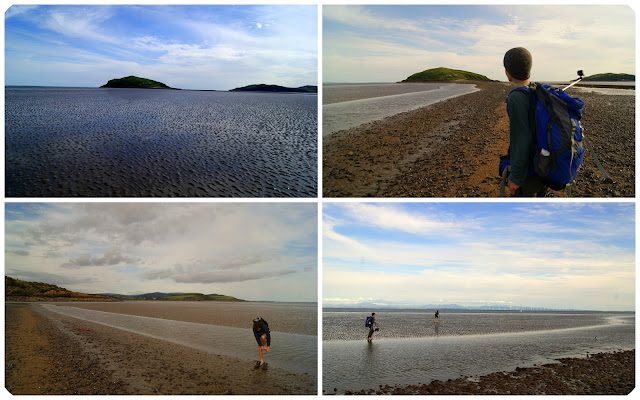 Finally a safe crossing place was found and I was persuaded to join them, Eldest was as reluctant as me but when I was going, he too rolled up his trousers and slung his shoes around his neck. 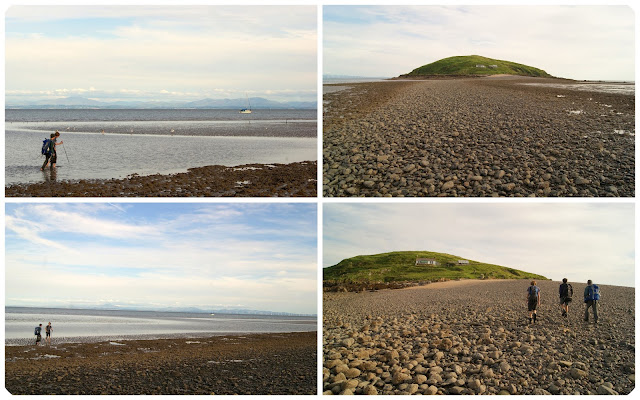 The water, although cold was not unbearable, which had been my main concern. We soon crossed the receding waters and arrived at the incredibly rough and stony rack. Boots were hastily donned. We then trekked over the uncomfortable terrain watching as the island and it's little cottage became closer. 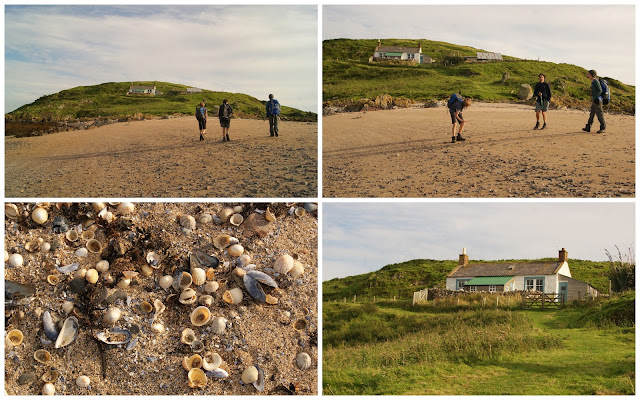 The rack then rose upwards towards a small but beautiful shell covered beach which in turn rose upwards to grassy dunes and grazing pasture. The small cottage looked well kempt and the garden looked like it had been working through the summer but had now blown over. 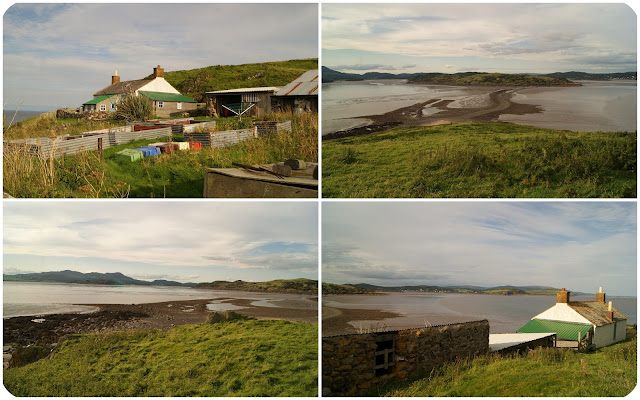 We climbed to the top of the island and despite it's rather low and neat mound shape it had the most amazing 360° view. We celebrated with a mug of tea and biscuits before setting off around the perimeter. We found the lighthouse and the small flock of resident sheep - who seemed quite horrified at the human invasion on their patch! The sun was sinking in the sky and we could see the tide was now at it's lowest and would start to trundle back. 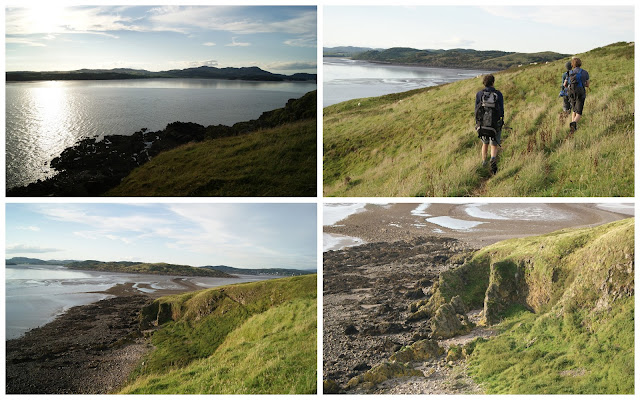 As we rounded towards the rack, I spotted 'Elephant Rock', I knew it existed but wasn't too sure where it was, so I was greatly excited and may have squeaked a little.....the boys are used to me now and took it all in their stride :) 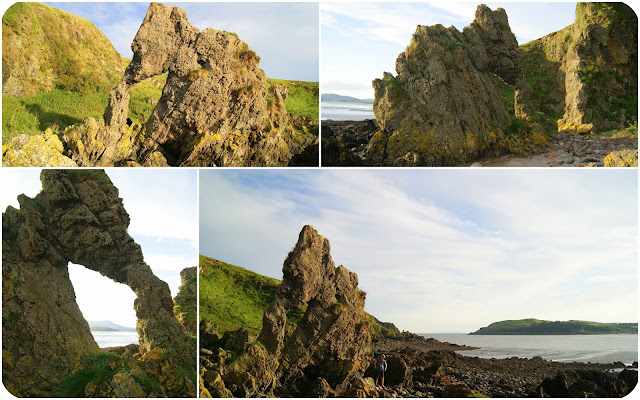 It is an enormous rock formation (Youngest can be seen in the bottom right image) which certainly impressed us, sadly we could not linger so we continued around the shore line back to the beach and then set off for the rack linking us with the main land.  It was as uncomfortable a return walk as it had been to get to the island - but then, if it were easy then the rewards would not have been as great! 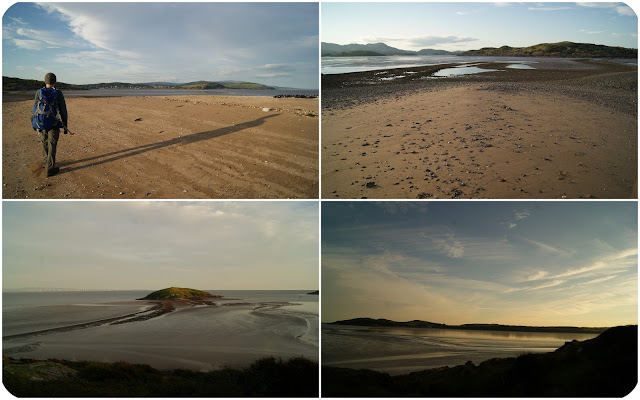 The sun was setting and for a short while as we pushed through the scrub on the mainland we lost sight of Hestan island. When we reached the other side of the trees- the island was once again cut off.... we had made it. 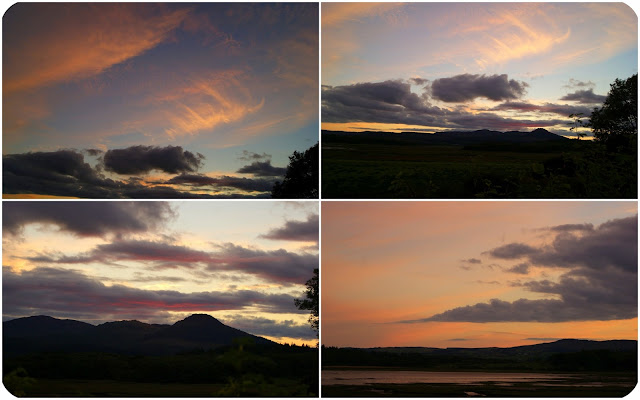 By the time we'd finally reached the car it was quite dark and I suspect I was not the only one to have grinned most of the return journey!

We had walked to the island and it felt brilliant!