Saturday's are for adventures

Youngest has finished his second year at uni so we arranged to meet up him on Sunday and help bring back all his goods and chattels he'd accumulated over the year. We went up on the Saturday, taking the long way round, driving through the Trough of Bowland, stopping for lunch and a walk. 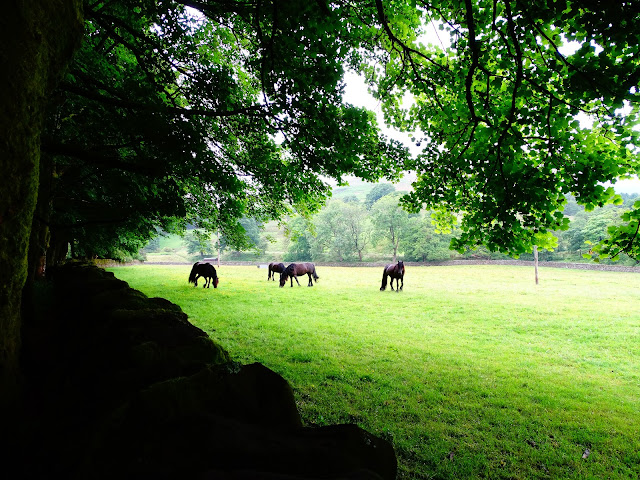 We walked up Langden valley which is full of water treatment works capturing water coming off the moors. Tucked just in visible view is a stone mermaid sitting watching the water gush through the channels. I have photographed her in the past but the hedges have grown so much that we could just about see her but not well enough to take a picture. 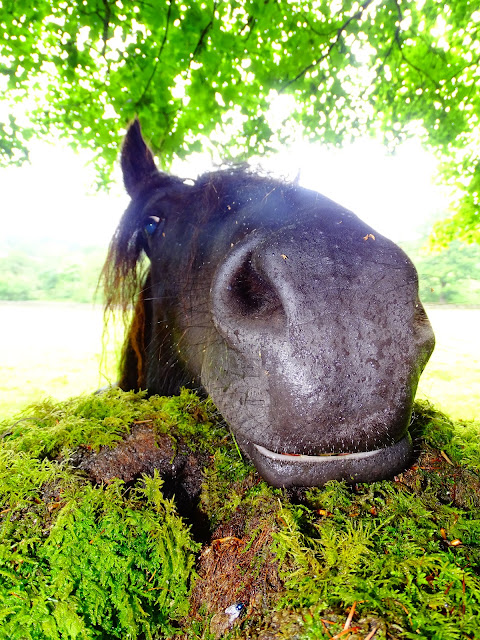 Along the road we came across a small herd of what I suspect are Dalesbred ponies - with the most gloriously feathery legs. One of them came up and inspected us over the mossy wall. He had the softest velvety nose which he allowed me to stroke. 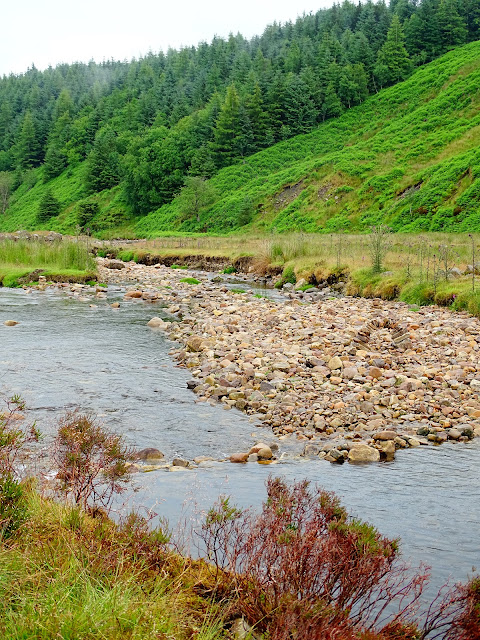 The river cheerfully babbled over the large pebbles however either side of the bank was evidence of previous torrential flooding where the edges had been ripped up and huge boulders tossed aside. The water must come down with some incredible force as the scarring was very much wider than today's benign little stream tumbling off the moors. 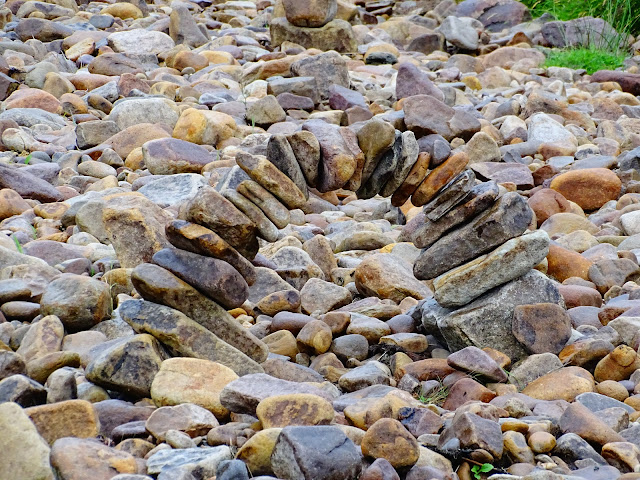 We'd set off in wellies and waterproofs, clutching umbrellas and hoping that we'd stay dry. It soon became hot and muggy and all forms of rainproof clothing were cast aside and stuffed into my haversack. The walk was lovely - wild and desolate moorland scenery with the occasional sheep grazing in the undergrowth. 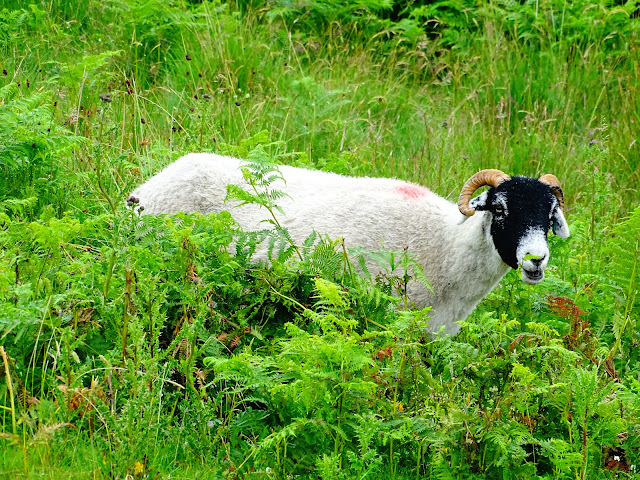 We returned to the van and seeing we were surrounded by other walkers and day trippers, a noisy catering truck and a long queue, we moved the van a little further up the moorland road and stopped in a completely empty parking site. It was lovely and quiet with a trickling stream just in front of us and we sat with a brew and listened to the swallows chittering and the swifts screaming. Moss curled up on her cushion in the cab and dozed with half shut eyes. 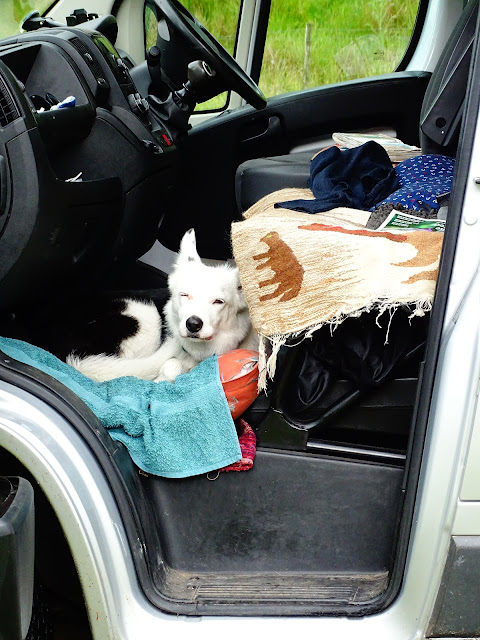 Why does a mug of tea made in the van and drunk in the countryside tastes so much nicer? 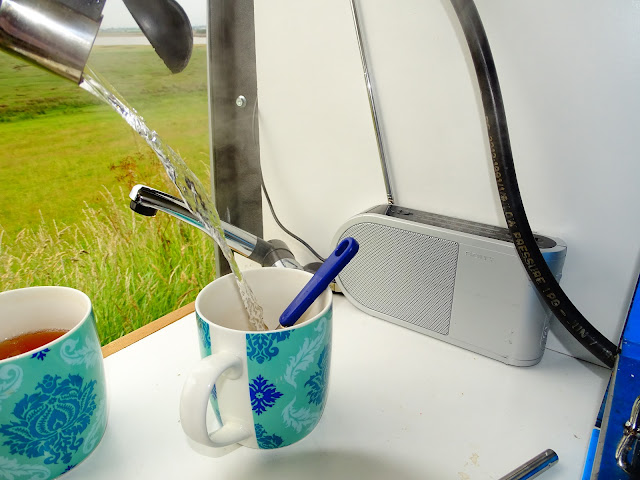 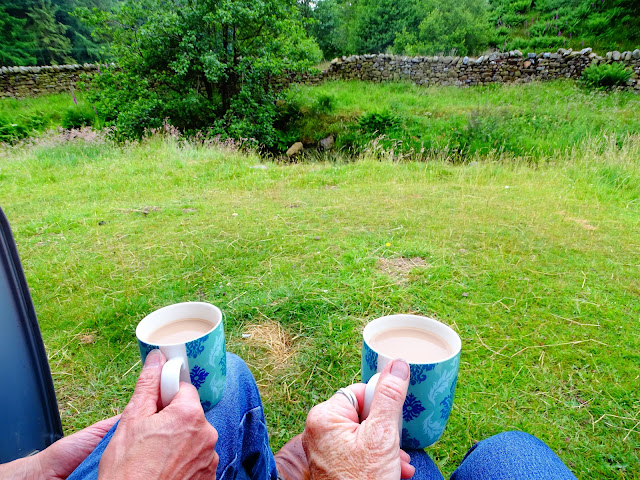 Having rested a while, we jumped back into the van and headed off to our stop for the night. We were not meeting Youngest until Sunday afternoon and our weekend adventure had only just started. 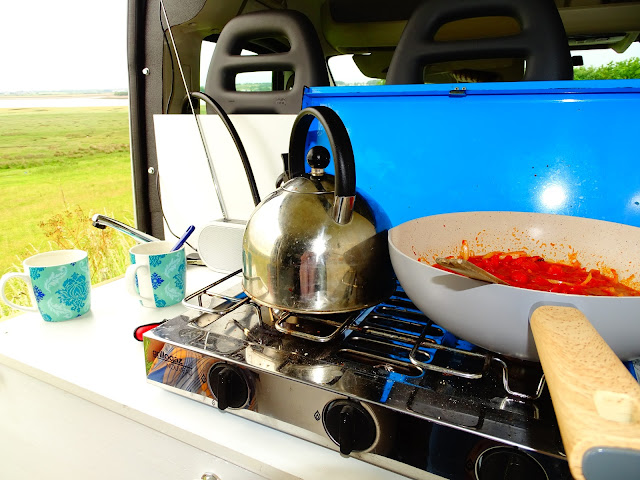 We parked up and I started cooking - we were starving by now and ready to eat. Shortly afterwards, we were sitting blowing on forkfuls of steaming hot pasta watching the ever changing sky. 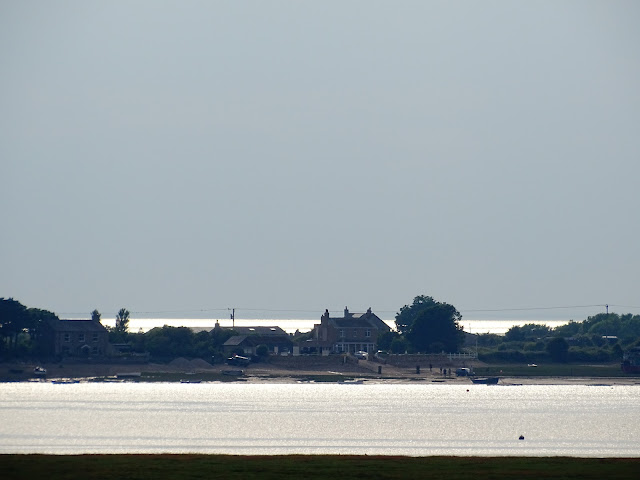 The stormy weather was all around us and the sky had taken on a strange shade of blue. The sea glistened a startling silvery white and views flattened through the hazy humid air. 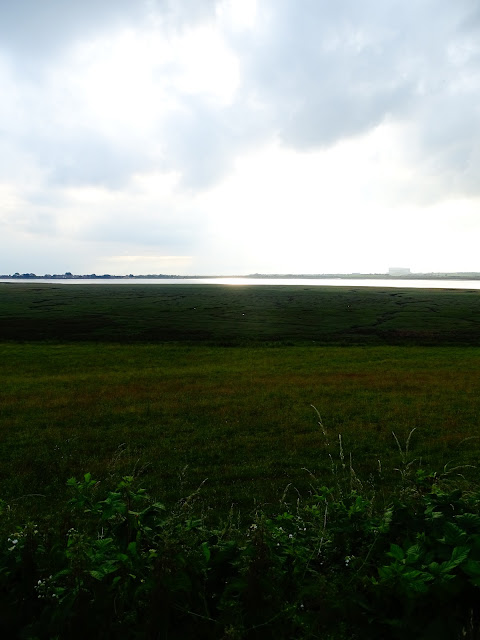 With one eye on the huge clouds building over the seas, we set off for a short walk along the estuarine edge, round back along the canal with a quick stop at the marina basin for Moss - she was warm and muddy and she was keen for a cool dip. The humid air was filled with the heady scent of the honeysuckle in all the hedges along the canal - it was a rich and delicious fragrance. 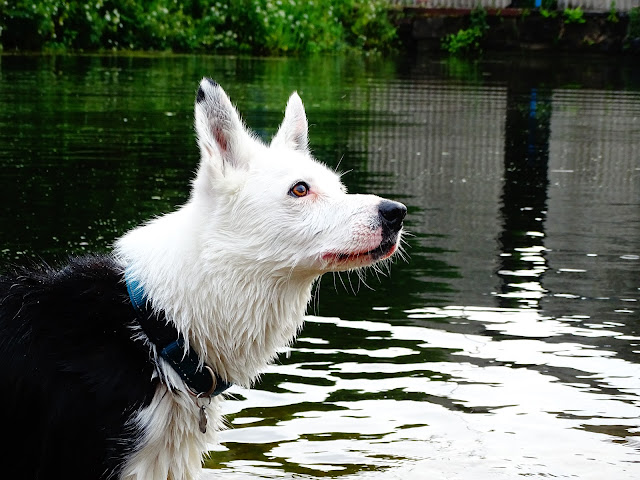 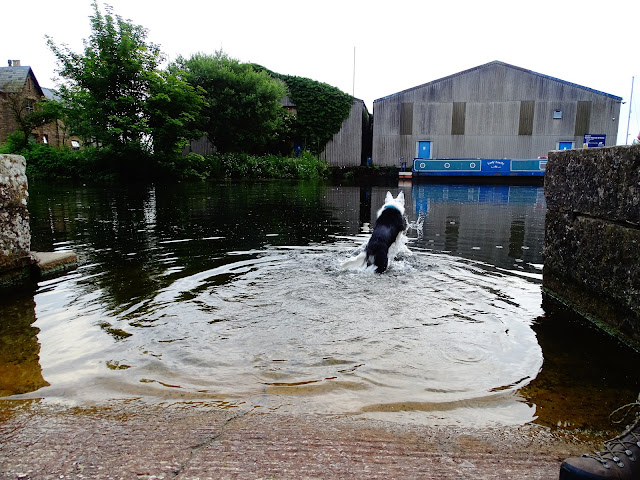 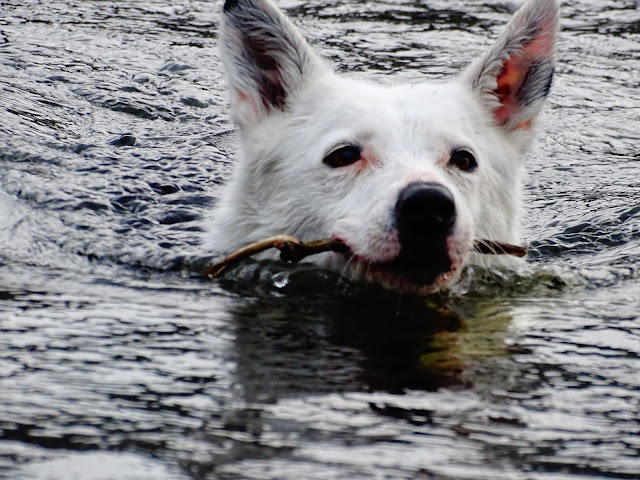 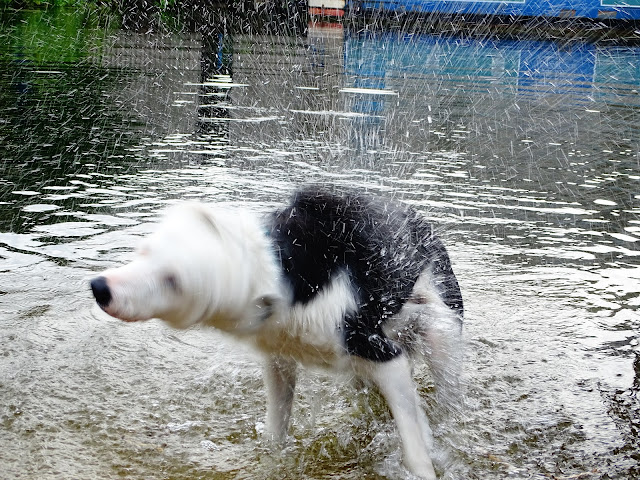 Himself checked the rain radar on his cellphone and suggested that we set off back to the van at a quick pace - we did not want to be caught out. 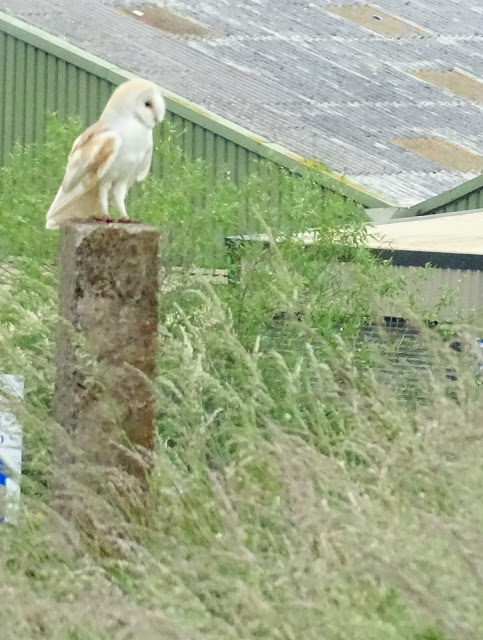 We'd not been back long when a barn owl silently flew past on an evening hunt and we held our breath in excitement as it landed not far from us - just long enough for me to take a picture through the van window. 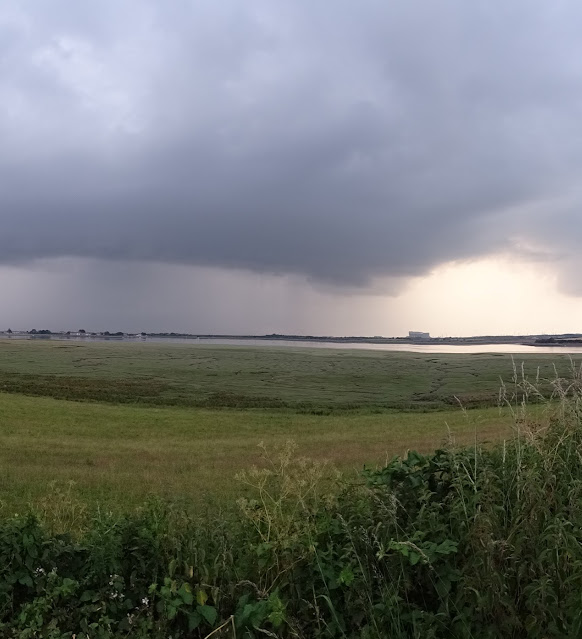 Again with brew in hand, we sat and watched the storms roll across the sea and clash as they reached the shore. We could hear distant rolling thunder and the air felt electric. It then cooled and a breeze whipped up tossing the clouds towards us - we watched as long as we could then as we were about to retreat into the van, a searing white fork of lightning zapped downward and hit the power station across the water. The resulting thunder clap was the loudest one I have ever heard and all the water fowl down on the marshes and on the sea all rose up screaming and flew off rapidly to safety. 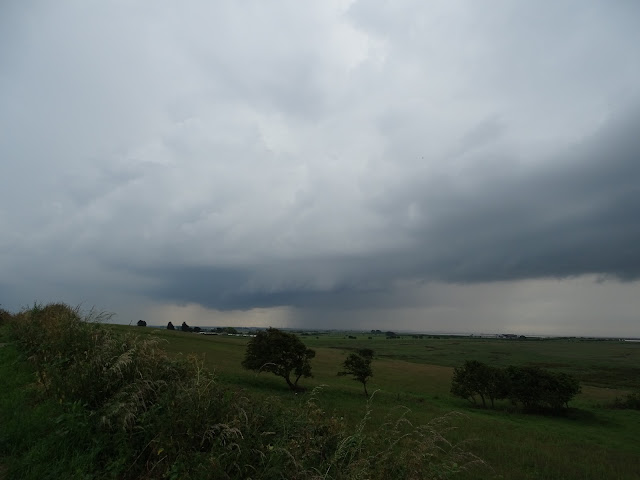 We closed ourselves away just as the rain hit the van and we listened in delight at the clattering raindrops as they hit the roof - the thunder rolled on and round us - it was brilliant.
And tomorrow - Sunday - was another adventure just waiting to happen 😊
at July 04, 2021