On a whim and spurred on by the fact I had one day left of my leave which needed to be used before the end of the month or I would lose it - Himself and I took last Friday off - added it to the bank holiday weekend and went feral in Dumfries and Galloway for four days! 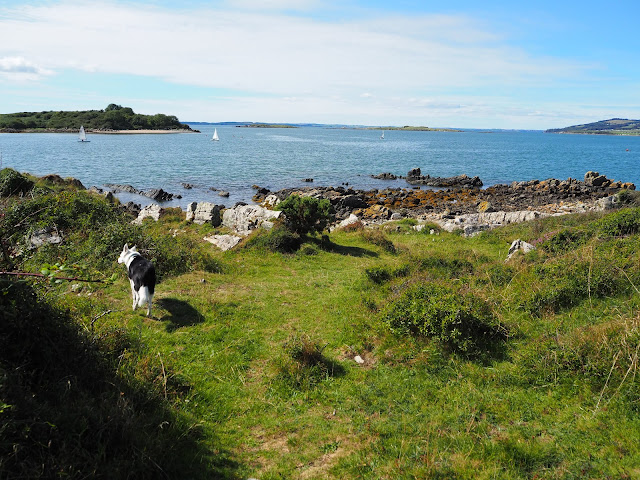 We have some lovely memories of the area from our days when visiting with the boys and we wanted to revisit some of our old haunts as well as discover new ones, so Zeb (our van) was packed first thing on the Friday and by mid morning we were trundling up the motorway at a very sedate pace. Himself was feeling a little under the weather so despite me suggesting we stay home until he felt a 'little more human' he decided that he'd rather go and breathe in some fresh sea air and walk some gentle woodland tracks - so that is exactly what we did! Nature's curative powers are not to be sneezed at. 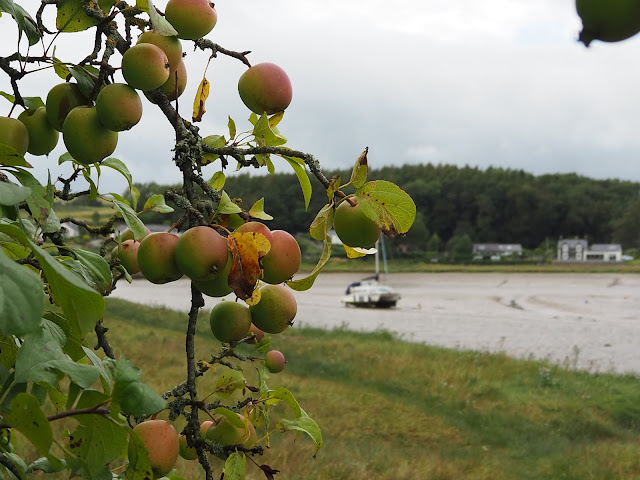 We stopped a couple of places on the way up for a mug of tea and a breather, one of which Himself was incensed at the amount of litter and spent about five minutes collecting a bag full of recyclable bottles and cans - why on earth are people STILL so lazy/ignorant/awful/thoughtless???? 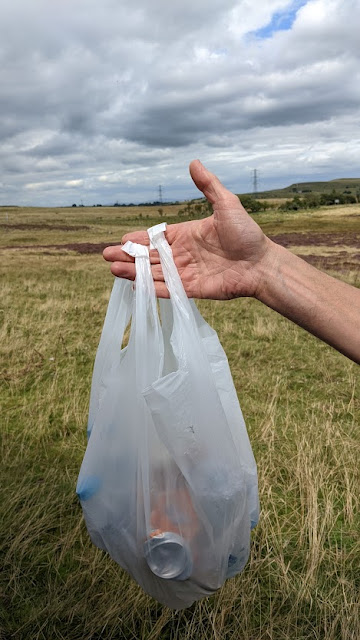 We arrived in Kirkcudbright, and having found ourselves permissible free almost wild, off-grid parking, we wandered into the town via the estuarine coast line. Breathing in that tang that only coastal air can give you was delicious. Moss was besides herself wanting to leap into the tidal waters. We had to stop her as the tide was out and to get to the water would have entailed floundering through metres and metres of super stinky, super slippery mud - which she would have done (with such a silly grin on her face) but the thought of having to de-mud an idiot border collie had us recoiling in horror! 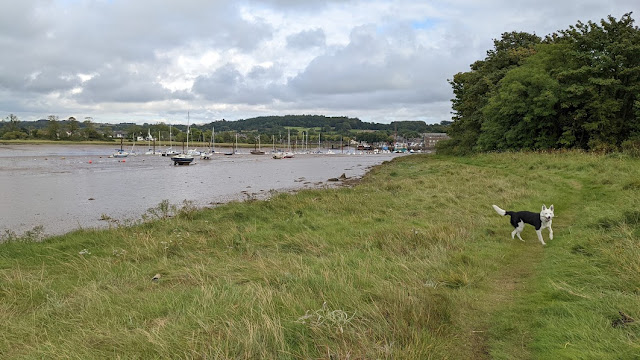 Wandering around a sleepy town full of quirky corners, cute cottages and narrow passageways is always a delight. I could have spent long time snapping images but Himself and Moss were both hungry so we returned to our van. There was only one other van parked up, the owner I'd spotted earlier in the local shop - a very distinctive looking bloke sporting a magnificent head of dreadlocks. His van exuded a delicious scent of incense as well as a festival vibe soundtrack - we were gently entertained by him as we ate our meal. 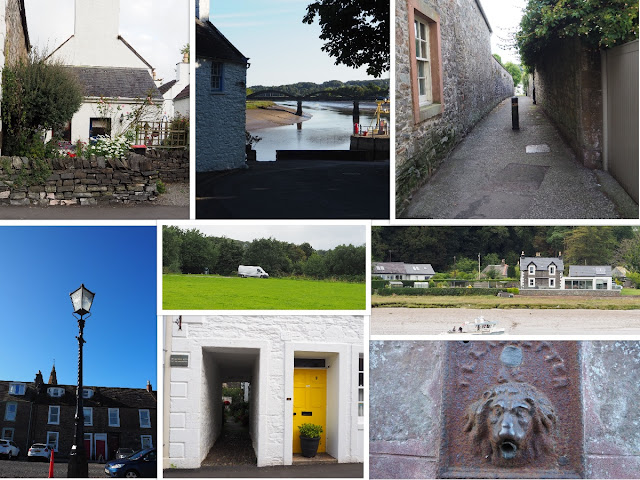 The next day, Saturday, was the evening of the town's floodlit tattoo and fireworks display celebrating the last of the summer events, so we decided in the morning to visit Cally Gardens - one on our bucket list - and we were not disappointed - I may have even come home with a plant! 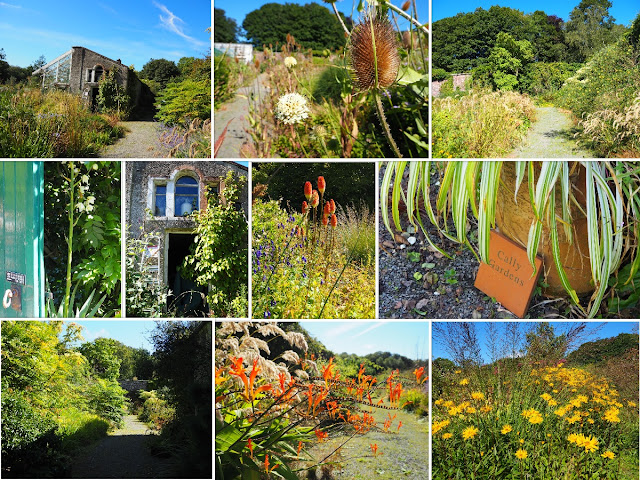 I could have spent all day there and even wanted to offer to volunteer an hour or two - however we had to get back for the tattoo and despite us purchasing tickets - we would not be guaranteed a good spot so had to make sure we got there in time. 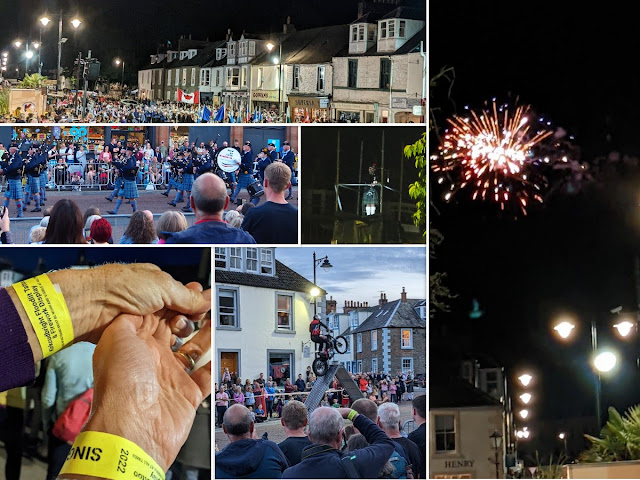 Despite all good intentions, we got there a little later than planned (dog walks are serious things says Moss - not to be shortened for anything!) However, we still had a lovely evening. We watched the teeniest wee dancers doing the Highland fling (the youngest apparently was only four!) we were 'entertained' (had enough after the first ten minutes TBH) by a motorbike stunt rider, were wowed by massed pipe bands, bored by a Canadian choir (mainly because we could not hear them), amused by the gently drunk family alongside us who joined in enthusiastically with everything. We watched Scottish country dancing, flag waving, tug 'o war and a brass band. Then as the evening wore on, the lone piper played the lament high up on scaffolding - usually up in the castle but it was being renovated then the fireworks to end the evening. We all left as the tannoy was belting out Neil Diamond's 'Sweet Caroline'  Nearly everyone joined in and sang their hearts out as they melted into the darkness and up the streets and back home - once again we have fallen in love with Kirkcudbright. 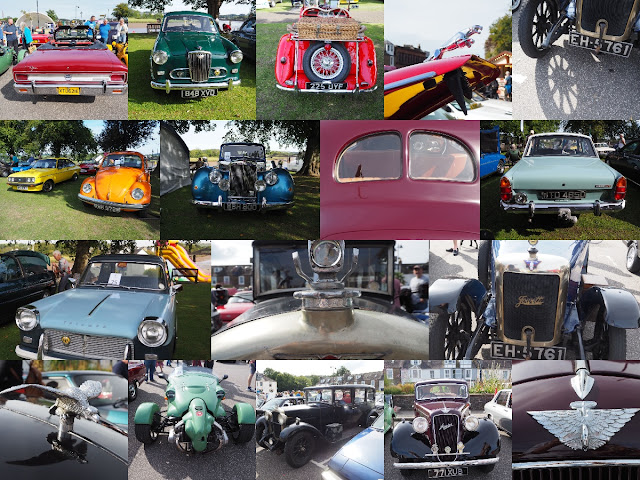 On Sunday we woke up to another bright and sunny morning and with breakfast eaten, we wandered back into the town to bumble around the vintage car rally - another of our pleasures. 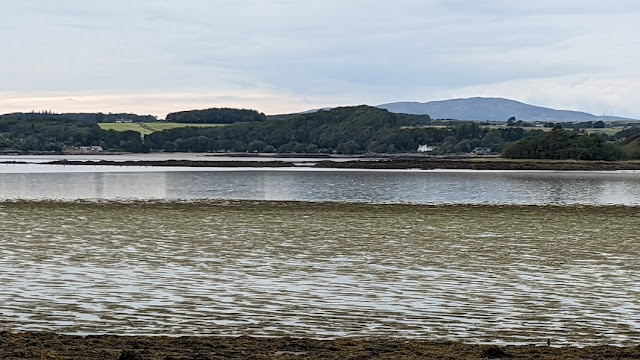 Later we moved from our site - we don't like staying longer than two nights at any one point and found ourselves another quiet spot. We we arrived there were two other vans, but by night fall one had left and the other quietly - like ourselves - just watched the stars and the tide recede. 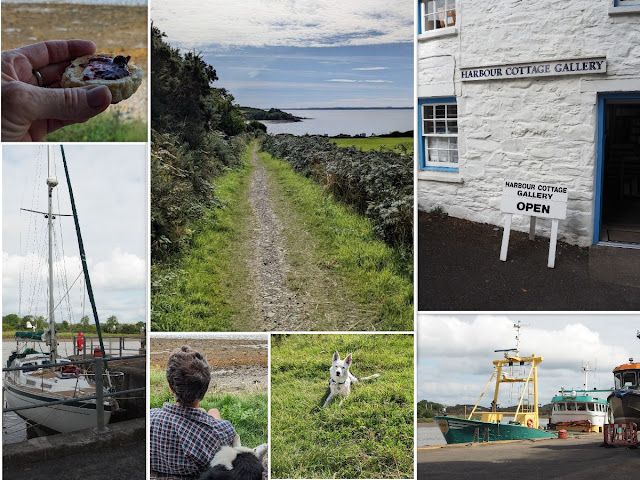 Before we left, we managed to squeeze in walking, visiting a gallery for 'The Glasgow Girls' exhibition, swimming - Moss has developed gills, and wandering - just wandering and enjoying the gentle nothingness of wandering. 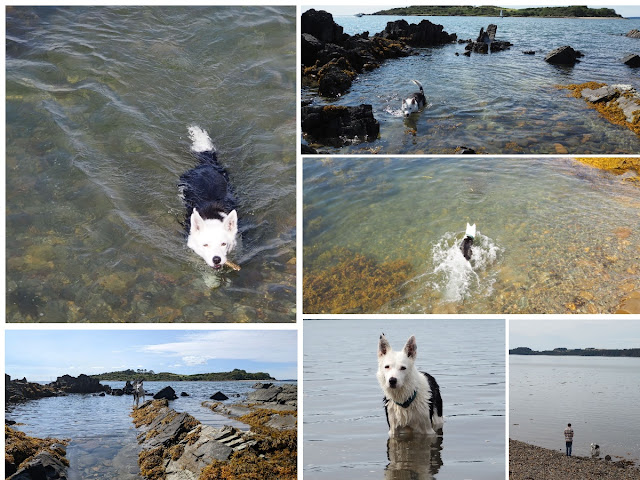