Firstly - welcome to my new followers, thank you for popping in to my little part of the world :)

Even this month's list had me scratching my head! They were inspired by my Eldest who chose words which have more than one meaning and in some cases several. So, here goes, here are my scavenger hunt interpretations for July... 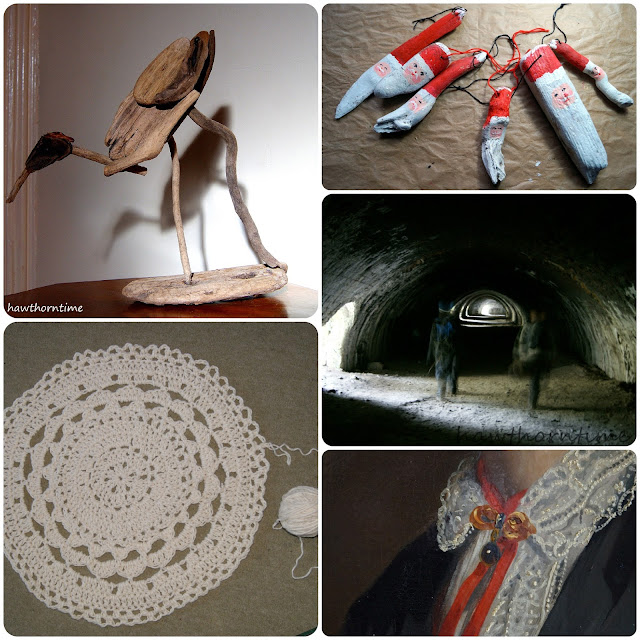 Crane
Made some years ago, from drift wood. He sat for a long time up high (due to his delicate construction) out of the reach of cats and kids (both of which have grown older and wiser) unfortunately not out of my reach .... I broke him about eight months ago when trying to tidy up. (Moral of the story - don't dust) However, his little pieces of drift wood were saved and feature in another picture.

Ring
A monster granny circle, I really fancied a large circular crochet mat and did my usual of diving in without reading the instructions. I found that after a while the flat mat began to have first little undulations then huge waves, didn't matter how many times I frogged it and reduced the number of stitches I seemed to get a wavy edge...grrrrr. It did eventually get to be about a metre and a half across by which time I'd had enough and ripped the whole thing back and returned the large balls of carpet wool to my stash cupboard.

Set
Remember my broken crane? Well, I made a set of wooden Santas from him last year. I think I prefer them like this :) You may even recognise one or two of the shapes in both images.

Light
Not far from the hamlet of Langcliffe is an amazing piece of hidden history - the Hoffman Kilns. We've been a few times and each visit never fails to impress me. You can be standing outside in brilliant sunshine and as soon as you step in you are plunged into total darkness...then as your eyes adjust - you can see stripes of light. It never ceases to amaze me. Well worth a visit.

Bow
I had planned on using the bow of a boat or a bow and arrows that the boys played with as smallies but having visited Acorn Bank (NT) Penrith and seeing that the only form of decoration in the building were two portraits which didn't even belong to the house, I had use the image of a rather dour lady with in her black garb, the only colour being a small red ribbon and a bow shaped gold coloured brooch at her throat. 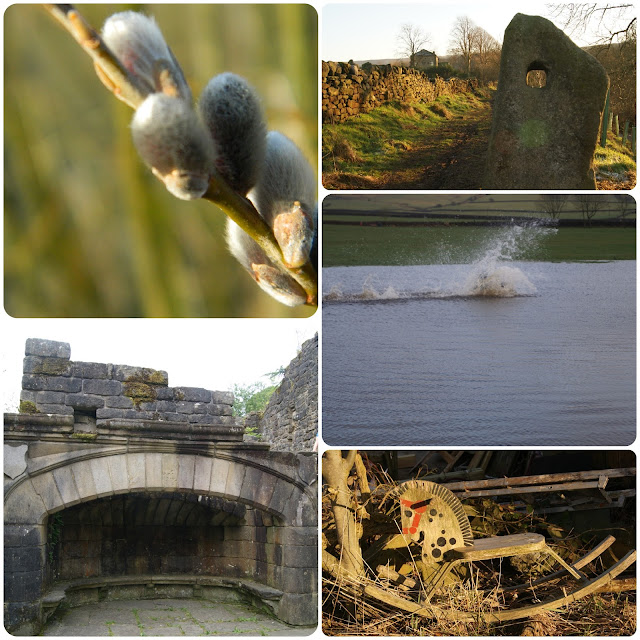 Spring
After winter, I yearn for any promise of spring coming and as soon as we see things like snowdrops or catkins, I feel a wave of relief. It is strange, I know the weather turns, I know winter ends and spring quietly replaces it, but I need to see physical evidence before I actually believe the seasons are turning!

Open
I struggled here - should I do an open door? Open jar? Open sign? In then end I opted for an 'opening'. A carved hole in a stone post that would have held a pole keeping the road closed. Without that pole, the old track is now open.

Grand
Can you image sitting besides this grand fireplace? I image (looking the the seating around the back of the hearth) that the space was not a roaring inferno filling the hall with heat but rather a smaller more modest pile of embers. The residents would probably sit around the fire toasting their toes, spurning the large and cold hall for the more intimate warmth of the grand inglenook fireplace.

Park
We don't have a park - in the traditional sense - in our village but we do have a series of open spaces. Our regular haunt is our 'rec' (recreation grounds) where Moss can play and run. It is a busy space with various events through out the year and dog walkers on a daily basis. It is a rather windy place at the top of a rounded hill with poor drainage and during the winter rains we are 'blessed' with seasonal 'lakes'. What you are looking at is Moss galloping through at full speed during last February. What you can't see is she probably has a silly grin on her face. What a nutty dog!

My own choice
When out walking, I try to capture images that are 'different' to the usual views and photographs. So when I came across this little rocking horse gently decaying forgotten in the hedge on a quiet lane alongside a field with a number of disintegrating farming implements in a state of neglect, I had to capture the image. It does make you wonder at the back story of the rocking horse... is it's owner now grown up and has no need for it, did they have with them to play on while the farmer was working in the field, has it been stashed for firewood and now lies forgotten?  Who knows.


So, there you have it, this month's words and images. I am off now to see what you lovely lot have been up to!