I am still here, still busy, still chasing my tail!

As I type this I ache - yesterday I was up in the walled garden and due to my own slapstickery - I ended up hurting myself.

If you promise not to laugh (shush - I can hear you sniggering already!) I shall tell you what happened.  Firstly, an empty compost  bay, a hammer and a stake were involved -Stop it! I can hear you chortling into your coffee - pack it in! 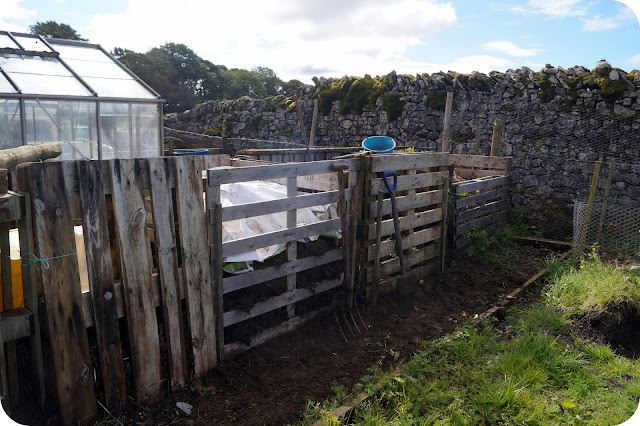 Well, let me begin from the beginning - I wanted to turn the bays before the end of the season so they could quietly compost over winter and by spring they would be all yummy and ready for the garden.

I had already started this puff-inducing-arm-stretching-and-wrist-wrapping-action the week before so there were the final two to do. I opened the front gates and started.

After the first ten minutes or so, off came the first fleece, then a bit later, well not much, the scarf was flung aside, quickly followed by a jersey ... all that was missing was a bit of stripper music.

Eventually the bay was empty, all compost moved and layered with nicely rotted (and rather smelly) straw.  I stepped back and took a breath - I certainly will need a shower by the end of the day - now to start the next bay.

Another rather puff-inducing bit of action occurred and finally finally finally I reached the bottom of the compost bay - I could hear my coffee and sandwich calling to me and I was ready to answer them. In my haste to close up the empty bay I pulled up the pallet gate and found that because it was empty, it fell into the bay. So I collected three stakes and a hammer. The first stake went in smoothly, as did the second.


I reached for the third as it fell into the bay. No problem. I lent forward,
over the pallet....
to reach the stake....
which was going to support the pallet...
the unsupported pallet.
The one I lent on.

In slow motion, the hammer, the pallet and I (cue more music except Swan Lake this time) fell forward, as one joyful synchronised unit into the compost bay.

My head hit the far side, clunking against each slat of wood (think thud..thud..thud..thud in quick succession) and I landed, with my left arm UNDER the pallet and the rest of me on TOP of the same.

For a moment I was relieved I was on my own - no one would have witnessed this act of buffoonery but then I realised I could not move!

So, with my free-and-waving-around-in-the-air-right-arm, I hauled myself up against the pallet at the back so I could get my left arm out - it was then I realised I was still holding onto the hammer.

Now, I limp - both legs, my left hand has a strange bruise, left wrist achy, tender right shoulder, right wrist and bruised ribs. A tender spot on my head and stiff neck.