Last Thursday I received a phone call from my brother in law and in hushed and hurried tones he explained that we were needed over at the in-laws on Saturday afternoon for a couple of hours as they were being filmed.
As I was at work it was a bit difficult to get more details and brother in law sounded very harried, so I promised I'd get Himself to ring back in the evening and discuss a bit better.

It turns out that there is a chrimbly tv programme called All Star Christmas Presents in which deserving people who have had a bit of a rough time are surprised by an all expense paid trip away with lots of outings and treats. They are then brought home happy, fully expecting the experience to have finished only to find that something else wonderful has happened while they were away.

In my in-laws case they had been flooded out twice over summer and then during autumn a huge fast moving mudslide poured off the hill side and filled their ground floor kitchen to a height of 1 metre.  They hadn't really recovered from the first flooding which had completely destroyed their kitchen and were temporarily cooking and eating in their lounge while they waited for the building to dry out before any repairs and decorating could begin when they were flooded out again.

Once again they had to deal with the mess and the damage and the insurance men tutting as they added up costs. Then, when everything seemed dry and ready to proceed the mud slide happened.  There had been a heavy thunderstorm high up in the hills which were completely saturated already. This caused tonnes and tonnes of thick stinking mud to rush down the hill, cross over the road and completely fill the back gardens and cellars, kitchens, sheds, garages and ruin cars, motor bikes and my father in-law's beloved caravan.

The story so far of one natural disaster after another was really getting to my mother in law, although a strong Yorkshire lass of a grandma - she was feeling the strain.

The council came round to assess the depth of the mud and the fire brigade arrived to try and wash away the mud. However, this thick black stinking stuff had blocked drains, closed roads, filled the ground floor of the in-laws and their neighbours to a depth too great to just 'wash away'.

Now, this is where the kindness of the human race comes through. Due to so many folk suffering during these floods in Hebden Bridge, there was a genuine shortage of manpower to do the physical donkey work of shifting the mud. Then one morning, when my mother in law opened the curtains to find dozens and dozens of cars parked everywhere and loads of folk jumping out. They had driven down from Edinburgh to help. They were all employees of a bank (I wish I remembered which one it was because they certainly need congratulating) who sign up an agreement that should any one need help they would go and do just that  - help.

These wonderful folk dug and shifted tonnes and tonnes of sloppy mud for hours and hours. Then the fire brigade where then able to wash the remaining mud away and clear out the mud packed drains.

Once again the insurance men came round and raised their collected eyebrows and pursed their collective tight lips and worked over calculators. Then my in-laws waited and waited and waited. They agreed that they could no longer have their kitchen on the ground floor, my despairing mother-in-law wondered how they were going to afford to convert their lounge to cope with a kitchen at one end, dining table in the middle and the lounge squashed at the other end.

Once again, the kindness of people came into play here. My in-laws were nominated by one of their neighbours (who'd also suffered during the floods and the mud slide - damaging their cars and laundry room) to receive a surprise visit as part of the television programme.

A well known tv presenter would arrive unannounced and offer to whisk them away on a three day trip of a life time. Their every move would be filmed and then shown on television as a chrimbly-time show.

Then, once out of the way enjoying the high life down in London, their kitchen and lounge would be completely redesigned and built in three days. After the break away, the in-laws would then be filmed 'meeting' their new kitchen and lounge as well as all the designers, stylists, builders, camera crew and any one else involved with the programme.

Now, this is where we come in.  The programme requires a rent-a-mob to cheer and congratulate on cue. We duly turned up ready to do what we were bidded. We were not allowed in to the house as this would ruin the surprise so we were locked out! It was freeeeeezing!! The camera crew relented and let us stand in the now destroyed kitchen which had been used as a dumping ground for the damaged furniture and white goods. 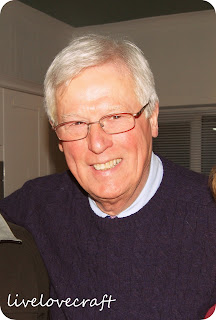 We, plus other members of the family - 12 or so folk, were chatting away, catching up and talking about all the activity when.....ONLY JOHN CRAVEN WALKED THROUGH US hur hur hur hur - JOHN CRAVEN!!!! I almost felt the need to curtsey but controlled myself at the last moment, but I did jump up and down like a five year old and squeaked a lot!! My children were almost mortified. 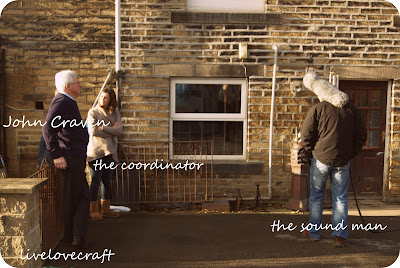 PS for non UK folk he is a TV presenter that has been a 'national treasure' for about 40 years and, I can now completely confirm, is a real gentleman.

PPS
I am overwhelmed by all your responses and requests for the blog address - thank you so so very much!