Our intention had been to stop the night at the Clatteringshaws Reservoir carpark - they allow (for a fee) overnight 'wild camping' for vans. We landed and were initially rather disappointed as the trees had grown so much the view we'd anticipated was completely screened off. Then we discovered their parking machine only took coins. We scrabbled around looking for the right sort of change, we had notes and we had plastic but not six loose pound coins.  So we sat in the van for a moment and stared at what should have been a lovely view of the reservoir and sacked off the idea of staying there the night. 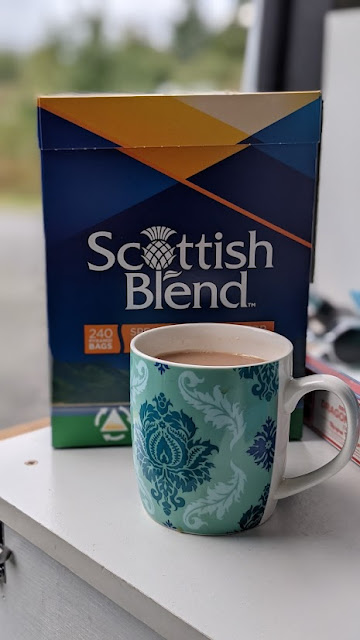 We drove off towards the Raiders' Road and took one of the lovely treed parking sites and after checking that we could stay discovered two other vans quietly tucked in the trees, so we found a space and stayed the night. We could hear the black Waters of Dee as it burbled and splashed over the rocks and as before - the trees had grown so much we could not see the river, but the site was so pleasant and as it was getting late - we settled in. The midgies tried to put us off but we have learnt that if you light an incense stick or two it keeps all but the most determined away. The other vanners (well, they were in mobile homes) must have thought that weird dope smoking hippies had landed and very quickly put up the shutters - or may be they too were hiding from the midgies (I prefer the first option - who wants to be boring haha). 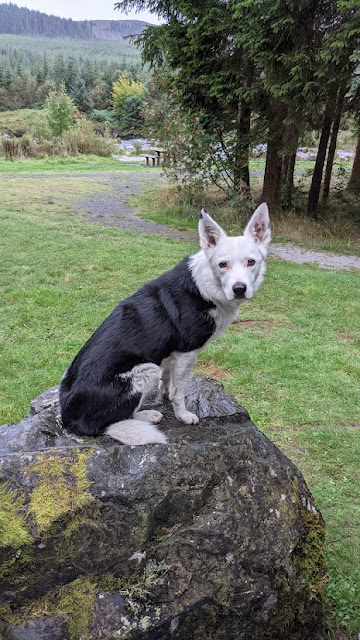 We ate as we listened to the river, watched the stars, smelt the bracken and sipped tea to the sounds of the night as they filled the air. We slept well. 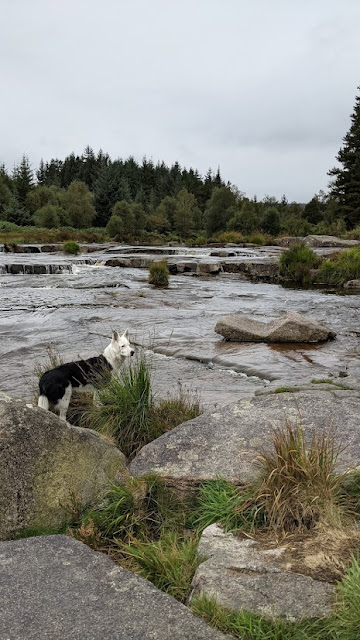 In the morning, after our mug of tea, instead of breakfast, we tidied everything away and drove off to 'Otter Pools' a favourite place of ours along the Raiders' Road. I love this road - it's ridged and rutted stony surface reminds me of the gravelly roads at home - driving through the hills of South Africa where it is just you and the trees. We chatted as we went along, reminding ourselves of previous visits - with the boys when they were 'ickum-bickum' (small). The land is forestry land so it is understandable that trees grow and are harvested and we were interested to see how much it had altered since our last visit. 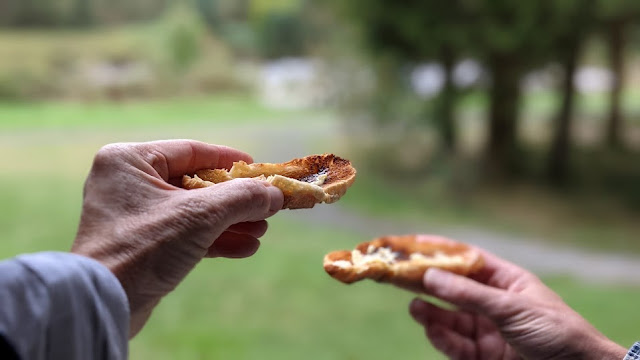 We landed at Otter Pools - and were the only ones. We made breakfast and went down to the water's edge, chose a lovely large boulder and sat munching as Moss played and swam. 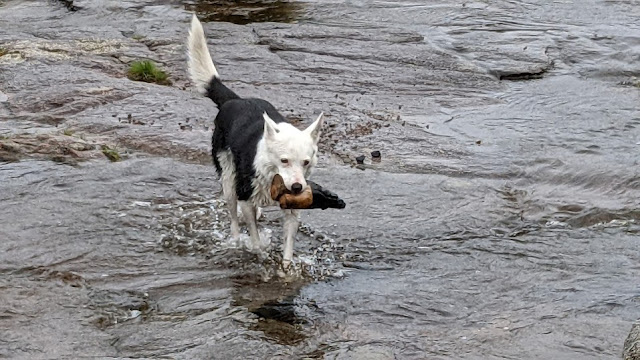 That time was so precious, again we reminisced over previous visits, boys swimming, BBQ's while battling with the midges, picnics and playing - and we wondered why we'd taken so long to return. 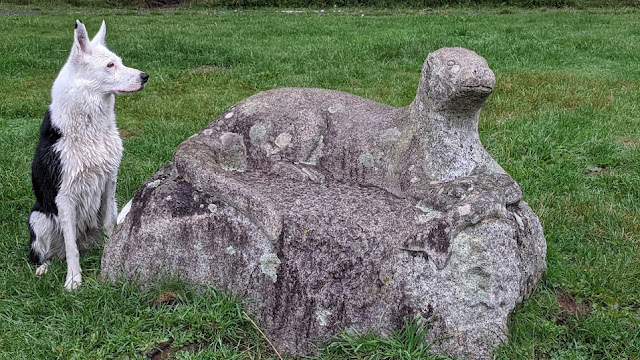 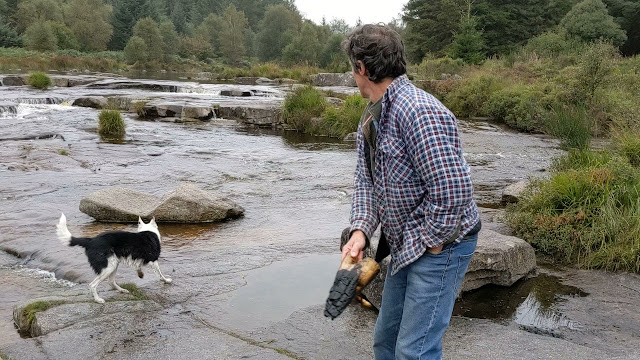 Moss was in seventh heaven and could not believe such a wonderful place existed, she really did not want to leave but when the rain that had been threatening most of the morning decided to actually tipple down, we ran back to the van, she was most put out. A brisk towelling down, wrapping her up then placating with a biscuit did go a little way to help matters but she still stared and stared towards the pools where she had just spent a very happy half hour. 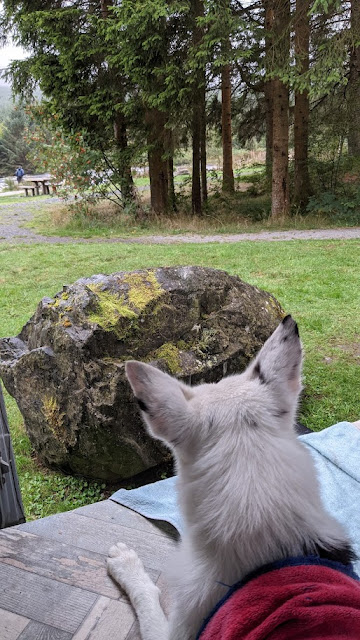 We carried on the road, rattling along happily and all too soon the 10 miles of gravel road had finished, we then turned right towards Kircudbright - one of my all time favouritistststst towns in the world. One day when I grow up I will live there (in my dreams!) 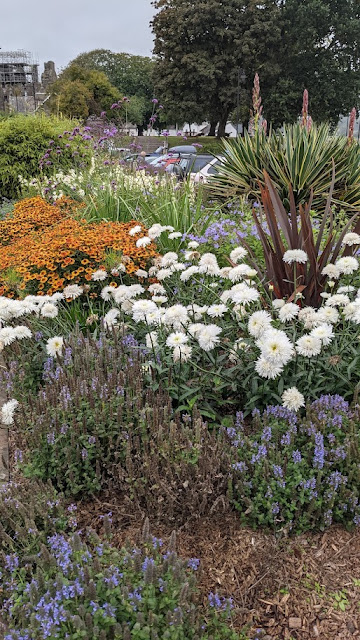 We had a wander around, bought ourselves some provisions for lunch then set off for Kircudbright Bay (also known as Dhoon Bay) where in the sands is a wreck with just it's ribs sticking up looking like a whale carcase. 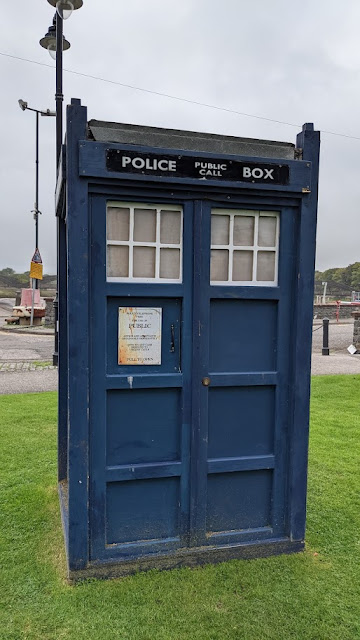 To help Moss get over the dashed holiday romance she'd had with Otter Pools, we let her play on the sands - she soon recovered and had a lovely run around. The tide was a long way out, too far really for a dog dip so we returned to the grassy picnic field and set ourselves up for lunch. 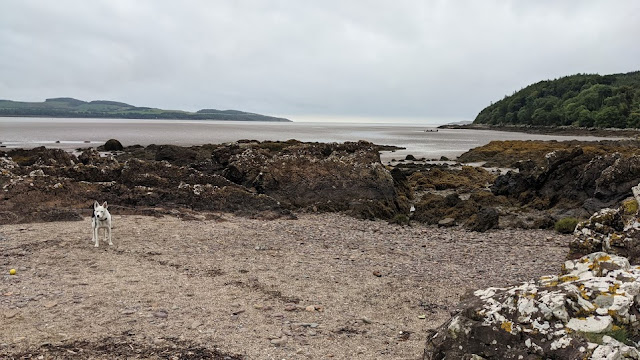 While we ate, we watched the tide creep in as it filled in the bay. We lingered as long as we could - not wanting our micro-adventure to end, but we had to drive home - the next day was a 'back to work day'. 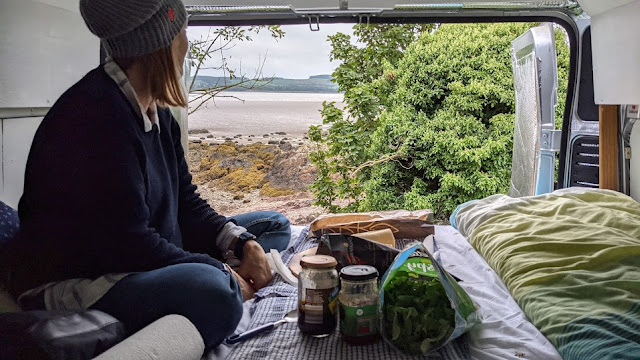 Did we enjoy ourselves? Oh beyond our expectations - we know and love the area and having not been for a few years it was so refreshing to revisit memories and places and find new ones too. 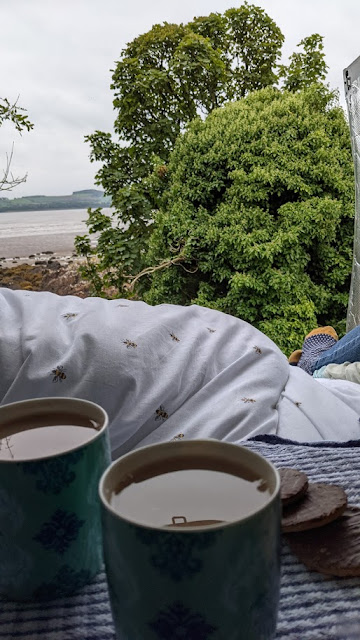 I know that we will return (and I'll let you know GZ when that is) sometime soon. I need to top up my sea and sky levels, they have been sorely neglected💙
at September 19, 2021