After our early start on Sunday morning, we packed a morning picnic of tea and Sunny Street flapjacks and drove to the nearby hill of Criffel. 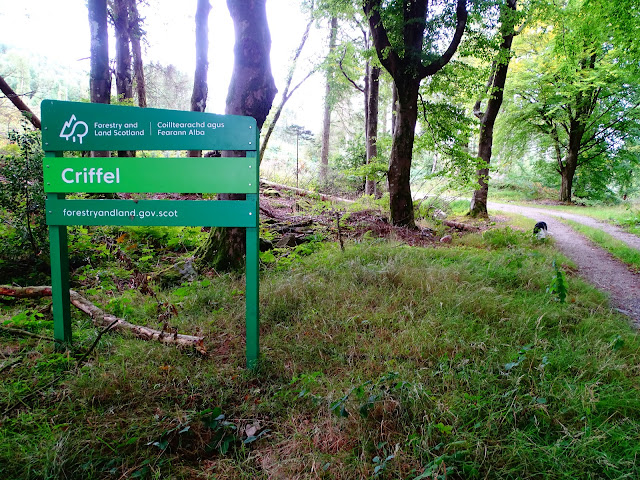 It is a bit of an upside down 'pudding bowl' shaped hill and I did express my misgivings to Himself - not so much the going up but the coming down with my dodgy knee...... he avoided eye contact and cheerfully pronounced that 'it would be fine' as he'd found a route that was not too steep (famous last words ...) As an almost afterthought, I dug out my old walking poles lurking at the back of the van and shoved them into my haversac.
Any hoo - our walk started near a rather pretty but empty farm house and we did our usual 'wouldn't that be lovely when restored to it's former glory', we often 'do up' houses in our heads while we are walking and this little hoos and garden were certainly worth fantasising about (it was only afterwards I realised I'd not taken any photographs which is a shame). 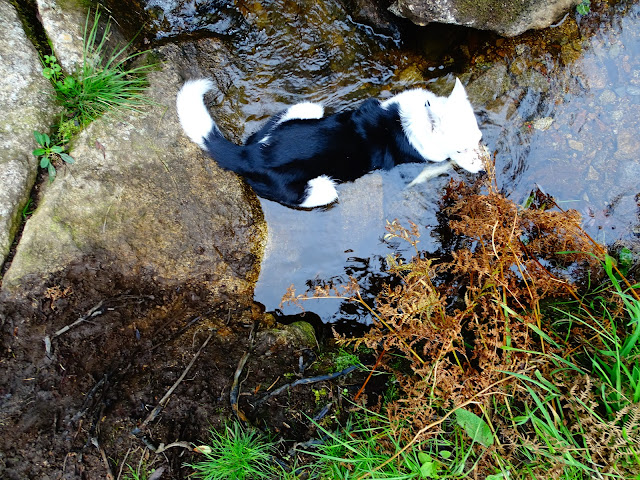 We left the farmlands and turned up into the woodland and followed the forestry track. It was a lovely wide stony path with glimpses of far distant views between the stands of trees. After a little while we found a cheerful babbling stream that tumbled down over the rocks towards the valley bottom. By this time we'd all warmed up a little and Moss threw herself into the chilly water with such enthusiasm it was hard not to laugh at her.
We continued along, the track becoming a single width path which became increasingly steep. The path was in excellent condition having had lots of work done on it. However there were many 'flights' of stone steps and my knees soon made it known that they were getting tired. However, while we were in the trees it was impossible to see how much further/higher we had to go until we burst out on to the moorland and I realised we'd not even got half way up yet...... (at this point I was beginning to have little spiky thoughts about divorcing husbands and throwing my walking boots in his direction) Himself noticed and quickly cracked open the flask and made me a small mug of tea - this went some way to calm some of those murderous thoughts! 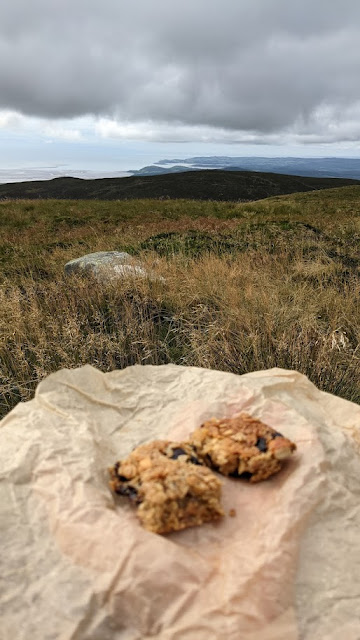 We reached the crest of the hill finally and found a little rocky outcrop where we unwrapped the flapjacks and quietly sipped on tea. The view was spectacular, Criffel hill is a bit of a lump ( ok ok a bit of a large lump) with 360 degree views and we spent a little while appreciating them. 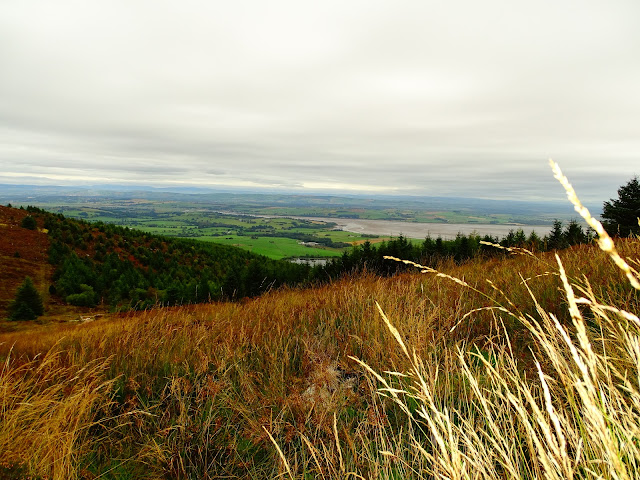 Initially the return path was gentle and the views rewarding, Moss happily rolled in the moorland grasses and we were delighted when we could see the tidal slip and ravines play out on the mudflats. 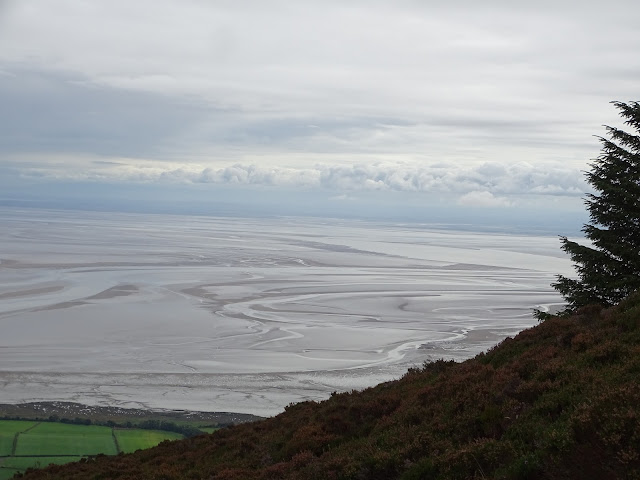 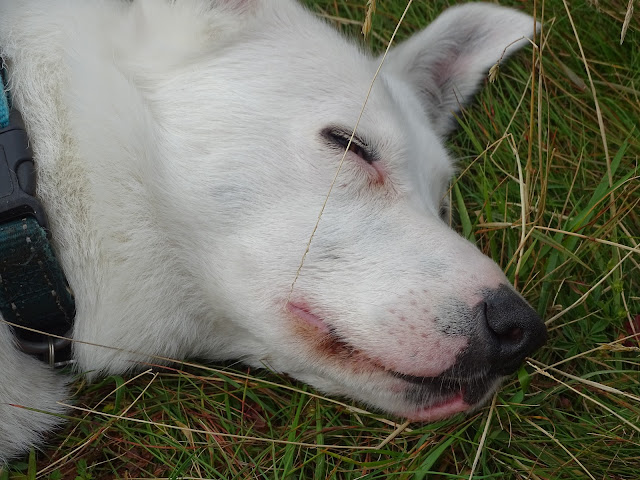 Then..... after being deceived by the gentleness of the col between Criffel and the next hill, the descent just dropped away below us and there was no other way of getting down than by just gritting teeth and getting on with it. It was then I pulled out my poles - I was so glad I had remembered them. 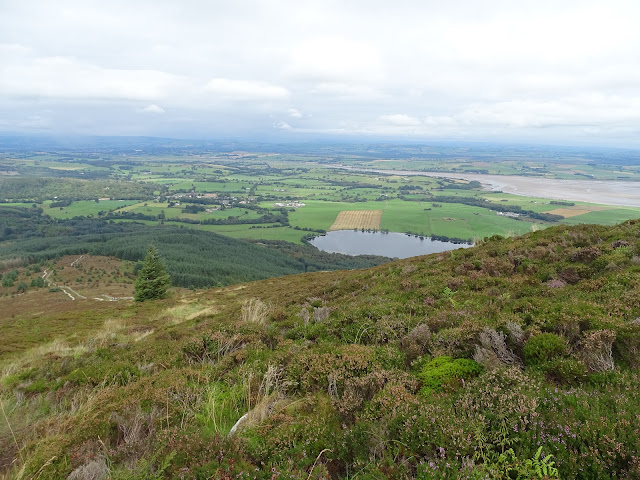 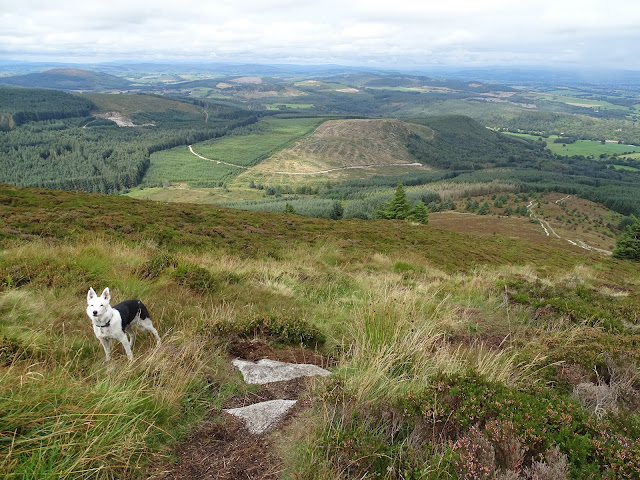 The above photo was the last I took from the hill and no more were taken until we'd reached the valley bottom - and as I hung myself over a gate to recover - this rather large and curious cow wandered over to say hello.  She had such beautiful brown eyes it made me reach for my cellphone to take her picture. 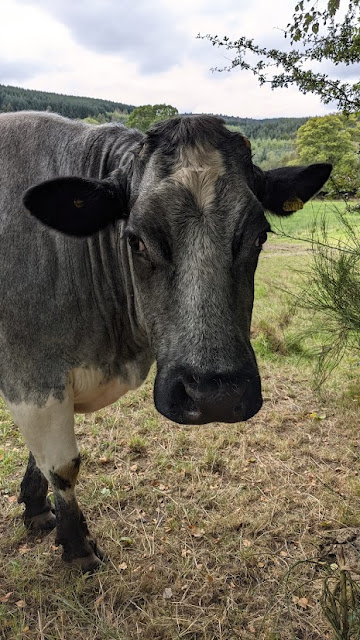 Having 'broken the photo drought' I reverted back to my camera and took the below view towards to two hills we'd just come down off. We stumbled (well I did) our way towards the barn, into the trees and rejoined the track towards the van, five hours after we'd left it. 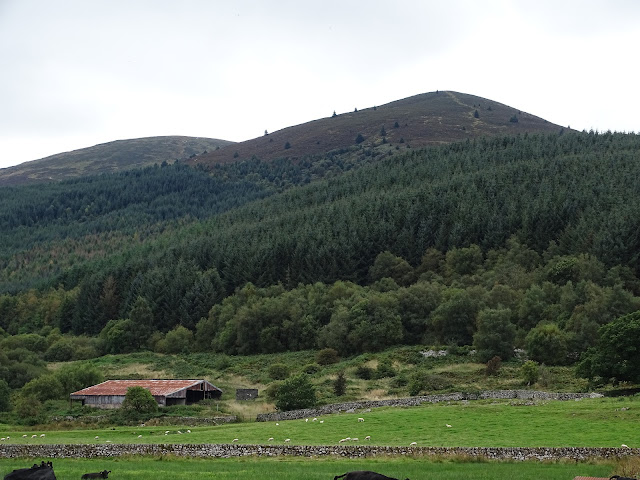 Himself did the best thing he could have in the situation - sat me down, put the kettle on and found some ibuprofens for my knee ..... I have since forgiven him, but I did vow and will certainly keep my promise that hills are no longer on my 'can do' list. It's not the going up, it is the coming back down.
The next thing he did - which certainly made up for it all (I do love him - I promise) - he drove us down to the coastal village of Carsethorn and there Moss and I (and probably Himself) soaked up the salty air and gently lazy lapping of the sea and felt a whole lot better. 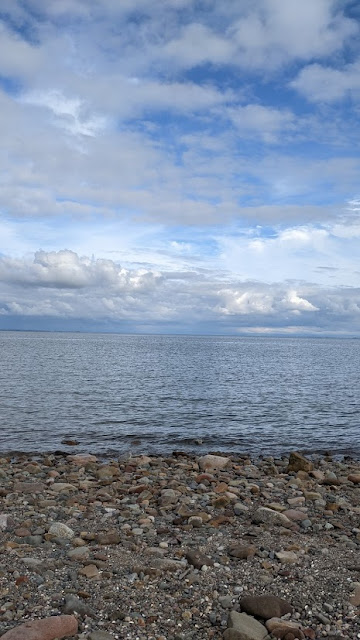 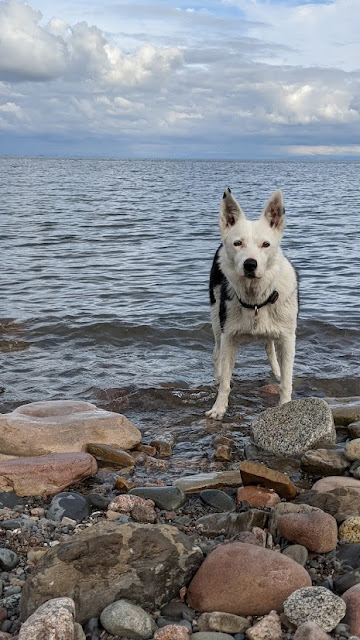 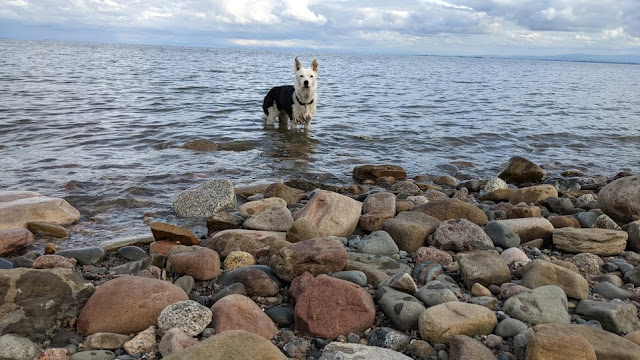 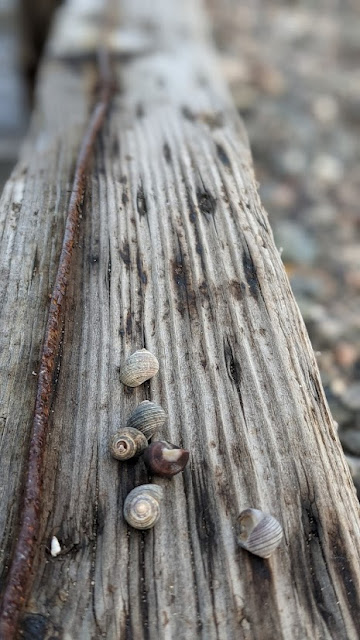 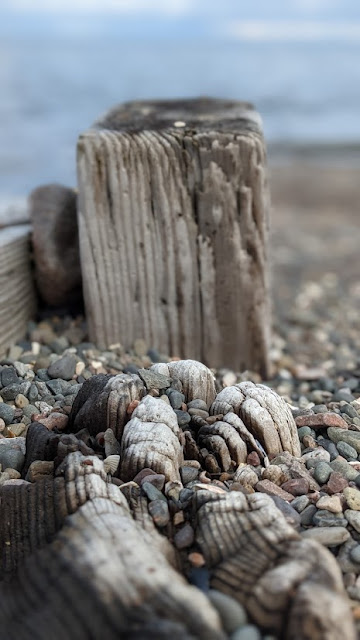 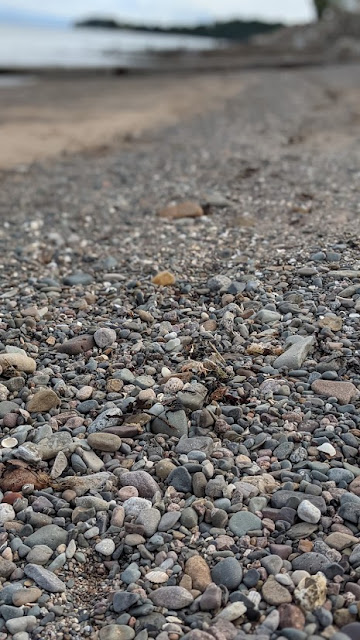 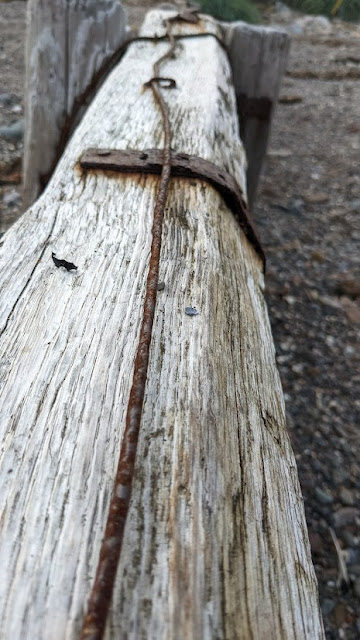 Then we hopped back into Zeb and trundled off to our second evening stop, travelling through rolling hills and farmland until we reached Clatteringshaws Reservoir.
To be continued ....
at September 16, 2021