As I type this, I can hear the rain is persistently patter down on the roof, Himself is about to light the fire and the dog is finishing her bowl of food. All gentle sounds and sights of normality. Granted it is summer and should be warm enough not to need the woodburner on...

I did have plans for this weekend but as usual life got in the way, but it was still a gentle and cathartic couple of days.

Saturday started a little earlier than usual, Moss and I were up at 5am. Now, I am most definitely not an early bird so dragging myself out of a warm and comfy bed at that time was quite a trial It was for a very good reason though.

We were meeting a dear friend who acts as a 'dog-nanny' and I wanted Moss to meet and approve of her. My friend is such a sweetie and dogs do just warm to her and I have no doubts that Moss would be in good hands, I just had to make sure Moss felt safe, I needn't have worried. They hit it off immediately and Moss and her 'new best friends in the world' (My friend walks a small but busy pack of dogs first thing .... hence the 5am start...) raced around and played for over an hour while we chatted. She also does a 9am dog walk and for any dogs that need an all-day-nanny - she takes them under her wing and takes them home - just what we need for our dear little scatty soul.

Not surprisingly I was shattered ... I may have mentioned my inability to get up early and survive ... couple that with doing the week's shopping, then gardening, still suffering the after effects of my grotty cold, then over indulging myself on all things 'Glasto' on the television and radio meant by Sunday I was a wreck! 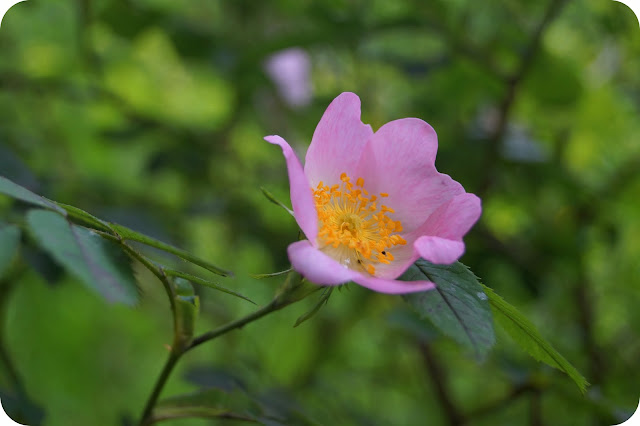 I needed some 'wild air' to help clear my head.
Miss Moss, Eldest and I had already gone for a DoG WaLK earlier in the day, met and chatted to a number of other walkers from the village, but it had not quenched my need for proper 'air'. Again, life aspired against a decent walk out so by the afternoon I announced that I wanted to walk through flowery meadows and I WaNTeD to GO NoW!

Himself leapt up from his Sunday stupor (he was studying maps) Eldest jumped straight into his wellies (his favourite footwear at the moment ... says something about our summer weather!) Moss was ready (she was born ready) for her walk. Youngest declined - he has one last exam tomorrow and he was making sure he was ready. 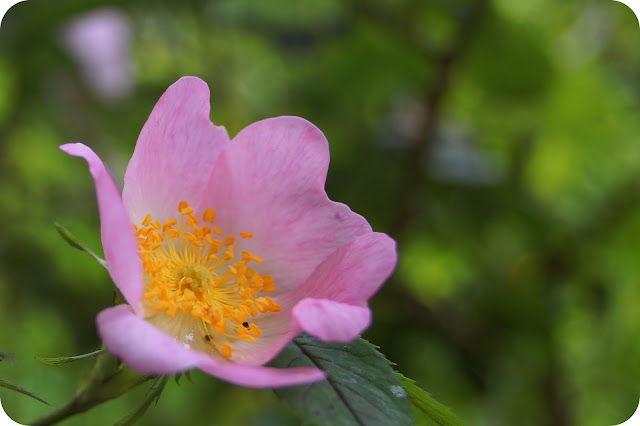 We turned right at the first footpath sign after our house, down a secret stone lined lane which winds its way alongside a small duckling filled beck. 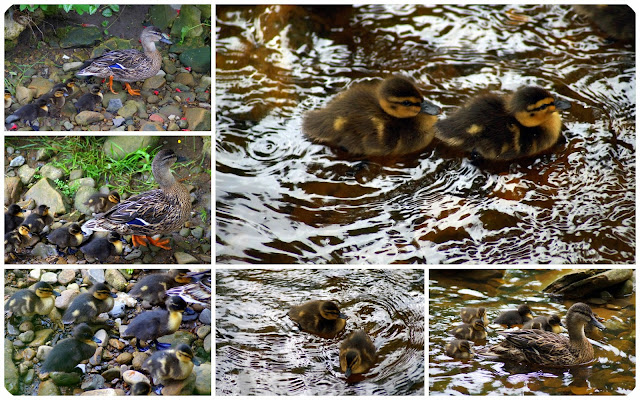 Moss was allowed to wallow once we were away from two mother mallards and their collective broods of nine and seven. She does so love water. We left the stream and turned upwards into a grassy meadow, filled with wild flowers and ... cows and calves. We did not linger long, choosing a cracking pace we exited the field as soon as sensibly we could. 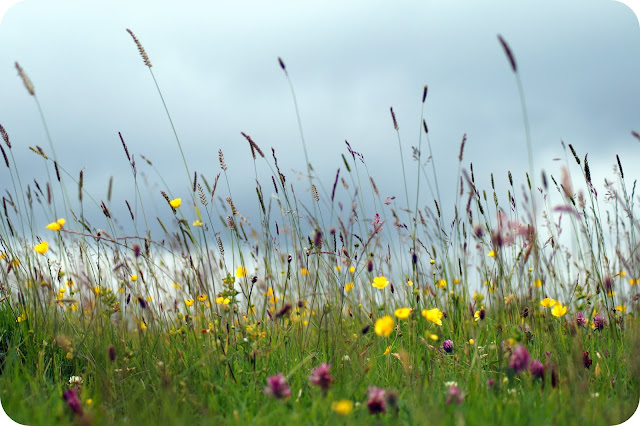 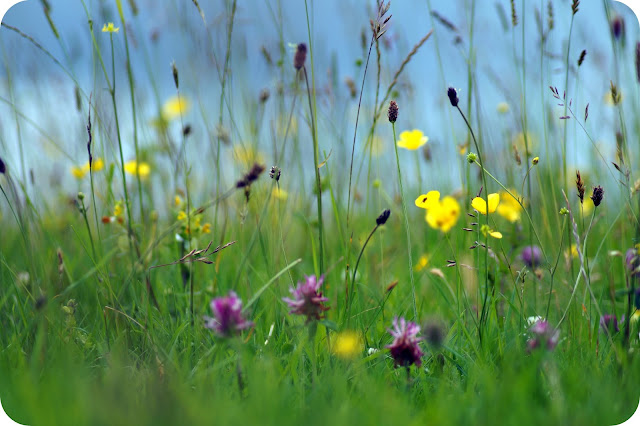 We even spotted a 'greater-snoozing-clipped-texel-ram' among the flowers, hehehehehe! 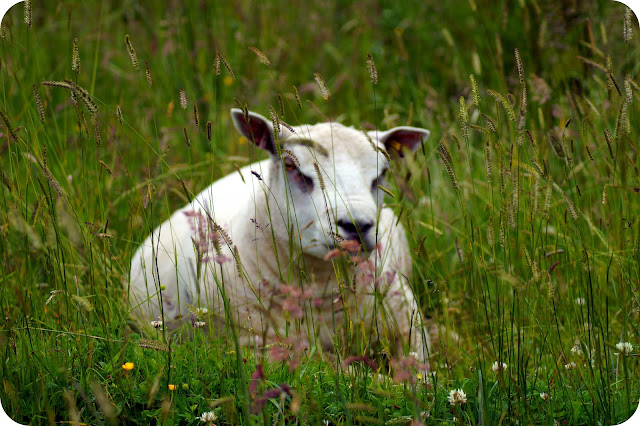 Our walk continued upward and the breeze certainly felt chillier and the skies definitely looked a little menacing. 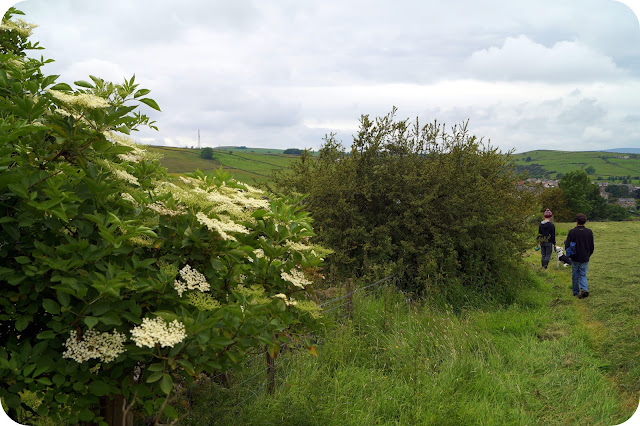 We walked alongside huge fields that had just been mown for hay, the smell was heavenly - a sweet mix of grasses, chamomile, clovers and other field herbs. I love that scent. 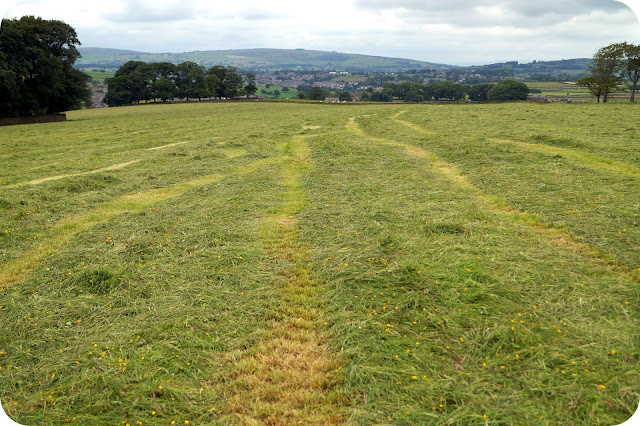 The elder trees are heavily in flower at the moment, may be I should make some elder flower cordial? At one point, a sweetly fragranced pale pink dog rose had scrambled through an elder. Sublime arrangement by nature :) 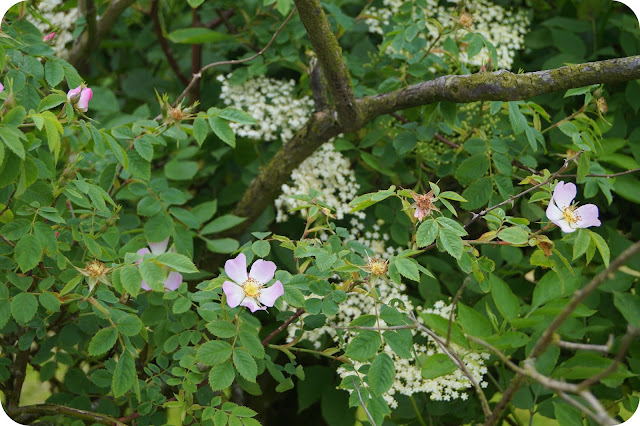 It was time to turn back home, I'd promised the boys scones once we'd returned and this made them quicken their pace. We'd not been home long when it started to rain - perfect timing. Now, scones baked and eaten and the rain looks to have set in, I am glad we managed to get out and get some 'wild air'.

Hope you had a lovely weekend,
and hope you have a good and positive week  ≧◠◡◠≦
xxxxxxx