S'funny how sometimes you feel cold and find it difficult to shake it off despite being busy or layering on the clothing, well it was one of those days today, where I felt chilled to the bone for most of it.  Any hoo - I was busy all day (working outside) and when finally I returned home and got out of my gardening gear, put on the kettle, got myself ensconced next to the fire with the plan of gently warming up, when there was a tap at the door - the tree surgeon had landed to check out a tree in our garden.
We have several indigenous trees which we have planted and a HUGE and ugly conifer we inherited with the garden. This particular tree has dominated our outdoor space in an increasingly unfriendly manner. Sapping all moisture out of the soil, dropping needles and souring the pond and acidifying the soil. However, it's greatest sin is the amount of sky and sun it greedily takes up. Our dislike of it has grown over the years as the tree itself has grown, then last year it had a sudden growth spurt and became even more unsociable ... time for it to go we agreed. We had to wait for the squirrels to leave before we could do anything too drastic and seeing there appears to be no birds nesting in it we decided ... it is now or never!
Any way, where this was leading t,o was, I had just changed out of my work gear for softer trousers and clean top and jumper when the tree surgeon landed and needed to see the offending tree. He is a pleasant chap, we've known him for years however as it has been for most people, we've not seen each other to chat to for over 12 months so there was a lot of catching up of family news. We stood at a goodly distance and asked about each other's families - as you do - and I had to clench my teeth to stop them from chattering. I could barely contain the shivering and as soon as he left I made a beeline for the fire and my tea. I felt frozen!
I knew I needed a satisfying evening meal to help warm me up and I thought it would be a good way to try another new-to-me recipe.
Oh be still my beating heart and happy taste buds - it WaS AbSoLuTeLy DeLiCioUs!!!
We had ... 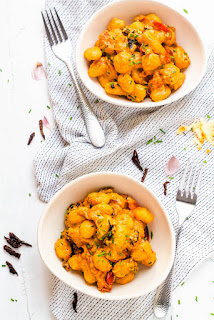 Image from recipe website
Gnocchi with smoky tomato Sauce.
And, as usual, I amended it to suit our palates. So, no cream - I used a touch of milk instead and added red pepper as there was one needing eating up. I served it with roast sweet potato and parsnips and a half a naan bread and it was wolfed down in record time.
So,
Would I do it again? : oh yes!
Any changes? Only the ones I have mentioned, the added red pepper and the replacement of cream with milk and instead of the smoked cheese as they suggested, I just used standard mature chedder (using what we had to hand) - it was still very very yum! 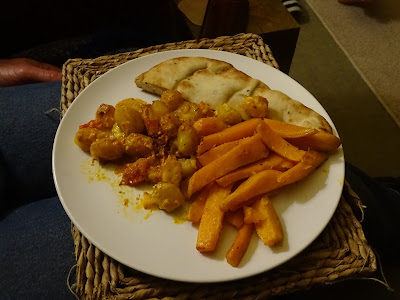 Himself's plate - he'd already started when I realised I should have taken a photo so he was stopped mid-mouthful! (cue grumbles haha)
My only gripe and it is a minor one - the combination of the gnocchi, roast tomatoes and sweet potatoes, the plate was a predominately orange one, but the flavours soon blew that gripe out of the water!
But most importantly - I am now warm for the first time today🥰  aaaaaaah bliss.
52 New Recipes Challenge
#52newrecipeschallenge
at March 02, 2021