It's that time of the year when I countdown throughout December toward the end of the year.
I usually have some sort of waffle and a photo or two to go with it - come along, let me take you along for the ride!

We had been out walking on the hills and had dropped down into the village of Kettlewell. It is a quirky village that I have written about before. In summer it is a heaving sea of holiday makers, day trippers and walkers but add a little inclement weather and the village returns to a quiet rural clutch of houses nestled in small steep sided valleys.  We try to avoid the massing throngs and choose to walk during the quieter cooler seasons.

These pictures were taken on one such walk. We came down the lane and we were mobbed by a small but delightful pack of border collie puppies. They wobbled on furry baby legs up the farm track all bright eyed and floppy eared.

A piercing whistle and a farmery voice called  'c'mon...c'mon'.

Instantly they stopped in their tracks, at such a young age they were already tuned in. A young farm-chappie strode up and scooped up several of the pups, while their mother rounded up the rest and between them they took their precious furry cargo back into the safety of the farm yard.

We were delighted and my heart squeezed at the super cuteness of them all. 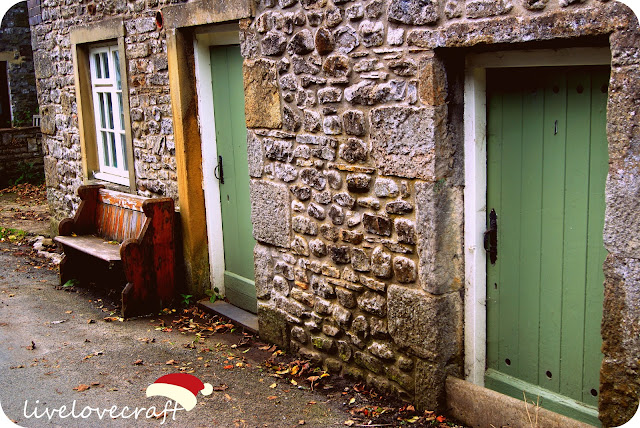 We walked on, following the lane into the village itself then out the other side when I realised I had not taken one single photo of this little snippet of farm life. Oh well, our collective memory will keep the images safe.

And to help get you (and me) into a more festive frame of mind - how about popping over and listening to -
Fairy Tale in New York, a real non chrimbly chrimbly song!