A short while ago, a farm - not a big one, on the outskirts of the village, was sold when the elderly owners retired. The new owners, quick to see profit in converting all the barns into desirable and definitely NOT affordable housing almost immediately started building.

The large barn very soon became two rather expensive houses with 'land' attached. The grounds - still zoned as agricultural can not be gardened and as such are just self grandiositising - creating the image of landed gentry. The dwellings, unsurprisingly remained unsold for quite a while with one suddenly being purchased. With in a couple of weeks, some rather pretty hens appeared and were given free range of the property and were soon followed by three 'micro-ponies' - I suspect they are Falabella - (since typing this - three more have turned up, now they have six 'micro-ponies' keeping the lawn short). Ranch fencing and mini stables were erected a bit later.  The second property remains unsold - probably not helped by the present lock down conditions however what has happened whilst the world has 'stopped'.... nature is taking back what is hers.

The surrounding land is damp, filled with reeds and tufty grass and the original owners used to regularly mow, spray, drain the land and fill it with sheep. Now, having been fallow for about a year - it is full of long purple moor grass, reeds, buttercups, daisies and various damp weedy naturalised plants. The bird life seems more vibrant, bees and hover flies abound as do dragon flies and butterflies. 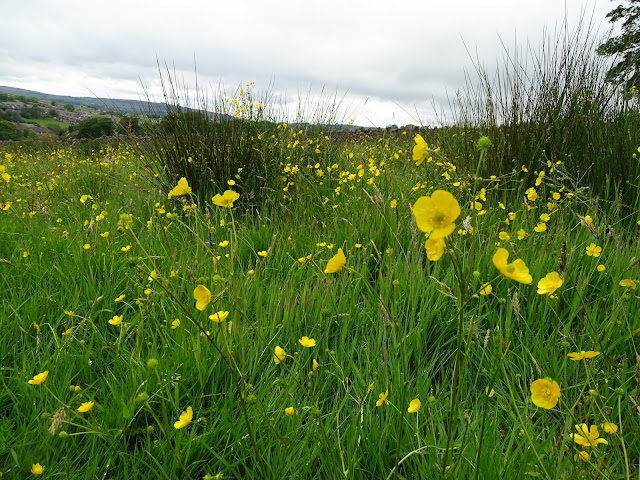 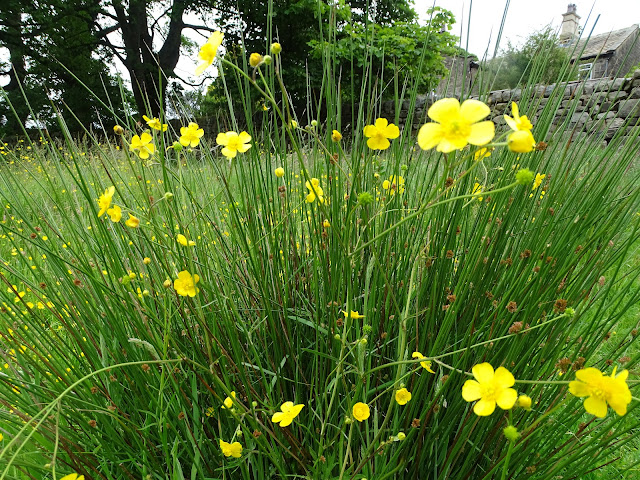 It has a joyous exuberant feel to the space
full of hope and optimism.

I hope the eventual new owner sees the value of the wildness
and keeps it that way.
Sadly, I suspect not.