Tree - before - the alternative advent 15

Last Sunday, just before the snow, Himself went out into the garden to collect Treebeard.. 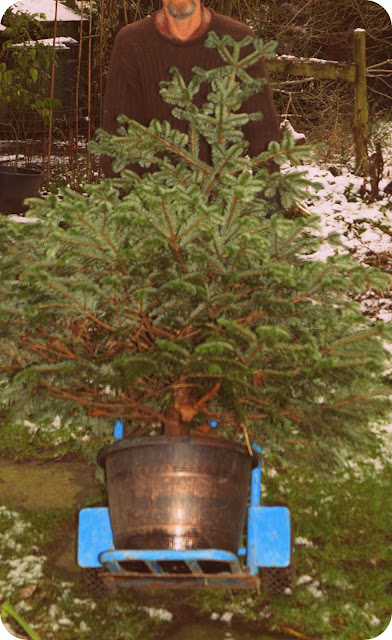 Yes, our chrimbly tree has a name and like everything in our lives,
a story too.

A few years ago our artificial tree (purchased over a decade ago) finally stopped looking good and was needing more than the usual primping and tending to make it look acceptable.  I had been hankering after a real tree for a while but had been put off by the price and the inner-frugal-me kept saying that the artificial tree would last another year, would last another year, would last another year, when one evening Eldest and I went to our local supermarket. Outside in the cold and wrapped up tightly was a crate of trees. I stopped and looked at them - they were both affordable and some were even marked down.  I hesitated, so Eldest went over and investigated. So I followed - as you do.... 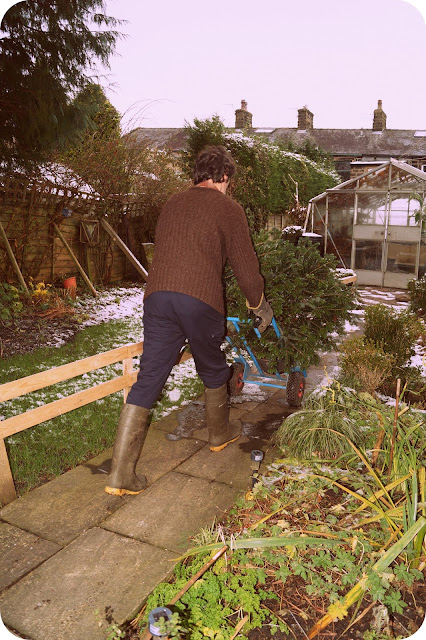 Well,to shorten a longish and not very riveting story, we brought one home and in keeping with our ethos, it was the smallest, wonkiest and rather misshapen tree with branches missing - coz we both saw it needed a home and love.

Now, several years later, with the help of judicial pruning, garden twine to train branches, Treebeard is beautiful and he graces our home with his presence and pervades our nostrils with his delicious scent during December while he wears his festive finery with such grace and gravitas.

Then, once he has done his festive duty, he is released back into the garden to frolic with the other trees that also reside there. He soon takes up his outside responsibilities - to act as a decoy for the cats, to catch cherry blossom in spring,bird feathers in early summer and leaves in autumn.

He is a happy tree and we love him :)