This morning seemed rather dark when we got up. Such a stark contrast to our last few days we'd enjoyed up in the lakes. Waking to sunshine and warmth every morning. 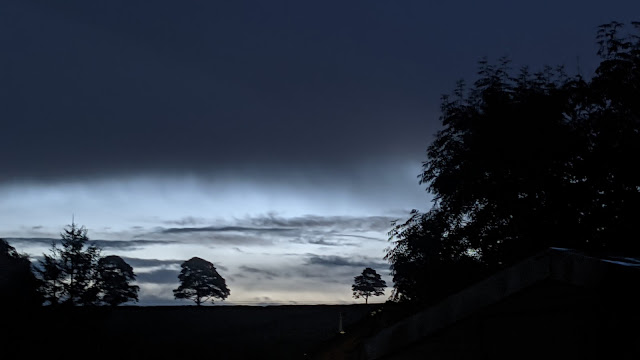 We do live in a particularly damp area - one specifically chosen by the woollen and cotton mill industry all those years ago. The damp air helped prevent static build up in the textile mills reducing splitting threads in the weaving looms.
Being situated in the lea of the Pennines, a more or less continuous hilly and mountainous range which runs up the centre of northern England, splitting it into two halves, does mean we do 'benefit' from a goodly dose of rain and cloud on a regular basis. The collective name - Pennines - used to describe this range is considered to be fairly 'modern' from the 18th century as is thought to have been influenced by the 'Apennine' range which runs north to south in Italy. However, locally 'Pen' means hill or head and as most of our place names have Norse or Anglo-Saxon origins -  who knows?
However, it does make you appreciate the good days🌞 and definitely makes you get out and do something nice when you get them!🐾
And the photo?  Taken about a week ago from our back door looking over the fields. Today's sky has no definition, no discerning edge or beginning. It is more of a dull grey duvet which has slumped over our valley today.
Any hoo, enough waffling, I have to get ready for work - have a lovely Tuesday 😊🍁🐾
#blogtober2021
at October 12, 2021