Rain☔ stopped play - well, outdoor play. Watching the weather report last night, I decided that it looked like I would be stuck at home so I might as well use the opportunity to paint 🎨the bathroom🛁
By 9am (when I should be already in the throes of working) the weather was throwing a temper tantrum with rain lashing against the windows and leaves being ripped off and hurled around. Curling my fingers around my second brew, I knew I'd made the correct decision and with an air of determination I started to carry all the painting paraphernalia upstairs.
As I did so, I wondered why I'd left it so long since the room was last decorated..... hmmm. 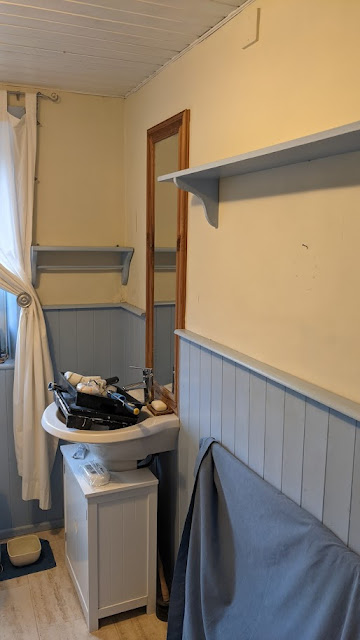 Any hoo, I started to remove all the plants and pictures, revealing grubby places where spiders had lived and left and dust had moved in. Then all the bottles of shampoo, conditioner and bath salts were placed in boxes - we have more than necessary as Youngest and GF leave a stash here for when they stay. 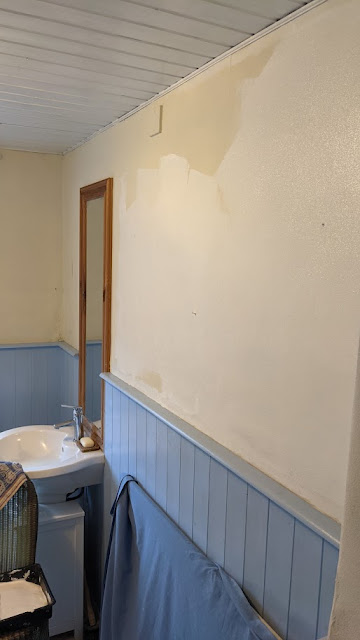 Shells and bottles filled with pebbles - holiday memories, a china 'beach hut', pictures and a vintage glass owl lamp were taken down and boxed. Then the towel rail and towels were stored in the spare room.
With the bathroom virtually empty bar the curtain, a chair, the bath mat and dustbin, I started removing the shelves. Ah - no screwdriver .... I looked outside at the monsoon weather and decided against dashing out to the garage. So I rummaged around in my work rucksack and found a multitool. Despite it's apparent ability to magically transform to anything I wanted it to be - it was not a very good assistant and I found myself going downstairs to stick the kettle on for a bit of encouragement. Armed with a mug of steaming tea I tried again and by the powerful magic of swearing - the screws relinquished their tight hold and I finally removed three lots of shelving.
Urgh - two of the shelves are above head height and their upper layers were rather grimy - shame on me😕.  A quick slug of tea for courage for the next stage, I started draping sheets over the basin, radiator and and floor, I felt like I was back in control and actually looked like I knew what I was doing (erhmm..... the jury is out on that decision) My inner self suggested I mask off the wooden panelling with tape but I soon brushed (ha) that silly idea away - it would mean having to go back downstairs again. pah. 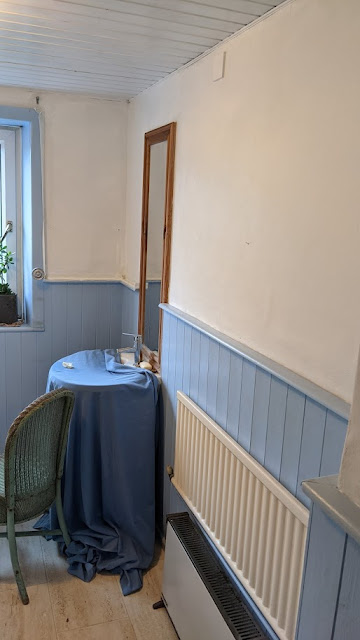 A quick wrestle with the roller - it was a bit loose and the handle was rattling a little (my slightly more sensible inner me had suggested I use the new roller but the confident nay brash outer me said no). Paint was poured into the pan and I ceremonially dunked the roller into the paint, rolled it around a bit, still looking like I knew what I was doing when .... uh oh - I need to 'cut in' (that is when you paint around the edges with a slender paintbrush). So I carefully lowered the laden roller, scrabbled around for the new paintbrush and tore off it's cover. Dipped that in the paint and with a flourish promptly flicked paint down my shirt and jeans, across the floor (where there was no dust sheet - why??) and on the wooden skirting board.
After clearing that up, I tried again. The paintbrush both new and rather enthusiastic (or was that me) meant that I kept having to wipe off surplus splodges from the wooden panelling. My enthusiasm waning, after I wiped for the forth or fifth time despite my now careful strokes, made me stop and think. So I went off to look for a piece of cardboard I could rest on the panelling and would stop me accidently splodging paint on it. This only succeeded in making a cardboardy mess and I was getting rather annoyed with it all. 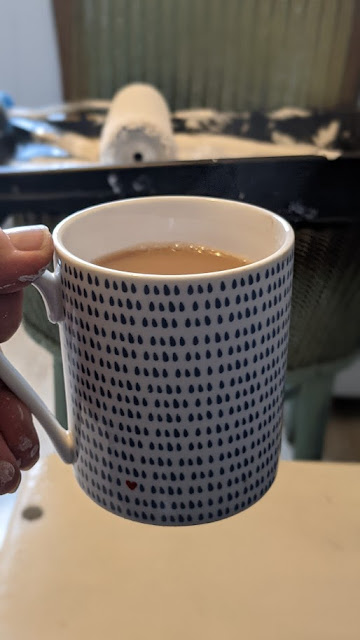 My slightly more grown up inside self said in a rather smug way - go and get the masking tape and tape off the bits that dont need painting .... like you were told to do earlier.....
Several minutes later, a drained tea mug, a grumble or two - I'd masked off the side I was about to paint. I picked up the paintbrush, reloaded it and started to work around the edges again. When (that dratted inner nuisance said ... you bought a mini roller to do the edges last night, had you forgotten?)
Gritting my teeth and mentally ignoring the smug voice replaced the paintbrush back in the tray and went to find my new mini roller I had specially bought for this very thing...... ripping it's cover off was more like trying to tear a telephone directory in half but I succeeded eventually. A quick rolling in the paint and then applying said paint in the corners and along the edges suddenly made me feel very happy. It made such a lovely slooshing-slapping-sticky-paint-going-on-to-the-wall noise that I didn't mind all the pfaff leading up to this point.
Then for a little while, things were going well although I did have to resort to changing the old roller for the new one - my inner voice never said a word but I knew it was feeling rather pleased with itself ... again..     I began to congratulate myself, omitting the gaffs and rookie errors I had made.  THEN I stepped into the bowl of water for the cat. It is a large bowl... For the cat... On the floor... It was full... of water.
Argh!
I stepped out of my soggy slipper, pulled off a dripping sock, hopped out of the bathroom, dried my foot and stomped downstairs.  The kettle went back on. This time I.was.going.to.have.a.chocolate.digestive.to.go.with.it.and.NO.ONE.WAS.GOING.TO.STOP.ME ... there, I said it!
I stomped back upstairs, digestive crumbs tumbling down my chin and tea being swilled as if I was as parched as a pharaoh's flipflop... grrr. I used the bath mat to mop up the water, picked up the bowl and put it in the bath and dried the floor. Deep breath. I reached for the masking tape and taped off the rest of the room, using this as a distraction from the paint pot which was staring at me disapprovingly - you can just image it thinking - what sort of painting and decorating debacle have I come home to??
I sat on the steps into the room with the rest of my tea and texted Himself ... remind me why I wanted to paint the bathroom? I could mentally hear him chuckling - he knows and I'd forgotten how much I dislike painting walls.
Strangely enough the next stage of painting (apart from the difficulty in removing the curtain and the rail) went smoothly until I turned around to admire my work and saw that where the paint was now drying - it was patchy and the previous (cream-ish) colour was showing through. So..... I left the new wall drying, returned to the first half and gave another coat.
Are you still with me? If you think this is quite a slog to get to this point - imagine what it was like in real time!😂
Any hoo - I stopped for lunch - thought that Moss and I needed a breath of fresh air and seeing there was a break in the weather we nipped into the garden. Both feeling refreshed, I made a quick sandwich and then we (Moss goes up to bed and 'listens' to the radio in the bedroom!) returned upstairs. At this point I threw the curtain into the washing machine - might as well get the whole room looking clean and fresh.
This break had given the walls a bit of time to dry and I could see where I need to give second and in some cases a third coat - the paint is lovely and thick but I wonder if I'd rolled it a little to lightly initially. I applied the next layer a whole lot thicker to make up for that mwhahahaha
Suddenly I'd got all the way round and where it was drying was looking a whole lot brighter and cleaner. I decided that I'd had enough and I would clear up and let it dry fully. Plants were wiped and their pots washed (they are still waiting in the bedrooms until the paint has completely dried), shelves were washed and dried and are waiting in the spare room. The tiled part of the wall around the shower/bath area was washed and the floor wiped. The paintbrushes and rollers were cleaned and all the dust sheets rolled up and removed.
When I left the bathroom - it was like a mike drop - boom! 🎤 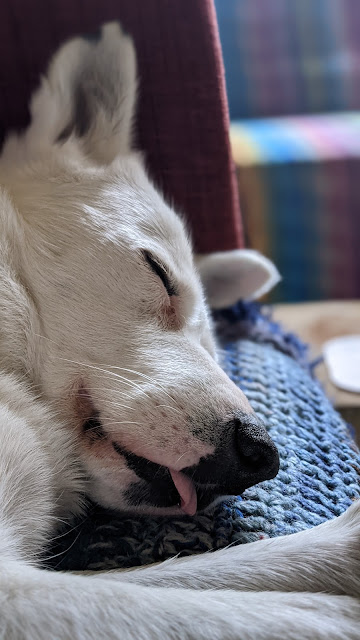 I am knackered! And as part of my 'recovery' I had yet another brew and sat with the cat and dog downstairs and caught up with some blogs. 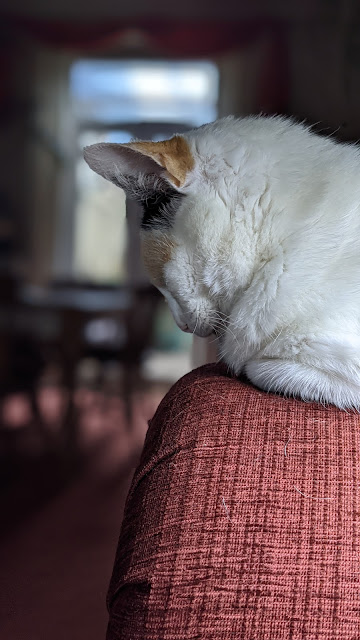 It is raining again/still outside and I think it is time to light the fire - I can feel the temperature has dropped.  Himself will be home soon and I want to see if the bathroom has dried enough to put back a few things but I suspect not - that might be a job for future me!😁☔