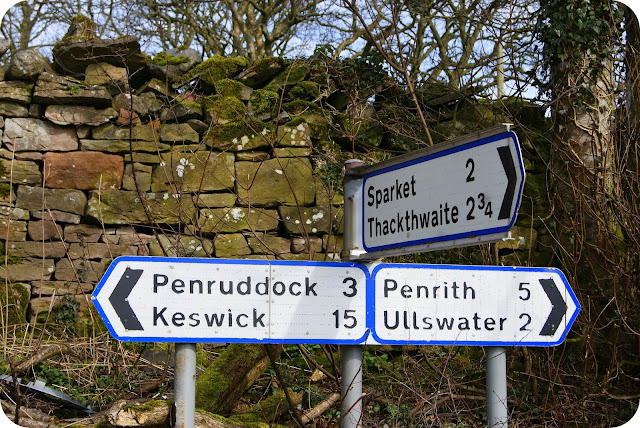 I have always be fascinated by village and town names. How they originated and their transformation through history to our present day versions.

I love being able to break down the word into the component parts to discover its meaning.

Penruddock (3) - could have two origins, one being Cornish as the surname Penruddock emanates from there, however my preferred version (seeing we are in the north) is based on the theory it comes from Cumbric, a common language from the early middle ages. Pen means hill and ruddock may have evolved from rhudd meaning red.  The soil in the area is a red sand stone - so that makes the translation quite believable.

Sparket (2)
This little place was more difficult to translate, however all my unscientific research pointed towards various historical spellings - Sparkhead from the year 1705 and Sparkehefd from 1323. Both entries refer to a mill alongside a river. Now - the word 'spark' has been linked to meaning 'a place by a .....' So may be the original meaning was the mill by the river? Who knows ? Some bright 'spark' might know!

Keswick (15)
In times past, this area was dominated by Scandinavian influence (ie Vikings!) who stamped not only their feet and their dominance on the Saxons but added their language to Saxon English.  Keswick means 'cheese farm'.  The earliest written forms were from 1276 - Kesewik, 1086 - Kesewick and in 1150 - Casewic. The 'wick' element of the word referring to 'farm' can also mean place, outlying farm or dwelling.

Penrith (5).
There is that word again - Pen = hill.  It is thought that 'rith' means ford as in 'crossing a river'. Modern day Penrith is bordered on two sides by rivers - so again, it does not seem that inconceivable that places were given descriptive names which also served as directions.

Hope I am not boring you!

Ullswater (2)
Also attributed to early middle ages Cumbric and thought to mean 'Ulf's Water (lucky Ulf!) It did however, have a bit of a name 'wobble' as in 1622 it was referred to as 'Vllesmere'. Mere however often occurs as an alternative to water or lake and it is possible that the written letter U - looks more like a V.

My favourite of all of those wonderfully wordy word word name places is - Thackthwaite.  Thwaite is a place name that crops up a fair bit.  It refers to  'a forest clearing with a dwelling or a parcel of land' However, finding 'Thack' was a bit more troublesome, eventually I came across an ancient meaning of 'cover' or 'thatch'. So it is easy to imagine that in among the trees a small clearing was a thatched dwelling......

Now, if you have got this far, either you have glazed over or have fallen asleep on the key board - either way - well done for staying this long :) Oh yes - before I forget - the study of village or town names is called Toponymy.

This is my contribution for day 3 of  the Advent Calender 2015, why don't you pop over to Julie's Scrapbook and see what the other contributors have got up to!